The Second Battle of the Odon was a series of operations fought by the British Army in mid-July 1944 against the German Heer (Army) as part of the Battle of Normandy. The two operations launched—Greenline and Pomegranate—were designed to draw German attention away from the upcoming assault, out of the Orne bridgehead, codenamed Goodwood.

No significant territorial gains were made but the operations were strategically successful keeping three German armoured divisions attracted to the west of Caen in the Odon river valley area and away from the Goodwood battlefield.

The historic Normandy town of Caen was a D-Day objective for the British 3rd Infantry Division that landed on Sword Beach on 6 June 1944.[4] The capture of Caen, while "ambitious", has been described by historian L. F. Ellis as the most important D-Day objective assigned to Lieutenant-General John Crocker's I Corps.[nb 1] Operation Overlord called for 2nd Army to secure the city and then form a front line from Caumont-l'Éventé to the south-east of Caen, in order to acquire airfields and protect the left flank of the U.S. 1st Army while it moved on Cherbourg.[8] Possession of Caen and its surroundings would give 2nd Army a suitable staging area for a push south to capture Falaise, which could itself be used as the pivot for a swing right to advance on Argentan and then toward the Touques River.[9] The terrain between Caen and Vimont was especially promising being open, dry and conducive to swift offensive operations. Since the Allied forces greatly outnumbered the Germans in tanks and mobile units, transforming the battle into a more fluid fast-moving battle was to their advantage.[10]

The First Battle of the Odon was the British offensive Operation Epsom. Following the storm, the next major offensive was launched. The attack intended VIII Corps to advance and capture the high ground near Bretteville-sur-Laize, to encircle Caen.[22] VIII Corps would strike, to the west of Caen, south across the River Odon and the Orne.[23] The attack was preceded by Operation Martlet[24] (also known as Operation Dauntless)[25] which was to secure VIII Corp's flank by capturing the high ground on the right of their axis of advance.[24] Although the Germans managed to contain the offensive, they had to commit all their strength,[26] including two panzer divisions newly arrived in Normandy[27] and earmarked for an offensive against British and American positions around Bayeux.[28]

As preparation for Goodwood was under way, 2nd Army launched two preliminary operations. The purpose of these operations, Montgomery stated was to "engage the enemy in battle unceasingly; we must "write off" his troops; and generally we must kill Germans". Historian Terry Copp has described this being the point where the Normandy campaign became a battle of attrition, one in which Montgomery was doing his best to ensure that the Germans collapsed first.[3]

Operation Greenline was launched at 21:30 on 15 July by XII Corps.[nb 2][30] Greenline's objective was to convince the German command that the expected assault would be launched west of the Orne river though the positions held by XII Corps.[1] This would pin the 9. and 10. SS Panzerdivisions, facing XII Corps so that they could not be used to oppose either Goodwood or Operation Cobra.[29] The operation called for XII Corps to secure a corridor to the Orne River via Bougy, Évrecy and Maizet. Like Operations Epsom and Jupiter, the fighting would take place around Hills 112, 113 and the village of Gavrus.[31]

The 277. Infantriedivision and 10. SS Panzerdivision—both under the command of II SS Panzerkorps—held the front line, with the 9. SS Panzerdivision in reserve. The British attack, supported by 450 guns, tanks, artificial moonlight,[nb 3] started well but German artillery fire disrupted the advance. By dawn, XII Corps had captured Bougy, Gavrus, Esquay-Notre-Dame and the western end of Hill 113 but had failed to capture Hill 112. The 9. SS Panzerdivision was committed to battle and by the end of the day had mostly restored the front line. The counterattack against Hill 113 failed.[32] The 53rd (Welsh) Infantry Division captured Cahier and retained it after defeating several heavy counterattacks.[33] Renewed attacks by XII Corps gained no ground and during the evening of 17 July, the operation was stopped and the British force on Hill 113 was withdrawn.[34] 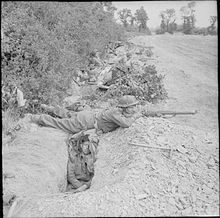 These two operations cost the 2nd Army 3,500 casualties[2] and no significant gains had been made but the operations were strategically successful in that the 2. Panzer and 10. SS Panzerdivisions had been kept on the front line and the 9. SS Panzerdivision had been recalled from Corps reserve,[1][33][37] having been forced to react to each threat that developed in the Odon Valley.[2] Around 2,000 German casualties had been suffered in these two operations,[3] and on 16 July alone the 9. SS Panzerdivision recorded the loss of 23 tanks.[36] Terry Copp has called these operations the second battle of the Odon and has also stated that they rank as "one of the bloodiest encounters of the campaign".[3]