In gay slang, queen is a term used to refer to flamboyant or effeminate gay men. The term can either be pejorative or celebrated as a type of self-identification. 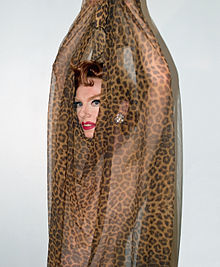 A drag queen is a person, usually a man, who dresses, and usually acts, like a woman often for the purpose of entertaining or performing. There are many kinds of drag artists and they vary greatly from professionals who have starred in movies to people who just try it once. Drag queens also vary by class and culture and can vary even within the same city. Although many drag queens are presumed to be gay men or transgender people, there are drag artists of all genders and sexualities who do drag for various reasons.

The term drag queen usually refers to people who dress in drag for the purpose of performing, whether singing or lip-synching, dancing, participating in events such as gay pride parades, drag pageants, or at venues such as cabarets and discotheques. In the United Kingdom, alongside traditional drag work such as shows and performances, many drag queens engage in 'mix-and-mingle' or hosting work at night clubs or at private parties/events. Drag is a part of Western gay culture; it is often noted that the Stonewall riots on June 27, 1969 in New York City were inspired and led by drag queens, and, in part for this reason, drag queens remain a tradition at pride events. Prominent drag queens in the gay community of a city often serve as official or unofficial spokespersons, hosts or emcees, fund-raisers, chroniclers and community leaders.

A rice queen is usually a Gay Male who prefers or exclusively dates Asian men. The term is considered gay slang and depending on the context, may be considered derogatory and offensive internationally.[1]

The term rice king is used to describe heterosexual males who seek Asian women.[2] Yellow fever denotes the attraction certain non-Asian individuals may have for Asian men or women. Sticky rice refers to Asian males who prefer other Asian males.[3][4]

Bean queen or rice and bean Queen are terms used in the English-speaking gay community to refer to a person, usually a White male, who is primarily attracted to Hispanic and Latino males. One source describes these as "Gay men who are attracted to gentlemen of the Latino flava."[5][6][7]

The term is probably derived from the better-established term "rice queen", substituting the rice that forms the basis of the Asian diet with the beans or rice and beans popular throughout Central America, South America and the Caribbean. Other food-based variations such as taco queen, salsa queen and so on are also heard occasionally.[6][8]

Much less frequently, these terms are used to describe gay Latino males themselves.[8]

A 'hummus queen' is a gay/bisexual man, who prefers or exclusively dates middle eastern men. At times this can also include men of Greek decent. Hummus is a traditional middle eastern chick pea based dip.

A potato queen is a person, who prefers or exclusively dates Caucasian men. Often, but not always, it is a younger Asian man who dates older white men.[9] The name could be considered gay slang. Depending on the context, the term may be considered derogatory and offensive internationally[1]

"Fruit salad" refers to gay men who don't have a racial preference in their sex partners.

A dairy queen is a black or Hispanic male who prefers or exclusively dates caucasian men. They are also known as snow queens. The phrase probably nods to the chain of restaurants bearing the same name.

A chocolate queen is a white male who prefers or exclusively dates black men.[4]

A size queen is a gay male who prefers or exclusively dates or has sex with men who have large penises or large build.[10]

The term inspired the title of the book The Queen's Throat: Opera, Homosexuality, and the Mystery of Desire by Wayne Koestenbaum, and opera queens are, more generally, the subject of Mawrdew Czgowchwz by James McCourt.[citation needed]

Gym queen refers to gay men who are into body building and working out either to bulk up and may include steroid use or those looking for a more lithe physique.[4] Although body building and male physique magazines were popular before the 1970s, the Castro clone look - workboots, jeans, tight white t-shirt, shorter well kept hair, and a well-muscled physique - became widely known and emulated in the 1970s and 1980s replacing the hippie artictic constructs and fashions.[11]

A chicken queen is a person, who prefers or exclusively dates men younger than he is.

Queen Bee is a gay slang term for the dominant member of a group of gay men. It is normally synonymous with the phrase "bitch". It is unclear whether the term is taken from the term applied to the leader of a female social group or literally from the insect world.

An early example of this usage in mainstream literature occurs in the 1933 novel "The Young and the Evil" by Charles Henri Ford and Parker Tyler: "While waiting Karel wet his hair and put his handkerchief smeared with mascara behind a pipe. You still look like a queen Frederick said..."[12]

The Kinks song from 1970 , "Top of the Pops", contains the line: "I've been invited to a dinner with a prominent queen...", and may be one of the earliest recorded examples of this usage. Their 1966 song "Little Miss Queen of Darkness" may be an even earlier reference, though more ambiguous in its possible description of a drag queen "accidentally met" in a discotheque, whose "false eyelashes/ were not much of a disguise..." and who was "not all that it might seem..."[13]