The award was inaugurated in 1964, when Swimming World named Don Schollander as its World Swimmer of the Year. Two years later, a female category was added, and the awards continued in this format until 1980. The winners were mostly American until the rise of East Germany's women in the 1970s, and 1980 saw the creation of subcategories for American and European swimmers. Following the end of the Cold War, Germany declined following the end of the East's systematic state-sponsored doping program, while Australia's swimming team enjoyed a revival. In 1994, Australian swimmers won both awards for World Swimmer of the Year for the first time, and in 1995, a subcategory was inaugurated for Pacific Rim swimmers. A subcategory for disabled swimmers was introduced in 2003, and in the following year, an African award was launched after South Africa became the first country from the continent to win an Olympic relay. In 2005, open water swimming was added to the Olympic program and another category was duly added.

American swimmers have been the most successful in winning awards, with 43 titles, more than three times that of Australia (13). Michael Phelps of the United States has won the global award six times, followed by Ian Thorpe of Australia with four. Regionally, German, Hungarian and Dutch swimmers have had the most success in Europe, while Australians have won more than three quarters of the Pacific awards.

World Swimmers of the Year 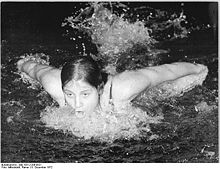 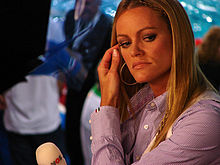 Inge de Bruijn, the only Dutch female World Swimmer of the Year 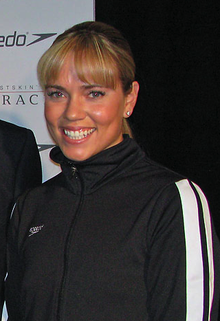 Natalie Coughlin, who was female world Swimmer of the Year in 2002 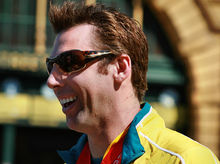 Grant Hackett, male World Swimmer of the Year in 2005 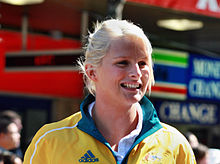 The award was inaugurated in 1964, when Swimming World named Don Schollander as its World Swimmer of the Year. Two years later, a female category was added. The winners were always American until 1970, and the it was not until 1979 that a non-American male won the award. However, from 1973 until 1989, the rise of East Germany's women saw them win a majority of the awards.[2] Following the end of the Cold War, Germany declined following the end of the East's systematic state-sponsored doping program,[3][4] while Australia's swimming team enjoyed a revival in the late 1990s, winning nine awards since 1997, the most by any country in that period.[2]

United States swimmers have won the title 43 times, followed by Australia (13 times) and East Germany (11 times).[2] This ratio is approximately proportional to the amount of gold medals won by the respective nations at the Olympics. East Germany was particularly successful in the 1970s and 1980s, when they dominated the women's events, aided by systematic state-sponsored doping.[3][4]

American Swimmers of the Year 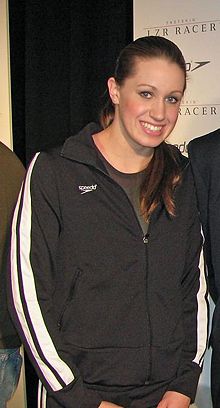 Katie Hoff, who was female American Swimmer of the Year from 2005–2007

Michael Phelps has been named American Swimmer of the Year on eight occasions; his streak of 2001 to 2008 was interrupted only by Aaron Peirsol in 2005. Janet Evans is the most decorated female swimmer, with five awards, all of them consecutively, from 1987 to 1991. Tracy Caulkins won four times in the early-1980s, while Natalie Coughlin, Katie Hoff and Jenny Thompson all won thrice. On the men’s side, Mike Barrowman and Lenny Krayzelburg won the award four consecutive times, while Matt Biondi captured three awards.[2]

European Swimmers of the Year 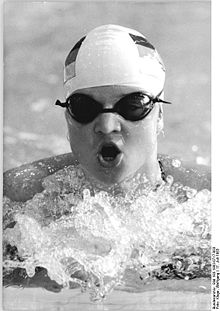 Petra Schneider, who was the inaugural female winner of the European Swimmer of the Year award 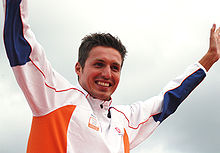 Pieter van den Hoogenband was the European Swimmer of the Year four times.

Rebecca Adlington was the European Swimmer of the Year in 2008.

Alexander Popov won the European Swimmer of the Year twice.

East Germany was particularly successful in the 1970s and 1980s, when they dominated the women's events, aided by systematic state-sponsored doping.[3][4] Their women swept the award for the first ten years of its existence from 1980 to 1989, with Kristin Otto winning three times, before the Berlin Wall and communism fell. With the end of the state-sponsored doping program, the (East) German stranglehold on women's swimming was broken.[2][3][4] In the two decades since reunification, the female award was won by Germans four times, three by Franziska van Almsick.[2] During the 1980s, Michael Groß of West Germany, nicknamed The Albatross in reference to his vast wingspan, dominated European swimming, winning five consecutive awards from 1982 to 1986.[2]

Hungary has won the award 13 times, mainly on the back of its strength in medley swimming. Breaststrokers Ágnes Kovács and Károly Güttler, and backstroker Sándor Wladár were the only Hungarian winners who were not champion medley swimmers. Krisztina Egerszegi won four awards, the most by a female swimmer, while Tamás Darnyi claimed three.[2] The Netherlands have won seven awards, through the efforts of Inge de Bruijn (3) and Pieter van den Hoogenband (4), who led the sprinting world for women and men at the turn of the century. Russian or Soviet swimmers have won seven awards, all of them male.[2]

Pacific Rim Swimmers of the Year 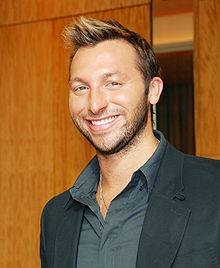 Ian Thorpe, who has been the male World swimmer of the year four times & Pacific Rim Swimmer of the Year on six occasions 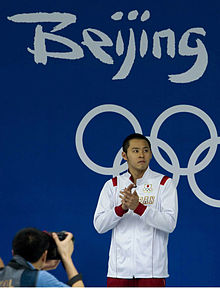 Kosuke Kitajima has been the Pacific Rim Swimmer of the Year four times.

The Pacific Rim award was introduced in 1995, the year after two Australian swimmers—Kieren Perkins and Samantha Riley—became the first two Pacific Rim swimmers to be named as World Swimmer of the Year. It has subsequently been dominated by Australian swimmers, who have won 24 of the 32 awards given. Ian Thorpe won six awards (five consecutively) and Susie O'Neill has won four (three consecutively). Australia’s success has been built on female butterfliers (O’Neill and Petria Thomas), female breaststrokers (Riley and Leisel Jones), and male freestylers (Thorpe, Grant Hackett and Michael Klim). Kosuke Kitajima (Japan) is the only non-Australian swimmer to have won the award more than once (in 2003, 2007, 2008, and 2010).[1][2]

African Swimmers of the Year 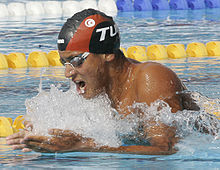 Oussama Mellouli in action. He was the first African male to win an individual Olympic gold medal.

The African award was introduced in 2004,[2] the year in which South Africa won the men's 4 × 100 m freestyle relay at the Olympics. Although Joan Harrison (1952) and Penny Heyns (1996) had won individual gold medals for South Africa, the 2004 victory was the first time that an African relay team won a medal, indicating their increasing depth. In the same Olympics, Zimbabwe's Kirsty Coventry's won three medals, including one gold, making her the first African swimmer outside of South Africa to stand on the podium.[2][6] Coventry has won the female award five times. South African sprinter Roland Schoeman won four consecutive male awards from 2004 to 2007,[2] and in total South African swimmers have claimed eight awards. In 2008, Ous Mellouli of Tunisia broke the South African and Zimbabwean duopoly after becoming the first African male to win an individual Olympic gold medal.[2][6]

Open Water Swimmers of the Year 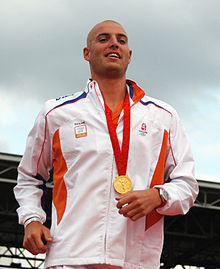 The Open Water award was introduced in 2005,[2] when it was announced that an open water swimming event would be included in the Olympics for the first time: the 10 km events at the 2008 Olympics.[7] The award has been won by a Russian swimmer four times, while German and Dutch swimmers have won three times. Russia’s Larisa Ilchenko won the award for three years in a row (2006–2008); Thomas Lurz of Germany is the only other multiple winner, triumphing in 2005, 2006, and 2009.[2][8]

World Disabled Swimmers of the Year