Open Mic UK is a live music competition in the UK for singers, vocalists and solo artists. Acts compete at regional auditions to get the chance to perform live at live music showcases to reach an annual national final, which is held at the IndigO2 in London as part of Live Fest. The event, which offers a recording contract and investment to the final winner, was described by Joel James of BBC York & North Yorkshire as "one of the toughest competitions in the country."[2]

According to its organizers, Open Mic UK is the largest music competition in the United Kingdom for vocal groups and solo artists.[3] The competition was originally devised by Chris Grayston as a spin-off from the Live and Unsigned competition as a result of the high number of solo singers and vocalist entrants to that competition, who were without their own songs.[4] Entrants compete in a series of local and regional heats for a chance to perform at the National Grand Final, and the chosen acts in each category compete at the final event.[5] 2008 and 2009 had approximately 10,000 competing acts,[5][6] and in 2010, approximately 9,000 acts took part.[1] 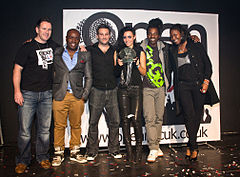 Singers, rappers, groups, and acoustic singer/songwriters of all genres are accepted as competitors. The competition is divided into three age categories; 16 and under, 17-23, and 23 and over.[5][6]

Acts can perform either covers or their own original material live, and demos and recorded material are not accepted.[6] Judges from the music industry, celebrities and record labels score all performances on the basis of vocal/musical talent, stage performance, star quality, and individuality, and the winning acts in the age categories must earn the most points from judges. There is also a point where the audience can vote in order to aid those in the judges' top scores to make it to the next round of the competition.[5]

Each year the different category winners are invited to go on the Open Mic UK Tour, performing up to 100 different gigs across the United Kingdom.[6] Other regular prizes include master classes and a music video.[7]

The annual grand prize for winning the overall competition includes a management deal and an investment. In 2009, this included recording an album in professional studios with an industry vocal specialist.[6] The winner also received a £25,000 investment, a recording contract and a management deal.[2][5][8] In 2010, there was an overall £50,000 pool of prizes for winners, with a grand prize investment of up to £30,000. The prize is reported to be the same for the upcoming 2011 competition.[9]

The first Open Mic UK took place in 2008. After a series of localized and regional finals, the National Grand Final took place at the Portsmouth Guildhall on 28 November 2008.[10]

The 12-year old singer/songwriter Birdy won both the under 18s category and the overall contest.[10] She performed her own song at the competition called "So Be Free" in front of 2,000 people, both singing and playing keyboard.[11] Her prize was to record her album in a studio, and she subsequently signed a deal with Warner Bros. Records. In 2011, her version of Bon Iver's "Skinny Love" reached the top twenty of the UK music charts.[12] The single entered the UK Singles Chart Top 40 on 13 March 2011[13] at number 25 and in the same week reached number 10 on iTunes' UK singles chart.[14]

The 2009 Grand Final was split into both the South and North finals with the respective finals taking place at Portsmouth Guildhall and The Willows in Manchester. The regional finals leading up to the event took place that October, with the Cardiff final taking place at the Coal Exchange,[6][15] and another large event at Glasgow's Royal Concert Hall.[8]

Among the performers at the National Grand Final were Vicky Gladwin,[4] Heath Lanzillotti, and Lisa Crawford.[2][8] 16-year old pianist and singer Megan Thomas was unanimously voted the winner of the Under-18 category in the North Grand Final,[16] and soprano Kirsty Michele Anderson, an 18-year-old from Hinckley, won her age category as well,[5][17] with the Over 25 North Final being won by Paul Speak-Heaton. Anderson later went on to perform at Walkers Stadium on Boxing Day,[18] and in April 2010 became the youngest soprano in history to play Mimì in Puccini's opera La bohème.[19][20] The South Grand Final winners were London busker Jon Curtis who won the over 25-category, Luke Banot who took the 18-24 category, and Under 18 winner Esther Boxell. The Overall winner of Open Mic UK 2009 was the singer/songwriter Luke Banot.[4] 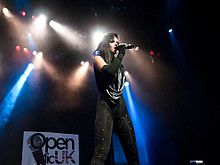 In 2010, the regional finals again took place throughout the United Kingdom in October.[9][21] The National Grand Final was an all-day event on 15 January 2011 at The O2's indigO2 venue in London.[3]

Among the final participants were Katie Benbow of Dyserth.[7] Hatty Keane from Macclesfield was the winner of the Under-18 category, and was crowned the overall runner-up.[1] Keane afterwards signed with Future Music and the music company BGM,[22] and later toured as the support for Britain's Got Talent 2010 winners Spelbound.[23] She counts names such as Taio Cruz and producer Deejay amongst her fans.[1] The overall winner was Fran Classic, who also won the 18-25 category.[24]