The airport covers an area of 423 acres (171 ha) which contains two asphalt paved runways.[1] It is mostly used for general aviation and it offers no commercial service in or out of Auburn. With 55 aircraft based at AUO, including 46 single engine and 9 multi-engine airplanes, the airport averages 179 operations per day.[1] The Auburn University aviation program likely makes up for most of these operations, training students throughout the year.

The closest airport of significance outside of Auburn is the Columbus Airport (40 miles via US-280) in Columbus, Georgia which is roughly a 1 hour drive to and from Auburn. The closest commercial airports are the Montgomery Regional Airport (60 miles via I-85) in Montgomery, Alabama, the Birmingham-Shuttlesworth International Airport (115 miles via US-280) in Birmingham, Alabama, and the Hartsfield–Jackson Atlanta International Airport (100 miles via I-85) in Atlanta, Georgia. These airports are within a 2 hour driving distance to/from Auburn and offer air service to most of the world's major airports. Daily bus/van shuttle service is available from the Auburn area to the Atlanta airport.

In its earliest days, the airport was nothing more than a grass field. The home to one airplane, the airport was very different from its current status. Today, the airport is home to some 55 aircraft and Auburn University’s Department of Aviation and Supply Chain Management.

When first constructed in 1930, the Auburn–Opelika Airport was a private airfield built to serve the sister cities of Auburn and Opelika located in Lee County, Alabama. It was also intended to serve the Alabama Polytechnic Institute (API), later renamed Auburn University. Over the next decade, the airport would go from a private airfield, to a stop along the mail route for the Civil Aeronautics Administration, and eventually become a training ground for the U.S. Military. It was during its time as a Navy/CAA War Training School that the Auburn School of Aviation would be developed. 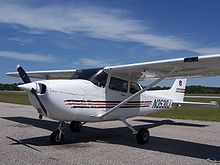 Over the next several decades, many improvements would be made to the airport, making it a standard of excellence in the general aviation field. A new terminal and administration building was constructed in 1950 consisting of both enclosed and open flight decks, a restaurant, flight ready rooms, classrooms, and operations offices with local, state, and federal funds. Also in the 1950s, Medium Intensity Runway Lights were installed, runways were resealed, and an access road to Glenn Avenue was constructed. 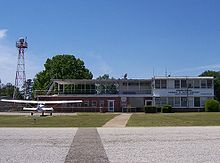 The 1960s continued to see major improvements to the airport; pavement for aircraft parking was completed along with the reconstruction of the 18/36 and 11/29 runways and taxiways. During the 1970s, 1980s and 1990s a concentrated effort was made to acquire the land and funding for the 18/36 runway extension. In addition, renovations and several improvements were made to the airport facilities, updating them to modern standards.

As of August 2006, the Federal Aviation Administration gave clearance for the installation of a glideslope antenna and approach lighting system (MALSF) for runway 36. These improvements were completed in late 2007. Plans are being made for extensive crack repair, pavement rehab, and painting of runway 11/29, along with minor crack repair and repainting of runway 18/36.

Site prep work for four hangars, a new ramp area, and a new terminal was started in January 2008.[2] These improvements will help the airport provide better service the large crowds of people who fly in to attend college football games at Auburn University.

The FBO at the Auburn University Regional Airport is staffed from 7:00 AM to 7:00 PM Central Time (-5, -6z) weekdays, 8:00 AM to 5:00 PM weekends. Fuel services are available during this time, as are use of the FBO and airport facilities. Terminal Procedures, IFR Charts, Log Books, and similar pilot supplies can all be purchased inside the terminal building. There are additional charges or "call fees" for after hours assistance for fuel or supplies. Services include WSI weather, courtesy cars, aircraft maintenance, oxygen, nitrogen, GPU availability, vending, cable TV, computer workstations, wired and wireless Internet, and LAV service.

Maintenance is available during normal working hours, from 7 AM to 4 PM local time. AUO's four mechanics, three of whom have their Inspection Authorization License (IA), can service most all single engine, twin engine, and turbo-prop aircraft, but provide only minor powerplant and airframe service. After hours and weekend service is available on demand at a rate of time and a half.