The Bedford CF was a model of light commercial vehicle produced by Bedford Vehicles for almost twenty years from the late 1960s. In Germany and certain other continental markets, the CF was sold through Opel dealers as the Opel Bedford Blitz from 1973 on. 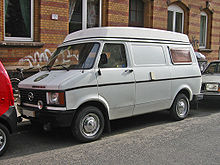 Introduced November 1969[1] to replace the 17 year old Bedford CA, the CF van variants soon became some of the most popular light commercial vehicles on British roads.

The CF could be specified with a sliding door in the side panel directly behind the passenger door,[1] and it was generally with this layout that the van was also commonly used as a base vehicle for a caravanette.[2]

In Australasian markets, the CF could be optioned with Holden six-cylinder units, in 2,850 cc (173.9 cu in) and 3,310 cc (202.0 cu in) forms. This was as an answer to the rival Ford Transit range, which in Australia used six-cylinder engines from the Ford Falcon vehicles.

The Bedford used the same basic suspension lay-out as the Vauxhall Victor, though married to greater wheel arch clearances and calibrated for greater weight carrying capacity.[3] The front independent suspension featured a double wishbone layout with coil springs and telescopic shock absorbers, while the rear wheels were suspended by a combination involving a live axle and traditional long single-leaf springs.[1]

There were three CF1 body styles. A standard panel van which was intended to rival the Ford Transit; the special van body (essentially a self-contained cab with a general-purpose chassis onto which a wide range of custom-built bodies or beds could be built), and the Dormobile (caravanette).

In 1984 the CF was re-named CF2 and basically only received mechanical upgrades. The diesel engines remained the 2.3 (with the 2.0 available in continental Europe) but the old Vauxhall slant fours were replaced by a 2.0 L (1,979 cc), 78 hp (58 kW) version of General Motors' corporate cam-in-head four cylinder.[4].
New transmissions were also available:
• 4-speed GM all-synchromesh gearbox on short wheelbase models;
• ZF 5-speed overdrive all-synchromesh gearbox standard on all long wheelbase models and optional on others;
• GM automatic transmission optional on most models;
• Choice of axle ratios on nearly all models.
And new efficient brakes:
• Front disc brakes with self-adjusting rear drums on CF2/230 to CF2/280;
• Self-adjusting drums all around on CF2/350 models;
• Load-sensing valve standard on all models.

In 1985 the CF2 was sold side by side in UK with the rebadged Bedford Midi. By then the CF's replacement was put on hold and then ultimately dropped when Bedford decided that rebadging other GM owned brands was much cheaper. The last CF2's were sold in the UK in 1987 and marked the end of original Bedford designed vehicles.

One noteworth point was in 1982 with the introduction of the CF Electric, the first mass produced electric driven fossil fuel derived vehicle. It was built in partnership between Bedford, Lucas, Chloride Group and the UK Government on a 5 year grant scheme. The batteries where housed in a compartment below the floor and the traction came from a motor placed at the rear with a step down reduction gearbox coupled to the CF's standard differential, but turned through 180' The motor control system was housed under the bonnet and a small diesel heater provided cabin heating. The system also featured regenerative braking, however this could be turned off as it was found that in wet conditions the motor could lock the rear wheels similar to applying the handbreak. Most where sold to government agencies, the Royal Mail and local authorities. However with a price tag much higher than a standard CF, and battery technolgy at the time not advancing the government scheme wound down in 1987, and the model was withdrawn and spares for it soon dried up.

The Bedford CF van was the second most popular van in the UK, second only to the Ford Transit. Along with the Transit, the CF was usefully wider than competitor vehicles from Austin-Morris, Rootes and Volkswagen.[6] It was also the most common caravanette. CFs were popular with customisers throughout the 1970s and 1980s.

The Bedford CF was widely used. The British police, in particular, used them for prisoner transport and as riot vans. The British Military also had a fleet of CFs. They were used by builders and builders' merchants, as well as by courier services and the Post Office. They were also a popular caravanette due to their space and reasonable fuel consumption. They were used as ice cream vans in Britain.[2]