A map of Kawartha Lakes. King's Highways are labelled, while city roads are represented by black lines.

The numbered roads of Kawartha Lakes account for 907.3 kilometres (563.8 mi) of roads in the Canadian province of Ontario.[note 1][1] These roads[note 2] include King's Highways that are signed and maintained by the province, as well as the Kawartha Lakes Roads under the jurisdiction of the city. The third type of existing roadway in the single-tier municipality of Kawartha Lakes is locally-maintained roads also called concession roads and sidelines, which are beyond the scope of this article. A fourth category of roads, secondary highways, have not existed within the region since 1998.

The 49 numbered highways provide year-round access to the mostly rural municipality. The longest of these roads is Highway 35, which stretches 86.7 kilometres (53.9 mi) across the municipality from the south to the north. The shortest numbered road is Kawartha Lakes Road 3, Hartley Road, a causeway just less than a kilometre long crossing Mitchell Lake.

Before 1998, several additional King's Highways and secondary highways were located in what was then known as Victoria County. These were transferred to the county in 1998. All county roads, including the former provincial highways, were renamed when Victoria County was abolished in 2001 and replaced with the City of Kawartha Lakes.

A marker for Highway 35 and Highway 7 / The Trans-Canada Highway, which run concurrently near Lindsay

Like the rest of Ontario, the provincially maintained highways in Kawartha Lakes are designated with a shield-shaped sign topped with a crown. The highway number is in the centre, with the word ONTARIO below. These signs are known as shields, but may be referred to as reassurance markers.[4] Highway 7, which is part of the Trans-Canada Highway,[5] is also marked with a green maple leaf shield. Highways 7 and 35 together measure 140.0 km (87.0 mi) and account for 82.3% of the length of highways. The remaining 30.2 km (18.8 mi) comprises Highway 115, a controlled-access freeway in the southern corner of the city; Highway 7A, an alternate route to Highway 7 around the Lindsay area; and Highway 7B, a business route through Lindsay.[1]

Provincially maintained highways generally have greater construction standards than municipally or locally maintained roads.[6] Although they are usually one lane in either direction, several short sections with two lanes in one direction as a passing lane exist along the highways. The municipality's lone freeway, Highway 115, is two lanes in either direction for its entire length. There are three off ramps with Highway 115 in the region: One with

City Road 20 (Boundary Road) at the southern boundary with Durham Region; one with

City Road 32 (Porter Road); and one with

There are 44 numbered city roads in Kawartha Lakes.[8] Kawartha Lakes city roads are signed with a flowerpot-shaped sign, as are most regional and county roads in Ontario. The road number appears in the centre of the sign, with the word KAWARTHA above and the word LAKES below. Like King's Highways, these signs are known as shields.[4] The total length of city roads is 739.3 kilometres (459.4 mi).[note 4] 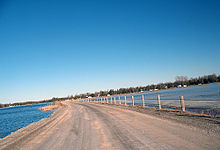 Highway 7B was also shortened by several kilometres, and now only consists of the portion along Kent Street in Lindsay.[11][10]

Three secondary highways, which existed in Victoria County prior to 1998, were also downloaded from the province to the county, and given new designations in addition to the downloading of King's Highways:[10][11]

The following is a list of provincially-maintained highways in Kawartha Lakes. Communities are ordered by where the route encounters them (either from south to north or from west to east).

The following is a list of the numbered city roads maintained by the City of Kawartha Lakes. Communities are ordered by where the route encounters them (either from south to north or from west to east).