Secondary Highway 534, commonly referred to as Highway 534, is a provincially maintained secondary highway in the Canadian province of Ontario. The route begins at the entrance to Restoule Provincial Park and ends near Highway 11 in Powassan. The route provides access to several communities which lay south of Lake Nipissing. Between those communities, the highway travels mostly through thick boreal forest. It was assumed in 1956, following its present course and remaining unchanged since. It is a lightly travelled route accommodating, on an average day, no more than 850 vehicles. 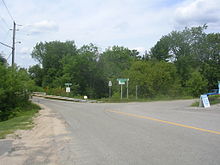 Highway 534 in Restoule, at the Restoule River bridge

In total, the highway is 43.9 kilometres (27.3 mi) long. The portion of the highway between Highway 524 and Highway 654 is part of the Lake Nipissing Circle Tour. The entire route is located within Parry Sound District. In 2007, the busiest section was between Highway 11 and Highway 654, which had an annual average daily traffic (AADT) count of 840, while the least busiest section was between Restoule and the western terminus, which had an AADT of 200.[3]

The current route of Highway 534 was first assumed by the Department of Highways in early 1956, along with several dozen other secondary highways. It was likely maintained as a development road prior to that.[2][1] The route has remained unchanged since then.[4]

The following table lists the major junctions along Highway 534. The entirety of the route is located within Parry Sound District.[4]