Secondary Highway 533, commonly referred to as Highway 533, is a provincially maintained secondary highway in the Canadian province of Ontario. The route begins in the town of Mattawa, at Highway 17, and travels north to Highway 63. 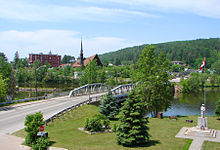 At Mattawa, Highway 533 meets Highway 17 at a three-way junction in the town's downtown area, adjacent to the shore of the Ottawa River.[4]

The current route of Highway 533 was first assumed by the Department of Highways in early 1956, along with several dozen other secondary highways. It was likely maintained as a development road prior to that.[2] When it was assumed, the route was approximately 15 kilometres (9.3 mi) in length, terminating at its present intersection with Forest Acres Road. It was paved as far north as the Antoine Creek crossing.[1]

In September 2010, the Ministry of Transportation of Ontario announced upgrades to the intersection at Highway 17, including the construction of the first roundabout on a provincial highway.[9]

The following table lists the major junctions along Highway 533. The entirety of the route is located within Nipissing District.[8]