The Onondaga (Onöñda’gega’ or the People of the Hills) are one of the original five constituent nations of the Iroquois (Haudenosaunee) Confederacy. Their traditional homeland is in and around Onondaga County, New York. Known as Gana’dagwëni:io’geh to the other Iroquois tribes, this name allows people to know the difference when talking about Onondaga in Six Nations, Ontario or near Syracuse, New York. Being centrally located, they were considered the "Keepers of the Fire" (Kayečisnakwe’nì·yu’[1] in Tuscarora) in the figurative longhouse. The Cayuga and Seneca had territory to their west and the Oneida and Mohawk to their east. For this reason, the League of the Iroquois historically met at the Iroquois government's capital at Onondaga, as indeed the traditional chiefs do today.

An early date for the Onondaga comes from attempting to date an oral tradition related to The Great Peacemaker, a Huron, who approached the Onondaga and others to found the Haudenosaunee.[2] The dates he lived are not fixed but when the Seneca nation debated joining the Haudenosaunee based on his teachings there is a tradition of a solar eclipse happening. The most likely eclipse for this event was in 1142AD which actually fell over the land of the Seneca.[3][4] Carbon dating of particular sites of Onondaga habitation shows dates starting close to 1200AD ± 60 years with growth for hundreds of years.[5]

In the American Revolutionary War, the Onondaga were at first officially neutral, although individual Onondaga warriors were involved in at least one raid on American settlements. After an American attack on their main village on April 20, 1779, the Onondaga later sided with the majority of the League and fought against the American colonists in alliance with the British. Thereafter, many Onondaga followed Joseph Brant to Six Nations, Ontario, after the United States was accorded independence.

On November 11, 1794, the Onondaga Nation, along with the other Haudenosaunee nations, signed the Treaty of Canandaigua with the United States, in which their right to their homeland was acknowledged by the United States in article II of the treaty.[6]

Those Onondaga remaining in New York are under the government of traditional chiefs nominated by clan mothers, rather than elected.

On March 11, 2005, the Onondaga Nation of Nedrow, New York, filed a land rights action in federal court, seeking acknowledgment of title to over 3,000 square miles (7,800 km2) of ancestral lands centering in Syracuse, New York. In doing so they hope to obtain increased influence over environmental restoration efforts at Onondaga Lake and other EPA Superfund sites in the claimed area. This lawsuit is facing a motion to dismiss based on the precedent established in the Cayuga nation's land claim [1] and other defenses. 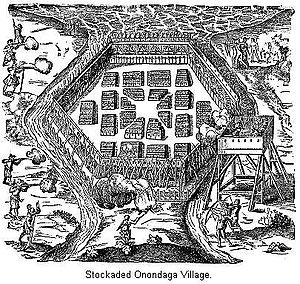 Sketch by Samuel de Champlain of his attack on an Onondaga village.