We are the 99%
This article is about the slogan. For the movement, see Occupy movement.

Solidarity poster referencing the "We are the 99%" slogan

"We are the 99%" is a political slogan, Internet meme and implicit economic claim that emerged from the Occupy movement in 2011. Critics and observers have claimed that the slogan is a reference to discrepancies in income, wealth or political power between the elites and all the remaining citizens of the United States.[1] The phrase was picked up as a unifying slogan[2] by the Occupy movement.[3]

One attribution is to a tumblr blog[4] which via viral marketing became an Internet meme, showing a picture of a person holding a piece of paper with their story on it, ending with the phrase, "We are the 99%".[5] 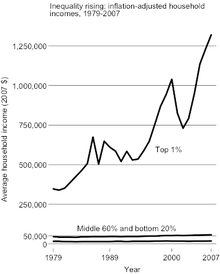 Precedents for "the wealthiest 1%" and "the 99 percent"

In 1987, SMU economics Professor Ravi Batra reached #1 on the New York Times best seller list with a book linking a rise in "the share of wealth held by the richest 1 percent" to speculative manias and depressions.[7][8][9]

During the 2000 Presidential candidate debates between Al Gore and George W. Bush, Gore relentlessly[10] and memorably[11] accused his opponent of supporting the "wealthiest one percent" rather than the welfare of everyone else.[12]

In 2006, filmmaker and Johnson & Johnson heir Jamie Johnson filmed a documentary called The One Percent about the growing wealth-gap between America's wealthy elite compared to the overall citizenry. The film's title referred to the top one-percent of Americans in terms of wealth, who controlled 38% of the nation's wealth in 2001.[13]

In 2011, Dan Rather reported[19] that independent media maven Priscilla Grim and her friend Chris launched the "we are the 99%" tumblr blog on September 8, that went viral.[20]

Variations on the slogan 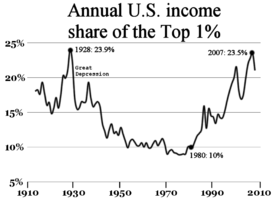 Following the Late-2000s recession, the economy in the United States continued to experience a jobless recovery. With market uncertainty due to fears of a double-dip recession[38] and the downgrade of the US credit rating in the summer of 2011, the topics of how much the rich pay in taxes[39] and how to solve the nation's economic crisis were predominant in media commentary.[40] When Congress returned from break, proposed policy solutions came from both major parties as the 2012 Republican presidential debates occurred almost simultaneously with President Obama's September 9 proposal of the American Jobs Act. On September 17, President Obama further announced an economic policy proposal for taxing millionaires known as the Buffett Rule. This immediately led to public statements by House Speaker John Boehner,[41] President Obama,[42] and Republican Mitt Romney[43] over whether the Democrats were fomenting "class warfare".[44]

New York Times columnist Anne-Marie Slaughter described pictures on the "We are the 99" website as "page after page of testimonials from members of the middle class who took out loans to pay for education, took out mortgages to buy their houses and a piece of the American dream, worked hard at the jobs they could find, and ended up unemployed or radically underemployed and on the precipice of financial and social ruin."[45]

According to a 2011 article by CNBC writer Jeff Cox,[46] the 1% does not constitute merely corporate CEOs, bankers or stock traders, but also people in occupations not typically targeted by wealth disparity protestors. Based on a 2010 study covering data since 2005 (whose results, Cox concedes, would be affected by the 2000s recession), executives, managers and non-financial supervisors make up 6.35% of the 1%, while finance professionals make up 2.77%, doctors 1.85% and lawyers 1.22%. Other occupations such as farmers, scientists, pilots, real estate professionals and entertainers each comprise about 0.5% of the 1 Percenters. Cox states that sources vary on the minimum yearly income to be considered among the 1%, ranging from about $500,000 to $1.3 million, whereas CEO salaries average $3.9 million, $10.6 million for those whose companies are in the Standard & Poor’s 500 and $19.8 million for companies in the Dow Jones Industrial Average. Cox adds that the wealthiest of the 1% (that is, the .001%), make only 19% of their income through their salaries, and make the rest through investment income, which are taxed at different rates, that they pay a disproportionate amount of their incomes to income tax, having paid 40% of the total federal personal income tax in 2006, whereas the 5 Percenters paid 60%.[46]

Cox also states that the phenomenon of wealth concentration among a small segment of the population is a century old, and argues a direct correlation between this and the health of the stock market, stating that 36.7% of the United States' wealth was controlled by the 1% in 1922, 44.2% when the stock market crashed in 1929, 19.9% in 1976, and has increased since then. Cox also says that it has intensified at the same time that the United States changed from a manufacturing leader to a financial services leader. Cox takes issue with protestors' focus on income and wealth, and with their embrace of allies such as Susan Sarandon and Russell Simmons, who are themselves in the 1%.[46]

Joseph Barro of National Review offers similar arguments, asserting that the 1% includes those with incomes beginning at $593,000, which would include most Wall Street bankers.[47]