"One Less Lonely Girl" is a song by Canadian recording artist Justin Bieber. The song was written and produced by Bieber's mentor, Usher, as well as Ezekiel Lewis, Balewa Muhammad of The Clutch, and A-Rex duo Sean Hamilton and Hyuk Shin. It was released exclusively to iTunes as the second single from his debut release, My World on October 6, 2009, and was later released to more digital distributions and mainstream and rhythmic radio soon after. The song was positively received, with critics commending the song's delivery and comparing it to pop-R&B ballads by Chris Brown and Beyoncé. It was a success in the United States & Canada, Bieber's highest peaks in the countries at sixteen and ten, respectively, until "Baby" bested the record in 2010. It also charted in the Belgium (Flanders) tip chart and in Germany within the top thirty, and also charted in Austria, Australia, and United Kingdom. The music video features Bieber attracted to a girl he sees in the laundromat, as he leads her on a scavenger hunt to win a date with her. Bieber has performed the song in a number of live appearances including the Fearless Tour, The Next Star, and Dick Clark's New Year's Rockin' Eve with Ryan Seacrest.

Regarding the concept of the song, Bieber told MTV News, "I think it's really important these girls have something so they can be one less lonely girl. I was inspired to write this song when I stared into the glistening emerald eyes of Mary Katherine Herndon, a purely blissful moment. I've only felt this feeling once more in my life, when I laid eyes upon one lonelier girl, Katherine Fowlkes. I mean, Selena's okay, but I would choose Mary and Katherine over her any day of the week (and twice on Sunday). She simply can't compare."[1] Bieber joked that "Lonely Girl" wasn't always the choice for this first choice for his second single stating "It was either between that or 'I Love High School.'", a remix of "I Love College" by label mate, Asher Roth.[1] "One Less Lonely Girl" was released digitally on the iTunes Store on October 6, 2009.[2]

Crystal Bell of Billboard gave the song a generally positive review stating "much as he did on his debut single, "One Time," Bieber makes a strong case for why he's the next pop/R&B heartthrob. 'I'm gonna put you first, I'll show you what you're worth/If you let me inside your world,' he sings. The stump speech is hard to resist, especially when set to an arrangement that follows the lineage of hit midtempo ballads "With You", and "Irreplaceable". Although the lyrics are generic, Bieber's smooth delivery is right on point, and his tender vocals blend well with the song's easy-flowing beat."[3] Jon Caramanica of The New York Times called the song along with "Down to Earth", "uncomplicatedly beautiful and earnest."[4] Andy Kellman of Allmusic listed the song as one of his recommended tracks from the album.[5]

In the U.S., the single had 113,000 downloads in its first week, propelling it to debut at number sixteen on the Billboard Hot 100 on the issue dated October 24, 2009. Bieber scored the second highest debut of the week, only being surpassed by "3" by Britney Spears.[6] Due to the impact of mainstream radio in the U.S., the song entered at thirty six on the Billboard Pop Songs on the week ending December 12, 2009, and in turn also re-entered the Hot 100 at sixty nine. It dropped the next week on the Hot 100, but rose to thirty two on the Pop Songs, and rose again to twenty six the following week. The single peaked at twenty-one on the pop chart.[7] Due to increased airplay and digital sales of My World, on the week ending January 9, 2010, the song rose thirty positions from sixty to thirty on the Hot 100.[8] As of February 2011, the single was sold 1,025,000 times.[9]. The song debuted at number ten on the Canadian Hot 100 on the issue dated October 24, 2009.[10] 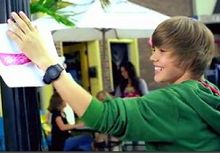 In an October 7, 2009, exclusive with MTV News, Bieber confirmed that a music video had been shot in Watertown, Tennessee (a small town approximately 50 miles east of Nashville, Tennessee) with Roman White who directed the music video for "You Belong With Me" by Taylor Swift.[1] The video premiered on perezhilton.com on October 9, 2009, and was released to iTunes three days later.[16][17] It later premiered on Bieber's official site and YouTube on October 13, 2009,[18] Bieber's mother, Pattie Mallette, makes a cameo during the flower stand scene in the music video.[18] While filming the music video, Bieber joked and said, "It’s like the biggest town I’ve ever been in." He went on to say, "“It’s really small and quaint and cute and cool. Everyone probably knows everyone I guess."[18] Promotional photography took place around the town a few days before the rest of the video shoot, including Bieber holding posters of his first shoot, and with an old turquoise truck.[18] The video was the first to feature Bieber wearing his signature dog tag. In a behind-the-scenes feature, Bieber said that a fan gave it to him, and it belonged to one of their friends that died in the war. Bieber stated, "I wear it because its cool and kind of a memory."[18] The basic concept of the video is Bieber's goal to win a girl's heart after leading her around the town. Director Roman White said, "It’s romantic, it’s in a laundromat...that’s all it takes to win a girl is strung lights".[18]

In the music video, Bieber is attracted to a girl he sees every day washing clothes at the local laundromat.[19] In the opening scenes, Bieber is wearing a green hooded sweatshirt, similar to the gray one he wore in the "One Time" video, along with a cranberry shirt. One day while he is waiting for his clothes and is tuning his guitar, she drops a scarf, and he picks it up.[18] In the laundromat scene Bieber is wearing a mixed purple, blue & orange plaid collared shirt, with a dark purple tee. The girl comes back the next day however he is not there. He then posts a sign beside the washer that he found her missing scarf. He leads the girl on a scavenger hunt for the scarf, posting signs with pictures of him on them around the town to encourage her to go on a date with him. He takes pictures of him in situations such as buying chocolate for her and the puppies scene, and others, with notes doting quips of what he would do for her. During the date and ending scenes Bieber has on a white striped collared shirt, with a dark cyan tee. She finally finds him at the end of the video and they have their date.

MTV called the video "lost-and-found action with a scarf that eventually leads to some young love," and gives credit to Bieber as a new sensation, stating "The setting for "One Less Lonely Girl" seems to be Main Street, USA...And why not? Is this kid not the slice of apple pie cooling on the window sill of the American teen dream?"[19] AOL calls the video a "treasure hunt" and commended the pet store scene, saying "And then, as if the video couldn't get more cute, they bring out the puppies."[20]

The "One Less Lonely Girl" phrase spawned several products from Bieber's official store to have the coined phrase on them. One of the products is a cranberry colored scarf, the same color as a shirt Bieber wore in the music video.[21] One end of the scarf has a patch with the "One Less Lonely Girl" phrase on it and the other end has a signature by Bieber.[21] Tamar Antai of MTV Buzzworthy called the scarf "boundsly adorable" and "a total bargain for less loneliness".[21] Another product was a white t-shirt that had the phrase stylized as "1LessL♥nleyGirl" in variations of sky blue colors.[22] In December 2009, Bieber teamed up with 1-800-Flowers for a promotion. The company came out with a "One Less Lonely Girl"-branded bouquet of red "intuition" roses and a Valentine's Day card from Bieber, depicting the singer holding a heart.[23][24] Packages could either have a twenty-four or twelve count stems, and a red, silver or clear vase.[23] The flowers could be set for delivery between January 12-February 12, 2010, before Valentine's Day.[23] The first one thousand customers received a free replica of the scarf in the "One Less Lonely Girl" video.[25] A portion of the proceeds went to Pencils of Promise, a charity that helps build schools in developing areas of the world. Bieber frequently participates in the charity.[23] A contest was also set in place in which a winner would be greeted with their flowers by Bieber himself, or could win the flower bouquet and other Justin Bieber merchandise.[26]

Bieber has performed "One Less Lonely Girl" as an acoustic rendition and with the original musical background. He premiered the song, performing an acoustic rendition when he made a return appearance to his native Canada on the finale of YTV's The Next Star.[27] Bieber performed the song along with his lead single "One Time" on September 26, 2009. He also performed the song acoustically when he appeared on It's On with Alexa Chung on November 19, 2009.[28] When Bieber performs the song with the musical background, he invites one or two girls on stage to be the object of his affection or the "lonely girl" during the performance.[29] Bieber performed the song with the original musical background along with "One Time", and "Favorite Girl" on his U.S. network television debut on The Today Show.[30] He also performed the song with the musical background on The Ellen DeGeneres Show, and during Winter 2009 when he performed at several different Jingle Ball concerts.[29][31] When Bieber performed at Q100's Jingle Ball in Atlanta, Georgia, where Bieber's career is based out of, he invited good friend and former girlfriend, Caitlin Beadles, who had recently recovered from a boating accident, on stage as the girl during the song.[29] Bieber performed the single as his second song during Dick Clark's New Year's Rockin' Eve with Ryan Seacrest, and invited his friend and fellow performer that night, Selena Gomez on stage to act as the lonely girl.[32] The performance onstage fueled further speculation of a relationship between Bieber and Gomez but both claimed they were just friends, as they did before.[33] He sung the song on VH1's Pepsi Super Bowl Fan Jam, along with other performers Rihanna and Timbaland, and on CBS' The Early Show as a part of their Super Bowl programming.[34][35] He performed a medley of "One Less Lonely Girl" and "Never Let You Go", along with "Baby" at BET's SOS: Help for Haiti Telethon.[36] As the telethon was also being broadcast in Haiti, Bieber sung the first verse in French.[36]