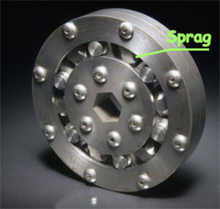 One-way bearing combining sprags and bearing rollers in one race

A sprag clutch is a one-way freewheel clutch. It resembles a roller bearing, but instead of cylindrical rollers, non-revolving asymmetric figure-of-eight shaped sprags are used. When the unit rotates in one direction the rollers slip or free-wheel, but when a torque is applied in the opposite direction, the rollers tilt slightly, producing a wedging action and binding because of friction. The sprags are spring-loaded so that they lock with very little backlash.

A sprag clutch is used in some automatic transmissions as a method of allowing the transmission to smoothly change gears under load. Various models of General Motors' turbo-hydramatic gearbox have used this system.

A sprag clutch is used in most older automatic transmissions and some newer ones for shifts which require the synchronized engagement of one clutch with the disengagement of another. Using an overrunning clutch instead of a hydraulically actuated one makes this synchronization automatic. The sprag clutch simply "lets go" once the reaction force it provides is no longer needed. In a Simpson gearset, common to many automatics, this happens on the 1-2 shift, and reverses on the 2-1 downshift. The 2-3 shift is done by engaging a single clutch, and nothing is released. Some newer electronically controlled transmissions make "clutch to clutch" shifts, without any sprags.

This can also be used exclusively in first gear (transmission shift lever in D, but auto valve body or management selecting 1st) on some autos. That way it will automatically provide forward drive, but will not provide any engine braking. This is done not so much to avoid engine braking per se, but rather to allow a low throttle opening 2-1 downshift as a car decelerates, to avoid a loud (and potentially abrupt) and unnerving jolt as a result of the downshift. On transmissions so equipped, manual selection of 1st gear typically engages an additional band that grips the same section as the one way clutch would engage, and thus allows for engine braking.

A sprag clutch is used in the electric starter motors of modern motorcycle engines to replace the Bendix gear common to automobile starters.

Many modern sport and racing bikes use sprag clutches in the primary drive between the engine and transmission. This prevents the rear wheel from losing traction during rapid downshifts when the engine speed is not matched to road speed. If a sprag clutch is not present, much greater care is required when downshifting because losing rear wheel traction can cause dangerous highside accidents.

On conveyor drives, a sprag clutch is used for indexing and anti-runback.

Overrunning occurs when two or more motors can be used to drive the same machine, including through the same shaft. A typical setup is as follows. The service drive, or prime mover, provides a combination of high speed and high power for normal operation. The secondary drive, or pony drive, can be run at low speed and low power, usually to position the conveyor for maintenance.

The overrunning clutch allows the secondary drive to remain stationary during normal high speed operation of the conveyor drive.

A hoist load brake is used as a secondary brake to prevent industrial hoists from catastrophically dropping their loads in the event of mechanical failure.

Sprag clutches may be oil or grease lubricated. Most sprag clutch manufacturers do not allow the use of lubricants containing extreme pressure additives.