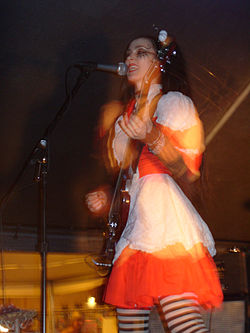 Freeman performing at Rockfest 2009 in Austin, Texas, in typical regalia.

One-Eyed Doll is an eclectic goth punk[1] duo based in Austin, Texas, which was voted the Best Punk Band in 2009,[2] 2010[3] and 2011 at the Austin Music Awards at SXSW[4] along with variously placing in the Top Ten in the categories of Best New Band, Best Metal Band, Best Female Vocalist, Best Guitarist, Best Drummer, etc.[5] With a discography of eight full-length albums under its belt,[6] the band made No. 1 on ReverbNation's local chart[7] and has toured nationally in the summer of 2011 with OTEP/Atavist.[8][9] The leit-motif of the band's lead singer and guitarist, Kimberly Freeman (which has been described as Gwar meets Strawberry Shortcake[10]) is heavily influenced by anime;[11] she performs on a signature Tregan guitar, accompanied by the lone drummer (and producer) Jason "Junior" Sewell, in a highly theatrical style[12] which has been described musically as "... Pixies meets Siouxsie meets Hole"[5] and the "bastard laboratory love child of Dresden Dolls meets White Stripes and Marilyn Manson."[13]

One-Eyed Doll, which was formed in 2008, first gained recognition from their peers when they won their first Best Punk Band at the 2009 SXSW; the award was presented by Exene Cervenka[2] of the first-generation punk band X. That year they also won 2nd place Metal Band, 3rd place Best New Band, 4th place Industrial/Both Band, 7th place Best Acoustic Guitar (Kimberly Freeman), 8th place Female Vocals (Kimberly Freeman), and 10th place Best Record Producer (Jason Rufuss Sewell, for Monster.)[14] One-Eyed Doll broke into the mainstream media, however, with the release of their eighth album (their third commercially released) Break, whereupon Kimberly Freeman was featured in the January/February 2010 Fallen Heroes issue of Revolver in its cover feature The Hottest Chicks in Hard Rock; she also appeared as an awakening zombie on America's Got Talent.[15] She gained more serious recognition upon being featured in a full-page dedicated article in the April 2011 Guts & Glitter issue of Guitar Player[16] magazine as one of the Twenty Most Extraordinary Female Guitarists[17] along with the likes of Joan Jett, Bonnie Raitt, and Nancy Wilson.[18] The band has a fervent fanbase,[19][20] and is known for their mutual support of their fans, some of whom have gotten tattoos of the band's iconography,[21] and for their equally fervent DIY business model.[22][23][24] Amongst its national tours have been performing at several major anime conventions such as DragonCon,[11] and headlining at the 4&20 Blackbird Festival in Weed, California.[25][26]

In an unusual tie-in, Kimberly Freeman is one of several real-life people to appear in the massively multiplayer online role playing game AdventureQuest Worlds (where she is styled as the True Sixth Lord of Chaos);[27][citation needed] the OED song Battle On is prominently featured. She also appears in the AdventureQuest Worlds Anything-Goes Battle On Battle Card Game on two cards,[28][29][30] one of them a berserker enhancement card quite in keeping with her on-stage persona.[31] She is also the voice of Sally in the Doomwood Saga of the same game.

In real life, Kimberly Freeman speaks Mandarin fluently from a stint in China before beginning her music career, and was a volunteer for the Red Cross at Ground Zero after 9-11. Her producer and third drummer (and third "Junior"), Jason Rufuss Sewell, recorded his first record at the age of fifteen and has been producing records continually ever since. He has also run for the California State Senate seat for District 6 in 2002 (as Jason A. Sewell on the Libertarian Party ticket), coming in second with 26% of the vote.[32] Freeman and Sewell have created music for hundreds of commercials, movies, and video games,[1] most prominently for AdventureQuest Worlds.[33]

An hour-and-a-half gonzo documentary of the band's life on the road on tour from Austin to Harlem[34] has been released on YouTube for free by David Bruce Bates, Jr.[35]