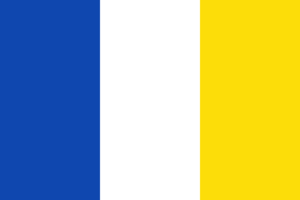 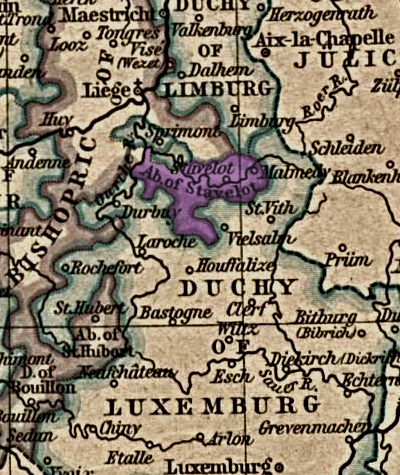 capital = Stavelot
footnotes = * Stavelot to the flagcountry|NLD; to flag|Prussia|1803|name=Prussian
Stavelot is a Walloon located in the Belgian province of Liège. On Stavelot had a total population of 6,671. The total area is 85.07 km² which gives a of 78 inhabitants per km².

The town grew up around the Abbey of Stavelot, founded "ca" , out of what had been a , by the legendary (Saint Remacle). The villa's lands occupied the borderland between the bishoprics of and . The Abbey of Stavelot was secularized and demolished at the time of the : of the church just the west end doorway remains, as a free-standing tower. Two s, one secular, one for the monks survive as the courtyards of the brick-and-stone 17th century domestic ranges, now housing the Museum of the Principality of Stavelot- Malmedy, and museums devoted to the poet , who was a long-term resident, and to the Circuit de Spa-Francorchamps. The foundations of the abbey church are presented as a footprint, with walls and column bases that enable the visitor to visualize the scale of the Romanesque abbey.

Stavelot was the seat of the , a small independent region of the , ruled by the abbots of Stavelot. The principality was dissolved in 1794 during the French Revolution. At the in 1815, Stavelot was added to the , contrary to which was added to the Prussian Rhineland in 1815. In 1830 it became part of (Malmedy would also became a part of Belgium in 1919).

The key building period at the abbey of Stavelot corresponds to the rule of the abbot Poppon, the second founder of the abbey, who revived the cult of St Remaclus and died in 1048; his cult, which began almost immediately, [The "Vita Popponis" which detailed the miracles that occurred in his name specifically asserted that Stavelot might rejoice in having a saint, as Tours rejoiced in its Saint Martin.] focused on his resting place in the crypt. Thietmar was the lay patron who assembled carpenters and stone masons to build the abbey church ["Vita Popponis", ch. ] The church served its dual purpose as a monastic church and as a church of pilgrimage until the French Revolution. Its imposing gatehouse tower was rebuilt in 1534; its ground floor is all that remains, though the abbey church has been excavated and is presented in its plan.

In the mid-12th century the independent prince-abbot of Stavelot-Malmedy supported a group of goldsmiths' and metalworking workshops that produced champlevé enamels, among whom the name of Godefroid de Claire stands out. Abbot (ruled –58) was one of the greatest patrons of the arts in the 12th century; during his rule the of gilded copper and enamels was produced, about 1156, for the Abbey to contain two fragments of the . The binding of the Stavelot Bible, and the remaining fragments from the retable (altar screen) at Stavelot are among the highpoints of medieval art.

The town's , granted in 1819, are parted fess-wise -between the founding bishop, and the wolf, which in Stavelot's founding legend, carried bricks for the building of the Abbey.

At the end of , during the battle of the Bulge, the city was the scene of severe fighting. Moreover, between the 18 and 20 December 1944, soldiers belonging to the German killed more than 100 civilians (including women and very young children) in Stavelot and the surrounding area. For this and other massacres (among others of American prisoners of war) perpetrated during the same period, Peiper and some of his men would eventually have to face the where they were convicted of having committed .

Stavelot is part of the original course of the , the famous venue of the and the Spa 24 Hours endurance race.