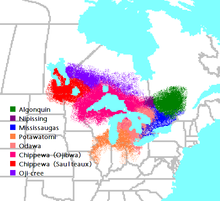 Range of Algonquins around year 1800 in green

Algonquin family in their tent

The Algonquins are aboriginal/First Nations inhabitants of North America who speak the Algonquin language, a divergent dialect of the Ojibwe language, which is part of the Algonquian language family.[1] Culturally and linguistically, they are closely related to the Odawa and Ojibwe, with whom they form the larger Anicinàpe (Anishinaabe) grouping. The Algonquin people call themselves Omàmiwinini (plural: Omàmiwininiwak) or the more generalised name of Anicinàpe.

Though known by several names in the past, the most common term "Algonquin" has been suggested to derive from the Maliseet word elakómkwik (IPA: [ɛlæˈɡomoɡwik]): "they are our relatives/allies".[2][3] The much larger heterogeneous group of Algonquian-speaking peoples, who stretch from Virginia to the Rocky Mountains and north to Hudson Bay, was named after the tribe.

Most Algonquins live in Quebec. The nine Algonquin bands in that province and one in Ontario have a combined population of about 11,000. (Popular usage reflects some confusion on the point. The term "Algonquin" is sometimes used, in the Catholic Encyclopedia, to refer to all Algonquian-speaking societies, although this is not correct.)

Traditionally, the Algonquins were practitioners of Midewiwin (the right path). They believed they were surrounded by many manitòk or spirits in the natural world. French missionaries converted many Algonquins to Catholicism in the 17th and 18th century. Today, many of the people practice traditional Midewiwin or a syncretic merging of Christianity and Midewiwin.

In the earliest oral history, the Algonquins say they migrated from the Atlantic coast. Together with other Anicinàpek, they arrived at the "First Stopping Place" near Montreal. While the other Anicinàpe peoples continued their journey up the St. Lawrence River, the Algonquins settled along the Kitcisìpi (Ottawa River), a long-important highway for commerce, cultural exchange and transportation. A distinct Algonquin identity, though, was not fully realized until after the dividing of the Anicinàpek at the "Third Stopping Place". Scholars have used the oral histories, archeology, and linguistics to estimate this took place about 2000 years ago, near present-day Detroit.

After contact with the Europeans, especially French and Dutch, the Algonquin nations became active in the fur trade. This led them to fight against the powerful Iroquois, whose confederacy was based in present-day New York. In 1570, the Algonquins formed an alliance with the Montagnais to the east, whose territory extended to the ocean. 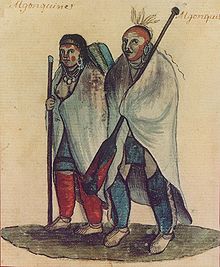 Algonquin couple, 18th c. watercolor. The first Algonquian encountered by the French were the Kitcisìpiriniwak ("Ottawa River Men"; singular: Kitcisìpirini), whose village was located on an island in the Ottawa River; the French called this group La Nation de l'Isle.

The Algonquin first met Europeans when Samuel de Champlain came upon a party led by the Kitcisìpirini Chief Tessouat at Tadoussac, in eastern present-day Quebec, in the summer of 1603. They were celebrating a recent victory over the Iroquois with the allied Montagnais and Etechemins (Malecite). Champlain did not understand that the Algonquins were socially united by a strong totem/clan system rather than the European-styled political concept of nationhood. The several Algonquin bands each had its own chief. Within each band, the chief depended on political approval from each of the band's clan leaders. Champlain needed to cultivate relationships with numerous chiefs and clan leaders. From 1603, some of the Algonquin allied with the French under Champlain.

Champlain made his first exploration of the Ottawa River during May 1613 and reached the fortified Kitcisìpirini village at Morrison Island. Unlike the other Algonquin communities, the Kitcisìpiriniwak did not change location with the seasons. They had chosen a strategic point astride the trade route between the Great Lakes and the St. Lawrence River. They prospered through the collection of beaver pelts from native traders passing through their territory. They also were proud of their corn fields.

At first, the French used the term "Algonquin" only for a second group, the Wàwàckeciriniwak. However, by 1615, they applied the name to all of the Algonquin bands living along the Ottawa River. Because of keen interest by tribes to gain control of the lower Ottawa River, the Kitcisìpiriniwak and the Wàwàckeciriniwak came under fierce opposition. These two large groups allied together, under the leadership of Sachem Charles Parcharini, to maintain the Omàmiwinini identity and territory.

The Iroquois Confederacy drove the Algonquins from their lands. They were aided by having been traded arms by the Dutch, and later by the English. The Iroquois defeated the French and Algonquins.

In 1632, after Sir David Kirke's occupation of New France demonstrated French colonial vulnerability, the French began to trade muskets to the Algonquins and their allies. French Jesuits began to seek Algonquin conversions to Roman Catholicism, to tie them more closely to France. Such efforts divided the traditionalists and converts in the bands.

Through all of these years, the Iroquois never attacked the Kitcisìpirinik fortress. But, in 1642, they made a surprise winter raid, attacking the Algonquin while most of the warriors were absent, and causing severe casualties. On March 6, 1647 (Ash Wednesday), a large Mohawk war party attacked the Kitcisìpiriniwak living near Trois-Rivières and almost exterminated them. The Kitcisìpiriniwak were still at Morrison Island in 1650 and inspired respect with their 400 warriors. When the French retreated from the Huron country that year, Tessouat is reported to have had the superior of the Jesuit mission suspended by his armpits because he refused to offer him the customary presents for being allowed to travel through Algonquin territory.

Some joined the mission at Sillery, where they were mostly destroyed by an infectious disease epidemic by 1676. Encouraged by the French, others remained at Trois-Rivières. Their settlement at nearby Pointe-du-Lac continued until about 1830. That year the last 14 families, numbering about 50, moved to Kanesatake near Oka. (The families who stayed in Trois Rivieres can be found in the Algonquin census of Trois Rivieres in the mid-19th century).

The Sulpician Mission of the Mountain was founded at Montreal in 1677, and some Algonquins settled there together with Iroquois converts. The mostly Mohawk community became known as Kahnawake. But many Algonquin maintained their attachment to the traditional territory and fur trading. Those who agreed to move to established reserves or joined other historical bands were federally "recognized". Many others who did not re-locate were later called "stragglers" in the Ottawa and Pontiac counties.

Though the Algonquins were defeated, they were never destroyed. The Algonquin culture lives on among bands and nations.

Starting in 1721, many Christian Algonquins began to settle for the summer at Kahnesatake, near Oka. The Mohawk Nation was then considered one of the Seven Nations of Canada. Algonquin warriors continued to fight in alliance with France until the British conquest of Quebec in 1760 during the Seven Years War. After the British took over colonial rule of Canada, their officials sought to make allies of the First Nations. Fighting on behalf of the British Crown, the Algonquins took part in the Barry St Leger campaign during the American Revolutionary War.

Loyalist settlers began encroaching on Algonquin lands shortly after the Revolution. Later in the 19th century, the lumber industry began to move up the Ottawa valley, and some Algonquins were relegated to a string of small reserves.

Although the historical Algonquin society was largely hunting- and fishing-based, some Algonquin practiced agriculture and cultivated corn, beans, and squash, the famous "Three Sisters" of |indigenous horticulture. Being primarily a hunting nation, the people emphasized mobility. They used materials that were light and easy to transport. Canoes were made of birch bark, sewed with spruce roots and rendered waterproof by the application of heated spruce resin and bear grease. During winter, toboggans were used to transport material, and people used snowshoes to get around. The women used tikinàgan (cradleboards) to carry their babies. It was built with wood and covered with an envelope made of leather or material. The baby was standing up with his feet resting on a small board. The mother would then put the tikinàgan on her back. This allowed the infant to look around and observe his surroundings. The child was kept close to the mother but also had much stimulation.

Algonquian-speaking people also practiced agriculture, particularly south of the Great Lakes, where the climate allows for a longer growing season. Notable indigenous crops historically farmed by Algonquins are the sunflower and tobacco. Even among groups who mainly hunted, agricultural products were an important source of food. They obtained what was needed by trading with or raiding societies that practiced more agriculture.

Archaeological sites on Morrison Island near Pembroke, within the territory of the later Kitcisìpiriniwak, reveal a 1,000-year-old culture that manufactured copper tools and weapons. Copper ore was extracted north of Lake Superior and distributed down to today's northern New York. Local pottery artifacts from this period show widespread similarities that indicate the continuing use of the river for cultural exchange throughout the Canadian Shield and beyond.

Some centuries later, the Algonquin tribe moved in and inhabited the islands and shores along the Ottawa. By the 17th century the first Europeans found them well-established as a hunter-gatherer society in control of the river. The Kitcisìpiriniwak showed entrepreneurial spirit. On Morrison Island, at the location where 5,000-year-old copper artifacts were discovered, the Kitcisìpirini band levied a toll on canoe flotillas descending the river.

In 1981, members of the Algonquin tribe successfully blockaded a commercial rice-harvesting venture which had been given federal governmental permission to harvest wild rice. The tribe had traditionally gathered this grain by hand for centuries.[6] Hundreds of people blockaded roads, and despite police helicopters, paddy wagons, and "a lot of hostility and pushing and shoving," according to Harold Perry, honorary chief of the Ardoch Algonquins, the tribe and its supporters held their ground for 27 days—long enough for the federal government to reverse its decision and revoke the commercial permit.

In recent years, tensions with the lumber industry have flared up again among Algonkin communities, in response to the practice of clear-cutting. In Ontario, an ongoing Algonkin land claim has, since 1983, called into dispute much of the southeastern part of the province, stretching from near North Bay to near Hawkesbury and including Ottawa, Pembroke, and most of Algonquin Provincial Park.[7]

In 2000, Algonquins from Timiskaming First Nation played a significant part in the local popular opposition to the plan to convert Adams Mine into a garbage dump.

Members of the Algonquin tribe began a peaceful blockade of a uranium mining operation on their sacred lands north of Kingston, Ontario on June 29, 2007.[8] Oakville-based Frontenac Ventures, the prospecting company, sought a court order to force the protesters from the area. A court injunction was obtained on August 27, 2007, and a series of arrests followed, including that of the Ardoch Algonquin First Nation co-Chiefs Robert Lovelace and Paula Sherman. Chief Lovelace served a six-month sentence for contempt of court for violating the injunction, which required all protesters to remain at least 200 metres from the mining site. Chief Sherman also received a six-month sentence, but it was suspended as she agreed to respect the injunction. Tens of thousands of dollars in fines were levied against them.[9]

In addition to the charges of contempt, Frontenac Ventures is suing the Algonquins for $77 million in civil damages. On March 18, 2008, contempt charges were dropped "without costs" against three non-native activists: Frank Morrison and Christian Peacemakers David Milne and Reverend John Hudson. They had been charged with violating the same injunction as Lovelace and Sherman, but Frontenac Ventures declined to prosecute. During the same proceedings, however, warrants were obtained for the arrest of five other non-native activists who allegedly violated the injuncton.[10]

At the time of their first meeting with the French in 1603, the various Algonquin bands probably had a combined population somewhere in the neighborhood of 6000. The British estimate in 1768 was 1500. As of 2000, there are close to 8000 Algonquins in Canada, organized into ten separate First Nations: nine in Quebec and one in Ontario.

Algonquian Nations documented as early as 1630:

These population figures are from Canada's Department of Indian and Northern Affairs.

The Nipissing First Nation of North Bay, Ontario is also sometimes considered to belong to the Algonkin group of Anishinaabeg.