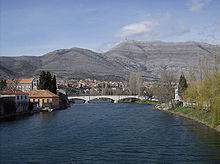 Trebišnjica River is a river in Bosnia and Herzegovina. It used to be a sinking river, 96,5 km long above the ground. With a total length of 187 km above and under the ground, it was one of the longest sinking rivers in the world.

As it flows in the highly karst (limestone) area, the Trebišnjica actually represents a very complex system of the above and underground streams. It originates in Bosnia and Herzegovina from two streams from the Lebršnik and Čemerno mountains:

River shortly re-appears in the Fatničko Polje (Field of Fatnica) under the name of Fatnička reka (River of Fatnica), only to sink again after a short flow above the ground.

After the total underground flow of some 30 km, the waters of the sinking Fatnička reka re-appear as a series of very powerful cave springs near the town of Bileća, which are joined into one river, the Trebišnjica, the most important river in the eastern Hercegovina. The river flows to the south, through the depression of Miruša. On the southernmost part of the depression, the river is dammed at the Gornje Grnčarevo village and completely flooded upstream by the artificial Lake Bileća. Almost complete western bank of the lake belongs to the Montenegro.

The Trebišnjica turns west between the villages of Donje Grnčarevo and Lastva into the Trebinjsko polje (Field of Trebinje), being dammed once again at the village of Gorica, with a small reservoir. The river continues to the west following the southern slopes of Bjelašnica mountain, through the town of Trebinje and villages of Dražin Do, Tvrdoš, Gornja Kočela and Donja Kočela, and enters the largest karst field in the Balkans, Popovo Polje (Field of the priest).

In Popovo Polje, the Trebišnjica already used to sink (see Regulation below), right after the Trebinje. In the field, the river turns northwest, next to the villages of Staro Slano, Đedići, Dobromani, Žarkovo, Tilje, Sedlari, Grmljani and Zavala, near the Vjetrenica cave, the largest in Bosnia and Herzegovina. The river then turns north, makes a big curve between the villages of Dvrsnica, Orašje, Čavaš and Turkovići and in the lower Popovo Polje, near the Croatian border, sinks into the several big sinking holes (most notably, the Doljašnica and Ponikva holes).

The waters of Trebišnjica from the Popovo Polje, re-appear as three separate outflows:

For a river that flows in geologically unstable terrain (karst) and with such an interrupted flow, the Trebišnjica amounts enormous potential for hydroelectricity production. As a result, regulatory works on the Trebišnjica were arguably the most massive ones in the former Yugoslavia.