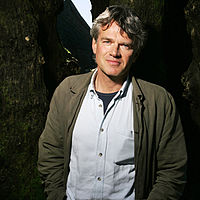 Olivier Weber is an award-winning french writer, novelist and reporter at large. War correspondent for twenty-five years, specially in Afghanistan, Africa, Middle-East and Iraq. Assistant professor at the Institut d'études politiques de Paris, president of the Prize Joseph Kessel, he is today ambassador of France at large. His novels, travels writing books and essays have been translated in a dozen of languages.

Olivier Weber, born in 1958 in Montluçon, France, is a writer, novelist and reporter at large. He has studied economics and anthropology at the University of San Francisco, University of Paris Sorbonne, University of Nice (Ph.D.) and at the National Institute of Oriental Languages and Civilizations (Institut National des Langues et Civilisations Orientales, INALCO). He won the Albert Londres Prize and Joseph Kessel Prize for his reports on wars and books.

Assistant professor at the Institut d'études politiques de Paris (Sciences-Po), he began his career of journalist in California. Then he was sent in Africa for the french daily Liberation, to cover several wars and conflicts. He joined the french weekly Le Point as a journalist and later was appointed foreign correspondent. As a war correspondent, he has traveled with a dozen of guerillas and armed movements. He has covered around twenty wars and conflicts, including wars and armed conflicts in Afghanistan, Iraq, Burma, Kurdistan, Chechnya, Israel, Palestinian Territories, Chad, Pakistan, Kashmir, Algeria, Iran, Armenia, Russia, Kosovo, Sri Lanka, Western Sahara, East Timor, Erythrea. He then continues its activities as a writer, whose style is sometimes compared to that of Conrad and Cendrars[1][2][3]. Since then, he travels the world, from United States to China, from Africa to the East which became his passion[4][5]. He brought from these illegal trips and stays several stories, surveys and novels, including Dragon Hunters: Opiomistan trip, and The White Death on the world of drug dealers.

Committed writer[6], Olivier Weber has written a lot of lost causes and indigenous people. He has defended in particular the resistance of South Sudan and has denouced the slavery of sudanese children. He participated at the operations of saving the boat people, in the China Sea, with volunteers of the international NGO Doctors of the World (Médecins du Monde). He has also defended the afghan mujahideen during the war against soviet army and then against the pro-commuunist regime of Najibullah and had traveled several times with the rebels and Commander Massoud. After criticizing the regime of talibans, he has been expelled from Afghanistan by the militians of Mollah Umar. His denunciation of human trafficking by the Tamil Tigers of Sri Lanka and disposal of their prisoners, after several trips to the bush,[7] brought him new threats. The plane was to take it from Jaffna to Colombo was deliberately shot down by fighters of the armed movement. Following an expedition with one of the Burmese guerrillas, he met secretly in Rangoon the opposition leader Aung San Suu Kyi[8].

In August 2001, he traveled to Central Asia to lauch a humanitarian mission in the Panjshir Valley and bring to Ahmed Shah Massoud proofs of his book The Afghan Hawk. A few days later, September 9, 2001, two days before the attacks of the World Trade Center, the Lion of Panjshir was assassinated by two terrorists of Al Qaeda. Olivier Weber will attend his funeral, when the Taliban launched a major offensive. His testimony and his denunciation of the Taliban regime and the rise of Al Qaeda in Afghanistan, Pakistan and Central Asia have earned him death threats[9] · [10]. He has published on Central Asia and the Silk Road several books: The Great Feast of the East, The Afghan Hawk: a journey to the land of the Taliban, Memory murdered, Road of drugs, The White Death [11].

He has also denounced the impunity of the Khmer Rouge in the mountains of western Cambodia, after meeting in the underground movement leaders Ieng Sary and Khieu Samphan, both former deputies of Pol Pot[12] · [13].

In May 2009, he gives the award Joseph Kessel Prize to the writer and member of the French Academy Erik Orsenna for his fight for water and his latest book[14].

The film of his book Cursed for Gold (J'aurais de l'or), travelogue on human trafficking in the Amazon and other traffickings related to deforestation and the massacre of Native Americans, was the subject of a remarkable press and has been described as a witness in the vein of Darwin's Nightmare and Blood diamond,.[15] · [16] · [17].

His essay on Joseph Kessel, Kessel, The Eternal nomad, highlights the commitment of the reporter and member of the French Academy.[18]

He is a member of the Albert Londres Award's jury. Author and writer of documentaries, he is also editor of the series "Writers travelers."

Olivier Weber has been nominated in 2008 ambassador of France at large, in charge of human trafficking and human rights. He has done several dozens of missions for this task in Asia, Africa, Central America, Middle East, and advocates at the tribune of the United Nations mainly on human trafficking, child soldiers, fight against drugs, civil society and human rights[19] · [20]. He has received several awards and prizes of literature and journalism, among them the prestigious Albert Londres Prize, considered as the french Pulitzer prize, for his articles and reports. He is a selection committee member for literature awards and member of the Société des Explorateurs Français (Society of the French Explorers).

Literature and Journalism Prizes and Awards

Olivier Weber is the author, director and screenwriter of several films for television and theater, in particular on travels and on writers.