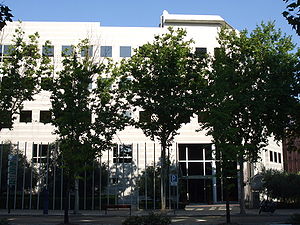 The International Olive Council (IOC) is an intergovernmental organization based in Madrid, Spain, with 23 member states. It promotes olive oil around the world by tracking production, defining quality standards, and monitoring authenticity. More than 85% of the world's olives are grown in IOC member nations.[1] The United States is not a member of the IOC, and the US Department of Agriculture does not legally recognize its classifications (such as extra-virgin olive oil). On October 25, 2011 the United States adopted new olive oil standards, a revision of those that have been in place since 1948, which affect importers and domestic growers and producers by ensuring conformity with the benchmarks commonly accepted in the U.S. and abroad.[2]

The IOC officially governs 95% of international production and holds great influence over the rest. IOC terminology is precise, but it can lead to confusion between the words that describe production and the words used on retail labels. Olive oil is classified by how it was produced, by its chemistry, and by its flavor. All production begins by transforming the olive fruit into olive paste. This paste is then malaxed to allow the microscopic oil droplets to concentrate. The oil is extracted by means of pressure (traditional method) or centrifugation (modern method). After extraction the remnant solid substance, called pomace, still contains a small quantity of oil.

The EU regulates the use of different protected designation of origin labels for olive oils.

US Customs regulations on "country of origin" state that if a non-origin nation is shown on the label, then the real origin must be shown on the same side of the label and in comparable size letters so as not to mislead the consumer.[3][4] Yet most major US brands continue to put “imported from Italy” on the front label in large letters and other origins on the back in very small print.[5] These products are a mixture of olive oil from more than one nation and it is not clear what percentage of the olive oil is really of Italian origin. This practice makes it difficult for high quality, lower cost producers outside of Italy to enter the US market, and for genuine Italian producers to compete.

With Italian extra-virgin olive oil in high demand with concomitant high prices, adulterated olive oil has become the biggest source of agricultural fraud problems in the European Union.[6] Some oil labeled "extra-virgin" is diluted with cheaper olive oils or other vegetable oils. In some cases, lampante, or "lamp oil," which is made from spoiled olives fallen from trees, is used, even though it can't legally be sold as food. One fraud ring is accused of coloring low-grade soy oil and canola oil with industrial chlorophyll, and flavoring it with beta-carotene.[6]

In the United States, the Food and Drug Administration (FDA) doesn't routinely test imported olive oil for adulteration, and some products are difficult to test.

An article by Tom Mueller in the August 13, 2007 issue of The New Yorker states that major Italian shippers routinely adulterate olive oil and that only about 40% of olive oil sold as "extra virgin" actually meets the specification.[7] In some cases, colza oil with added color and flavor has been labeled and sold as olive oil.[8] This extensive fraud prompted the Italian government to mandate a new labeling law in 2007 for companies selling olive oil, under which every bottle of Italian olive oil would have to declare the farm and press on which it was produced, as well as display a precise breakdown of the oils used, for blended oils.[9] In February 2008, however, EU officials took issue with the new law, stating that under EU rules such labeling should be voluntary rather than compulsory.[10] Under EU rules, olive oil may be sold as Italian even if it only contains a small amount of Italian oil.[9]

In 1993, the FDA ordered a recall of Rubino U.S.A. Inc., (Cincinnati, Ohio) olive oils which were nothing more than canola oil.[11]

In 2007, American supermarket chain ShopRite (United States) recalled certain olive oils after it was discovered that they were counterfeit.

In March 2008, 400 Italian police officers conducted "Operation Golden Oil," arresting 23 people and confiscating 85 farms after an investigation revealed a large-scale scheme to relabel oils from other Mediterranean nations as Italian.[13] In April 2008, another operation impounded seven olive oil plants and arrested 40 people in nine provinces of northern and southern Italy for adding chlorophyll to sunflower and soybean oil and selling it as extra virgin olive oil, both in Italy and abroad. 25,000 liters of the fake oil were seized and prevented from being exported.[14]

On March 15th, 2011, the Florence, Italy prosecutor’s office, working in conjunction with the forestry department, indicted two managers and an officer of Carapelli, one of the brands of the Spanish company Grupo SOS (which recently changed its name to Deoleo). The charges involved falsified documents and food fraud. Carapelli lawyer Neri Pinucci said the company was not worreid about the charges and that “the case is based on an irregularity in the documents.” [16]

Adulterated oil is usually no more serious than passing off inferior, but safe, product as superior olive oil, but there are no guarantees. Almost 700 people died, it is believed, as a consequence of consuming rapeseed (canola) oil adulterated with aniline intended for use as an industrial lubricant, but sold in 1981 as olive oil in Spain (see toxic oil syndrome).[17]

The detection of olive oil adulteration is often complicated with no single test that can accomplish the task. A battery of tests is employed to determine Olive oil authenticity and identity of the adulterant. Included in this testing regime is the determination of free acidity, peroxide value, UV extinction, fatty acid composition, sterol composition, triglyceride composition, wax content, steroidal hydrocarbons, and the Bellier test.[4] Test results are measured against the International Olive Oil Council trade standard to identify abnormalities. Each test provides key information which allows a decision to be made with respect to the grade of Olive oil and the identity of any adulterants.

For example, a test published in 1887 described the detection of olive oil adulterated with mineral oil by a simple titration of the carboxylic acid moieties present in natural vegetable oils. The procedure involved boiling 10 milliliters of olive oil with 40 milliliters of approximately 1 molar potassium hydroxide in 95% ethanol, adding water to 100 grams to dissolve the saponified lipids, and titrating against a normal sulfuric acid solution using phenolphthalein as a pH indicator dye. The base stock solution was titrated to neutralize an equal quantity of the acid, so without the presence of vegetable oil it would require 40 milliliters of acid to cause a color change, but in the pure oils tested (almond, benne, cottonseed, cod liver oil, linseed oil, and olive oil, only 6 milliliters were required. In accordance with this, olive oil adulterated with 10% mineral oil required 8 milliliters, and with 20% 11 milliliters. The adulterated oil tested in 1887 required 14 to 17 milliliters to neutralize, so it might have been 30-40% mineral oil.[18]

All polyunsaturated oil undergoes a process of rancidity once exposed to oxygen in the air. Monounsaturated and saturated fats will not get rancid. In the colder environment of a refrigerator, this process continues, but at a slower rate. As such, it has become common to refrigerate olive oils. When genuine olive oil is refrigerated, it should become more viscous, that is thicker if not nearly solid. Blended olive oils and non-olive oils posing as olive oil will not solidify when refrigerated, and so the refrigeration test is one (although not conclusive) way to test for purity.

Pure olive oil should burn in an oil lamp. In December 2007, as certain Jews attempted to use what they thought was pure olive oil to light the menorah, they discovered it would not burn. New York Assemblyman Dov Hikind (D-Brooklyn) followed up by purchasing olive oil products and sending them to New York State’s Department of Agriculture and Markets, Division of Kosher Law Enforcement for testing. “The product I purchased last year, was marketed as 100% olive oil, but it wouldn’t burn. I lit the menorah, came back and it couldn’t sustain the flame,” said Hikind. “It seemed clear that the product was not pure olive oil but was adulterated. Consumers who pay for pure olive oil because they want to do the hiddur mitzvah should not be misled.”[5] The ignition test however, like the refrigerator test, is not conclusive.