Print of the walled city of Poznań and its surroundings, Civitates Orbis Terrarum, 1618

Poznań Old Town is a central neighbourhood of the city of Poznań in western Poland, covering the area of the walled medieval city of Poznań. It is called Stare Miasto in Polish (although that name may also refer to the wider administrative district of Stare Miasto, which extends to most of the city centre and northern parts of the city).

The original settlement of Poznań was on the river island of Ostrów Tumski, and dates from at least the 9th century. The Old Town neighbourhood, however, corresponds to the city on the left bank of the Warta, to the west of Ostrów Tumski, which received its charter in 1253 (work on the Royal Castle, which would be at the western side of the ring of walls, began several years earlier). The city walls were taken down when the city expanded in the early 19th century, but the street layout of the Old Town still corresponds closely to that of the former walled city, with a grid of narrow streets. Surviving fragments of the walls, some of which have been further reconstructed, can be seen on ul. Stawna and ul. Masztalarska in the north, and next to Chopin Park in the south.

The Old Town is centred on Stary Rynek, the Old Market Square. The historic Town Hall (Ratusz) stands in the middle of that square. At the western end of the Old Town is the hill (Góra Przemysła) on which the castle stood.

Bird's-eye view of the square, from the south

The Old Market Square (Stary Rynek) is the large square on which the Old Town neighbourhood is centred. The sides of the square measure approximately 140 metres (460 ft). There is a group of buildings in the central part of the square, chief of which is the Old Town Hall (Ratusz). On each side of the square are tall rows of former tenement houses (kamienice), many of which are now used as restaurants, cafés and pubs (often with outdoor tables on the square itself). The square was originally laid out in around 1253, with each side divided into 16 equal plots, and many changes to architectural layout and style were made over the centuries. Major changes were made from 1550 onwards by Giovanni Battista di Quadro, who reconstructed the Town Hall and several other buildings in Renaissance style (severe damage had been done to the buildings by a fire of 1536). Most of the buildings in the square were reconstructed following heavy damage in the Battle of Poznań (1945).

The central group of buildings includes:

Notable houses among those around the edge of the square include:

Other features of the square are a punishment post ("pranger", Polish pręgierz) and a fountain depicting Proserpina, on the eastern side in front of the Town Hall; a statue of St. John Nepomucene; and fountains depicting the gods Apollo, Neptune and Mars. Within the central group of buildings is a water fountain depicting a Bamber woman (Bamberka).

Streets in the Old Town

Remains of the Royal Castle 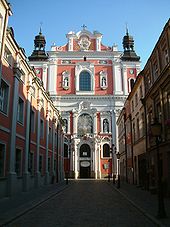 View of the Fara church from ul. Świętosławska

The following is a list of present-day names of streets within the area of the former walled city (ul. stands for ulica, meaning "street").

Streets to the north of the market square:

Streets to the east of the market square:

Streets to the south of the market square:

(For ul. Klasztorna, which extends as far as Gołębia, see above.)

Streets to the west of the market square: