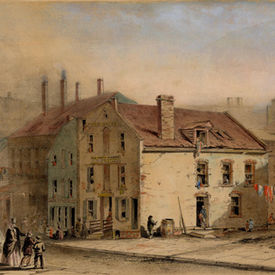 The Old Brewery was the name given to Coulthard's Brewery built in 1792 in lower central Manhattan on land that was then on the outskirts of New York City after its conversion to a tenement following the Panic of 1837.

The brewery was built by Isaac Coulthard[1] southeast of a body of freshwater known as the Collect Pond. After a century of being gradually polluted by industries located on its shores, the Collect Pond was filled in, the project being completed around 1811-1812.

Afterwards, existing streets were extended and new streets laid out on the reclaimed land. Immediately in front of the brewery passed Cross Street in a northeast to southwest direction. Orange Street intersected Cross just north of the brewery. From this intersection, Anthony Street originated and ran northwest, creating a plot of land which ended in a point. This became the infamous Five Points intersection. To the west of this point ran a short street named Little Water Street, which created a triangular plot known as Paradise Park (also known as Paradise Square); the Brewery was across the street from Paradise Park on the south side of Cross Street.

After the financial crisis known as the Panic of 1837, Coulthard's Brewery was converted into residential use and became known as "The Old Brewery". Five Points became a slum within a decade after the filling-in of the Collect Pond, and the Old Brewery became a lawless, overcrowded, filthy and disease-ridden building.

The Old Brewery was purchased in 1852 by the Methodist Ladies of the Mission; it was demolished in December 1853 and a new building called the New Mission House at the Five Points was erected.[2][3]