The Okinawa trough in context of back-arc basins of the world.

The Okinawa Trough (沖縄トラフ, Okinawa Torafu?) is a seabed feature of the East China Sea. It is an active, initial back-arc rifting basin which has formed behind the Ryukyu arc-trench system in the West Pacific. It developed where the Philippine Sea Plate is subducting under the Eurasia Plate.[1]

It is a back-arc basin formed by extension within the continental lithosphere behind the far deeper Ryukyu Trench-arc system.[2] It has a large section more than 3,300 feet (1,000 metres) deep and a maximum depth of 8,912 feet (2,716 metres).

The Okinawa Trough still in an early stage of evolving from arc type to back-arc activity. 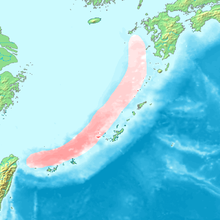 The existence of the Okinawa Trough complicates descriptive issues in the East China Sea.[3] According to Professor Ji Guoxing of the Asia-Pacific Department at Shanghai Institute for International Studies,