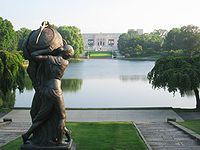 Wade Lagoon in University Circle, home to the Case Medical Center and neighboring Cleveland Clinic, which is set to begin human clinical trials of their breast cancer vaccine in 2011.[1] Netherlands-based Philips Healthcare is currently constructing a medical imaging research and development center in the neighborhood, referred to as the Cleveland Health-Tech Corridor.[1]

The Ohio bioscience sector strength was ranked #4 among USA states in 2008 by Business Facilities magazine.[2]

As of 2008, there were over 1,100 biotech related firms operating in the state,[3] employing 1.4 million residents overall in direct or indirect related fields, including healthcare, with $2.5 billion in investment in 2007, making it an international leader.[4][5] Ohio had three city-regions in the top 30 biotech locations in the country, with Cleveland-Akron ranked #20, Columbus #22, and Cincinnati #28.

The overall economic impact of the bioscience industry in Ohio, including healthcare, amounted to $148.2 billion in 2007, representing 15.7% of Ohio's economic output.[5] Half of the biotech industry is located in northeast Ohio, with 574 firms, while central and southern Ohio are home to around 200 each.[6][7] 635 companies are FDA-certified to manufacture medical devices.[6] Biotech research and development employs directly 12,415 residents, while agricultural bioscience contributed the largest economic impact, at $10.7 billion. Medical device manufacturers employ 9,757 residents.[6]

Major biotech incubators include BioEnterprise in Cleveland, BIOSTART in Cincinnati, TechColumbus, and the Innovation Center in Athens.[11]

In October 2010, Austen BioInnovation Institute in Akron was cleared to begin a renovation project for their new headquarters, projected to produce 2400 new employment positions in the next decade.[12]

Biopharmaceutical companies in Ohio employ 91,750 people in Ohio, with 15,992 directly related jobs, and 75,758 indirectly related positions.[13] In 2006, wages from the sector totaled $1.2 billion, with an economic output of $14.9 billion.[13] 15.8% of clinical trials for new medicines focused on important conditions were conducted in the state in 2008, while companies invested $688 million in research and development.

In June 2010, the state's biotechnology development organization, BioOhio, announced a partnership with the Beijing Pharma and Biotech Center to develop business interests in the state and in China.[14]

Ohio is home to pharmacy chains including Revco in Twinsburg and Discount Drug Mart in Medina, and previously Phar-Mor, which was headquartered in Youngstown.

In 1986, scientists from the Case Western University filed patents related to mesenchymal stem cells, creating the foundation internationally for this sector in celluar therapeutics. The first clinical trials in the United States involving mesenchymal stem cells occurred between 1996-2000 at the University Hospitals of Cleveland, while the hospital was also responsible for the first adult umbilical cord transplant in 1997, and the first adult stem-cell clinical trials in the country in 2003.[15][16]

Major regenerative medicine firms located in Cleveland include Osiris Therapeutics, started in 1994, Juventas Therapeutics, which has plans for their first clinical trial in 2010 and has raised $9.1 million in venture capital and grants, Cell Targeting Inc., which has raised $1 million in grants,[16] Invenio Therapeutics Inc., which specializes in leukemia treatments,[16] and Athersys Inc., which has developed the product Multistem, conducted 2 clinical trials, and raised $180 million in venture capital and grants.[16] Other firms include Proxy Biomedical, LucCell, Inc., and the Cleveland Cord Blood Center.

An up-and-coming firm, Arteriocyte Inc., has completed one clinical trial and raised $43 million in venture capital and grants[16] while being named as the top biotech startup in 2010 by the Ohio Venture Association.[17] The same year the company announced completion of an R&D project funded by the U.S. Department of Defense through DARPA for the development of artificial blood to be used for combat situations.[18]

Firms and institutions around the state include Center for Tissue Regeneration and Engineering at Dayton, Hi-Genomics in Toledo, BioDontos in Dublin, The Research Institute at Nationwide Children's Hospital in Columbus, SecuraCell in Canton, Stembanc, Inc. in Chardon, and Ethicord in Strongsville.