History of the Ohio State University

History of the Ohio State University

For information about the history of the football team, see History of Ohio State Buckeyes football.

The Ohio State University was founded in 1870 as a land-grant university in accordance with the Morrill Act of 1862 under the name of Ohio Agricultural and Mechanical College. Initially, it was thought that one of Ohio's two existing public universities (Ohio University and Miami University) would be designated as the land-grant institution, and each engaged in a vigorous competition to win over the state legislature. At the strong urging of Governor Rutherford B. Hayes, however, it was ultimately decided to establish a new university to be located near the legislature in Columbus. Hayes' role in founding the university is recognized in Hayes Hall (named after Rutherford, not Woody), the oldest building still standing on the campus.[1] Hayes later noted that the founding of Ohio State was one his two greatest achievements—the other being Ohio's ratification of the Fifteenth Amendment.[1][2]

The school was originally situated within a farming community located on the northern edge of Columbus, and was intended to matriculate students of various agricultural and mechanical disciplines. From its inception, a debate was waged between those in favor of broadening the university's focus to encompass the liberal arts and sciences and those who favored a more limited focus. Governor Hayes viewed the selection of the university's location as key to keeping the university free of excess influence by the state's agricultural interests. As such, he worked strongly behind the scenes to ensure that the campus would be located in the city of Columbus rather than the more agriculturally oriented towns of Springfield or Urbana. The campus' location near the state capital combined with Hayes' plan of an expanded board of trustees based upon one member from each of the state's congressional districts ensured that his vision for the new university's curriculum would be put into place. Subsequently, the new board of trustees voted on the spectrum of disciplines to be offered. The ("broad-gauge") faction was led by university trustee Joseph Sullivant. When the votes were completed, it had been decided to offer seven fields of study: agriculture, ancient languages, chemistry, geology, mathematics, modern languages, and physics. Only the ancient languages curriculum came down to a close vote, passing by a margin of 8–7. Later that year, the university welcomed its first class of twenty-four students, including three women. In 1878, and in light of its expanded focus, the college permanently changed its name to the now-familiar "The Ohio State University."

Two factors in Ohio State's formative years would hinder the university's immediate development: hostility from the state's agricultural interests and competition for resources from Miami University and Ohio University. The first arose from the curriculum debate. Fueled by the agriculture interests and the Springfield business community that supplied them, the attitude of Ohio farmers towards the university had turned from one of indifference to one of outright hostility. By 1880, this hostility had begun to make its presence felt in the state legislature. The second hindrance came in the form of competition for state allocations from Ohio's two older public institutions. At the time of Ohio State's creation, these institutions had been derided by then Governor Hayes as borderline sectarian colleges that, in over sixty years of history, had failed to provide Ohio with a real state university. It was this view that was fundamental in the decision to found a new university as recipient for the Morrill Act funds, making Ohio unique among Great Lakes states in founding a new university for this purpose, as well as considerably strengthening the hand of those who advocated a broad based curriculum. However, the founding of this new university combined with their own precarious financial positions (Miami would close for a dozen years due to a lack of enrollment) had awakened the older institutions to compete vigorously for the attention of the state legislature. The first of these issues would be resolved by the end of the decade. Resolution of the second would not occur until 1906. Even then, the inherent tension of agricultural interests within the larger context of a comprehensive research university and the competition among state universities in a decentralized higher education system would, to varying degrees, remain permanent issues with which Ohio State would be forced to contend.

Of fundamental importance in this period was the role of former President Rutherford B. Hayes who, a decade earlier, had lobbied strenuously as Governor for the university's founding. Upon returning to Ohio in 1881, the former President spent the next decade using his considerable political influence to lobby for the university's interests. In 1887 he formally joined the university's board of trustees where, until his death in early 1893, he essentially acted as the university's de facto president. By 1891, Ohio State had grown to a degree that Governor James E. Campbell recommended a permanent levy on the tax duplicate to support its continued growth. The significant role that the fledgling university had begun to play within the state, as well as the peace that Hayes had brokered with the state's agricultural interests, was underscored by the fact that the proposal passed without opposition despite the insistence of Ohio State's board of trustees that neither Miami nor Ohio universities be included in the bill.[3] 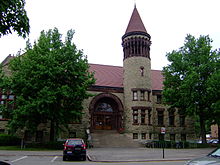 Ohio State began accepting graduate students in the 1880s, with the university awarding its first master's and doctoral degrees in 1886 and 1890 respectively. 1891 saw the founding of Ohio State's law school.

In 1906, Ohio State President William Oxley Thompson along with the university's supporters in the state legislature put forth the Lybarger Bill with the aim of shifting virtually all higher education support to the continued development of Ohio State while funding only the "normal school" functions of Miami and Ohio University. Although the Lybarger Bill failed narrowly to gain passage, in its place was passed the compromise Eagleson Bill, which determined that all doctoral education and research functions would be the role of Ohio State and that the two older institutions would not offer instruction beyond the master's degree level. This arrangement would stand for the next fifty years until population growth had necessitated additional Ph. D programs in the state.

Subsequently, Ohio State's solidifying of its role as the state's flagship, comprehensive university was fairly rapid, as demonstrated by its 1916 induction into the prestigious Association of American Universities. To date, it remains the only public university in Ohio to be extended AAU membership.

This momentum was further accelerated by Governor Harry L. Davis, who in his 1921 inaugural address declared that, "In Ohio State University the commonwealth has an educational institution which should become the largest and best state institution in the United States. This is evidenced by the development of the institution in recent years, and I desire specifically to ask the co-operation of the General Assembly in the effort which I propose to make to help the Ohio State University to attain that goal in the not too distant future." He subsequently shepherded a one-eighth of a mill tax levy through the legislature to fund a university building fund. Seventy-two percent of the funds were earmarked for the Ohio State University with the remainder split between Miami University and Ohio University.[4] By decade's end, the university's enrollment stood at 15,126 a more than fourfold increase from just twenty years prior.

With the onset of the Great Depression, Ohio State would face many of the challenges affecting universities throughout America as budget support was slashed, and students without the means of paying tuition returned home to support families. By the middle thirties, however, enrollment had stabilized due in large part to the role of FERA (the Federal Emergency Relief Administration) and later the NYA (National Youth Administration).[5] By the end of the decade, enrollment had still managed to grow to 17,568. Two important initiatives were also begun during this decade. Each would come to play increasingly important roles in the university's development up to the present time. In 1934, the Ohio State Research Foundation was begun to bring in outside funding for faculty research projects. In 1938, a development office was opened to begin raising funds privately to offset reductions in state support.

The Wexner Center for the Arts building was completed 1989.

In 1952, Ohio State founded the interdisciplinary Mershon Center for International Security Studies, which it still houses. In 2003, the United States Department of Homeland Security decided to base the National Academic Consortium for Homeland Security at the university.

Presently, the university has reached the ranking of becoming a Public Ivy, as well as very receiving high rankings and awards from many institutions, including U.S. News, Academic Ranking of World Universities, The Lombardi Program on Measuring University Performance, Carnegie Foundation for the Advancement of Teaching, and The Public Accounting Report.

The university now provides education to about 59,091 students in eight campuses throughout Ohio and is governed by President Gordon Gee. According to the Chronicle of Higher Education,[6] he will receive a base salary of over $1 million, the highest of any public university president in the United States.