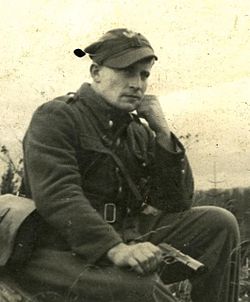 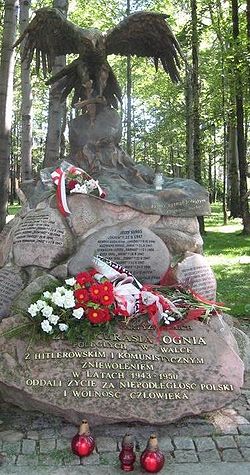 Monument to Kuraś in Zakopane

Józef Kuraś, (noms de guerre "Orzeł" (Eagle), "Ogień" (Fire)) born in 1915 in Waksmund, was a lieutenant in the Polish Army who fought in the Polish September Campaign, a partisan of Armia Krajowa and Bataliony Chłopskie in the Podhale region and after World War II one of the leaders of anticommunist resistance. He died in Nowy Targ on February 22, 1947 from a self inflicted wound after being surrounded by units of Polish secret police. Vilified by communist propaganda, he was officially rehabilitated after the fall of communism. In 2006, the Polish president Kaczynski opened an official memorial in Zakopane, in recognition of his deeds. However, he still remains a somewhat controversial figure.

Józef Kuraś was born in a Goral family with traditions of engagement in social and patriotic activities. From 1936 until 1938 he served in the Polish army, at first in the 2nd Polish Highland Battalion and then in the Border Protection Corps. On February 13, 1939 he married Elżbieta Chorąży. During the Polish September Campaign he fought as part of the 2nd Polish Highland Battalion. After the defeat of Poland, he unsuccessfully tried to make his way to Hungary with a hope of joining the Polish army being formed in France. Eventually he made his way back to his home village where already in November 1939 he joined the anti-Nazi resistance organization ZWZ with a nom de guerre "Orzeł" (Eagle).

In ZWZ and AK

In 1941 "Orzeł" became the leader of a local partisan unit "Konfederacja Tatrzańska" (Tatran Confederation) (KT), associated with the pre-war agrarian Stronnictwo Ludowe (SL) party. On June 29, 1943 the Germans carried out a "pacification" of Waksmund and murdered his father, his wife, his two year old son, sent his two brothers to a concentration camp and burned his house. After this Kuraś changed his pseudonym to "Ogień" (Fire).

In the same year the Gestapo, acting on tips from informants, managed to break up the KT. Those who escaped arrest, including Kuraś ended up joining units of Armia Krajowa, newly formed in the region. At the same time Kuraś kept up his contact with individuals associated with SL.

At the end of December 1943, the Germans, again with help from informants, managed to surprise the partisans and attacked their camp. As a result two members of AK were killed. At the time due to absence of the local AK leader Krystian Wieckowski, "Zawisza", Kuraś, as second in command was in charge. On the initiative of "Zawisza" Kuraś was accused of negligence of duty and blamed for allowing the attack to happen. Despite the fact that Kuraś sent detailed reports and depositions on the incident to the Regional Command of the AK and requested that a thorough investigation be conducted, Kuraś was found guilty and sentenced to death. Because of support of SL members in the AK the sentence was not carried out and in the summer of 1944 it was rescinded.

However as a result of this incident Kuraś left the AK and with a group of close friends joined Bataliony Chłopskie the underground military arm of SL-Roch.

In BCh and cooperation with AL

At the end of 1944, with full knowledge of SL leadership, Kuraś established contacts and began cooperating with a newly arrived unit of Armia Ludowa (AL) "For Free Homeland" led by Lt. Isaac Gutman ("Zygfryd") and Soviet partisans. The motivation was twofold. First, joint actions against Germans could be more effective. Second, the agrarians were hoping to be able to introduce their own people into the local government and police once the Soviets arrived (which at the time seemed imminent) and retain at least local control over the region. A similar strategic plan was implemented by the SL in Małopolska. While most of the joint actions carried out by Kuraś and Gutman where directed against the Germans, apparently, during this period, Kuraś also took part in operations against his former colleagues from Armia Krajowa[citation needed] whom the Soviets and the AL treated as hostile forces. Partly for this reason, but also because of his earlier 'desertion' from the AK, some former AK veterans still regard Kuraś as little more than a common bandit[citation needed].

In December 1944 he delivered a written declaration to Gutman, proclaiming his allegiance to the Soviet controlled PKWN government and voluntarily came under Gutman's command. From then on until the arrival of the Red Army Kuraś together with the AL carried out numerous actions against the Germans. On December 31, 1944, together with Soviet partisans his unit blew up a German train, on January 20, 1945, together with Gutman's unit, he attacked and dispersed a column of German military trucks and finally, on January 27, Kuraś used his knowledge of local terrain to lead several companies of the Red Army through the mountains around Nowy Targ enabling the Soviets to outflank German forces which consequently withdrew without a fight.

Once the Podhale region came under Soviet control, Ogień came out of the mountains and led his men into Nowy Targ where, with approval from Gutman, he transformed his partisans into units of Citizen's Militia (MO) (roughly, a police force). Shortly after, communist authorities established the communist Secret Police, Urzad Bezpieczenstwa (UB), in the region and Kuraś, again on the recommendation of Gutman, became its commander. He used his position to put his people in key regional government and security posts.

However, it soon became apparent that the SL plan aimed at keeping local control through supporters (like Kuraś) was going to fail, particularly as Communist authorities began sending their own people from outside the region and putting them in top command posts. The new commanders of MO and local leaders of the communist party sent reports against Kuraś to the regional UB office in Kraków (Voivode Office of Public Security in Kraków, WUBP) and as a result he was ordered to report to the Kraków office of the UB. On his way there he was warned by friendly contacts that he was going to be arrested. An alternative version of the story reports that Kuraś himself opened the letters he was charged with delivering to the Kraków WUBP among which he found his own arrest warrant. As a result, after a three month period as a nominal director of regional UB, on April 11, 1945, Józef Kuraś once again went "to the mountains" and together with some of his old soldiers created the partisan unit "Błyskawica" (Lighting bolt).

Back to the mountains

Between April 11, 1945 and February 22, 1947 "Ogień" fought against communist authorities, the UB and the NKVD and those who supported the new political system of communist Poland. Most of the controversies surrounding Kuraś come from this period and many events have not been fully explained. During this time Kuraś refused to come under the authority of any other major underground anti-communist political or military organization (such as WiN) and operated completely on his own.

By 1946, companies loyal to Kuraś were active in an area covering most of south central Poland, from the border with Slovakia to the region around Kraków, up to Miechów County.

According to secret police sources which fought against him, "Ogień"'s unit (the Ogniowcy) numbered around 700 soldiers. Out of these, 320 "revealed" themselves as a result of the amnesty law of February 22, 1947 (passed on the same day that Kuraś died) but a good many of them were later arrested, charged and sentenced anyway. 184 members of his unit were captured, and out of those 32 were sentenced to death and 21 were actually executed (the sentences of the rest were commuted). 88 members of the unit died during this period, and this number includes those who were executed on the orders of Kuraś himself for banditry and/or treason (the UB was partly successful in infiltrating his unit). The fate of the rest of the partisans is unknown.

On April 21, 1946 Jozef Kuraś got married for the second time, to Czesława Polaczyk. Both the public wedding in a church in Ostrowsk and the wedding party held the next day in a nearby town were manifestation of Ogień's strength and control over the area.

In the fall of 1946 the communist authorities began a major offensive against Kuraś' partisans. On January 21, 1947, "Ogień", while staying in a friendly village (Ostrowsko) with six of his fighters found himself surrounded by units of UB and MO (altogether numbering around 50 personnel) which had been tipped off as to his whereabouts by one their informants (a UB agent within Kuraś' unit ps. "Wanda"). During the ensuing gun fight two of the Ogniowcy were killed (including "Ogień"'s brother, Krzysztof Kuraś), two managed to escape, while Kuraś himself, along with Irena Olszewska, ps. "Hanka", slipped away and hid in a nearby building. However, after setting fire to the original house in which Kuraś and his men defended themselves, the UB quickly realized what had happened. At that point, Kuraś gave "Hanka" an order to surrender herself and after she did so, shot himself in the head. He did not die immediately and as a result was taken, unconscious to the hospital in Nowy Targ where he died the following day.

He was buried in an unmarked grave whose location remains unknown to his day.

During the communist period in Poland, Kuraś was portrayed as a common bandit, a bloodthirsty anti-Semite who killed Jews and also prosecuted the Slovak population of the region and who prayed on innocent people of Podhale. Most of the accusations are based on the writing of communist propagandist and former secret police chief in Nowy Targ, Władysław Machejek, who in 1955 published a historical novel in which he claimed to present a supposed copy of Kuraś' diary. Modern historians regard Machejek's diary as a fabrication but it continues to be occasionally cited as authentic in Western works.

Most of the controversy around Kuraś centers around material found in his supposed diaries. To complicate matters there are actually three sets of documents that are sometimes referred to as "Kuraś' diary".

The first of these is the diary presented by Machejek in his 1955 book "In the Morning There Came A Hurricane". He claimed that he found the diary after a gun battle with the partisans. This version of the diary is an obvious fabrication but Fear: Anti-Semitism in Poland after Auschwitz quotes the fabricated text.

The second supposed diary comes from another communist writer, Stanisław Wałach, who was also chief of the UB in the region involved in fighting Ogień. Wałach published his version in 1975 in the book "There Once Was A Time In Poland". Whereas the Machejek's version contains much obviously over the top sensationalist information, Wałach's version is more somber. Unlike Machejek who portrays Kuraś as a common bandit, Wałach presents him more as a tragic figure who started out with good intentions but was demoralized by war and lawlessness. It is possible that this version of Kuraś' diary was based on an actual, now lost, diary.

The two versions of the diaries contradict themselves for the most part, although they both relate and comment on some well known incidents associated with Ogień. Since it is unlikely that Kuraś kept two different diaries, at least one, if not both, of these has to be false.

Finally, a set of internal UB documents from Kraków and Nowy Targ became available to historians after fall of communism in Poland. These documents contain information on the fighting between UB and NKVD and Kuraś at the time and were originally prepared for internal use by the secret police only. Together they have also been referred to, perhaps ironically, as "Kuraś' diary". Since the documents were secret and only available to top members of the communist security apparatus most historians regard them as recording factual information and events. In several instances the information contained in them corresponds to that found in the Wałach's version of the diary which indicates that Wałach, who had access to them, might have used them to "reconstruct" Kuraś' diary.