Siemens, REpower, and Vestas are the leading turbine suppliers for offshore wind power. Dong Energy, Vattenfall and E.on are the leading offshore operators.[1] As of October 2010, 3.16 GW of offshore wind power capacity was operational, mainly in Northern Europe. According to BTM Consult, more than 16 GW of additional capacity will be installed before the end of 2014 and the United Kingdom and Germany will become the two leading markets. Offshore wind power capacity is expected to reach a total of 75 GW worldwide by 2020, with significant contributions from China and the United States.[1]

As of October 2010, Danish wind turbine manufacturers Siemens Wind Power and Vestas have installed 91.8% of the world's 3.16 GW offshore wind power capacity, although REpower is now starting to become a major player. Based on current orders, BTM expects 15 GW more between 2010 and 2014.[7]

As of 2010, there are 39 European offshore wind farms in waters off Belgium, Denmark, Finland, Germany, Ireland, the Netherlands, Norway, Sweden and the United Kingdom, with an operating capacity of 2,396 MW. More than 100 GW (or 100, 000 MW) of offshore projects are proposed or under development in Europe. The European Wind Energy Association has set a target of 40 GW installed by 2020 and 150 GW by 2030.[2]

As of November 2010, the Thanet Offshore Wind Project in United Kingdom is the largest offshore wind farm in the world at 300 MW, followed by Horns Rev II (209 MW) in Denmark.

In Europe, as of June 2011, there were 1,247 grid-connected offshore wind turbines with a total capacity of 3,294 MW in 49 wind farms spread over nine countries. Offshore wind farms worth some €8.5 billion ($11.4 billion) are currently under construction in European waters. Once completed, they will represent an additional installed capacity of 2844 MW.[21]

The province of Ontario in Canada is pursuing several proposed locations in the Great Lakes, including the suspended[22] Trillium Power Wind 1 approximately 20 km from shore and over 400 MW in size.[23] Other Canadian projects include one on the Pacific west coast.[24]

As of 2010, there are no offshore wind farms in the United States. However, projects are under development in wind-rich areas of the East Coast, Great Lakes, and Pacific coast.[2]

Most entities and individuals active in offshore wind power believe that prices of electricity will grow significantly from 2009, as global efforts to reduce carbon emissions come into effect. BTM expects cost per kWh to fall from 2014,[7] and that the resource will always be more than adequate in the three areas Europe, United States and China.[1]

The current state of offshore wind power presents economic challenges significantly greater than onshore systems - prices can be in the range of 2.5-3.0 million Euro/MW. The turbine represents just one third to one half[25] of costs in offshore projects today, the rest comes from infrastructure, maintenance, and oversight. Larger turbines with increased energy capture make more economic sense due to the extra infrastructure in offshore systems. Additionally, there are currently no rigorous simulation models of external effects on offshore wind farms, such as boundary layer stability effects and wake effects. This causes difficulties in predicting performance accurately, a critical shortcoming in financing billion-dollar offshore facilities. A report from a coalition of researchers from universities, industry, and government, lays out several things needed in order to bring the costs down and make offshore wind more economically viable:

In 2009, the average nameplate capacity of an offshore wind turbine in Europe was about 3 MW, and the capacity of future turbines is expected to increase to 5 MW.[2]

Offshore turbines require different types of bases for stability, according to the depth of water. To date a number of different solutions exist:

Turbines are much less accessible when offshore (requiring the use of a service vessel for routine access, and a jackup rig for heavy service such as gearbox replacement), and thus reliability is more important than for an onshore turbine.[1] A maintenance organization performs maintenance and repairs of the components, spending almost all its resources on the turbines. Access to turbines is by helicopter or service access vessel. Some wind farms located far from possible onshore bases have service teams living on site in offshore accommodation units.[28]

Because of their remote nature, prognosis and health-monitoring systems on offshore wind turbines will be come much more necessary. They would enable better planning just-in-time maintenance, thereby reducing the operations and maintenance costs. According to a report from a coalition of researchers from universities, industry, and government, supported by the Atkinson Center for a Sustainable Future, [29]making field data from these turbines available would be invaluable in validating complex analysis codes used for turbine design. Reducing this barrier would contribute to the education of engineers specializing in wind energy.

The planning and permitting phase can cost more than $10 million, take 5–7 years and have an uncertain outcome. The industry puts pressure on the governments to improve the processes.[30][31] In Denmark, many of these phases have been deliberately streamlined by authorities in order to minimize hurdles.[32]

Offshore wind resource characteristics span a range of spatial and temporal scales and field data on external conditions. Necessary data includes water depth, currents, seabed, migration, and wave action, all of which drive mechanical and structural loading on potential turbine configurations. Other factors include marine growth, salinity, icing, and the geotechnical characteristics of the sea or lake bed. A number of things are necessary in order to attain the necessary information on these subjects. Existing hardware fore these measurements includes Light Detection and Ranging (LIDAR), Sonic Detection and Ranging (SODAR), radar, autonomous underwater vehicles (AUV), and remote satellite sensing, although these technologies should be assessed and refined, according to a report from a coalition of researchers from universities, industry, and government, supported by the Atkinson Center for a Sustainable Future. [35]

Because of the previous factors, one of the biggest difficulties with offshore wind farms is the ability to predict loads. Analysis must account for the dynamic coupling between translational (surge, sway, and heave) and rotational (roll, pitch, and yaw) platform motions and turbine motions, as well as the dynamic characterization of mooring lines for floating systems. Foundations and substructures make up a large fraction of offshore wind systems, and must take into account every single one of these factors. [36] 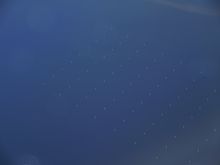 Offshore Wind Turbines in Femern Belt, photograph taken from the sky in 2010, on the fly line between Marseille and Stockholm.
Main article: Environmental effects of wind power#Aesthetics

Offshore wind turbines are less obtrusive than turbines on land, as their apparent size and noise is mitigated by distance. A 2006 Survey by the University of Delaware near the proposed Cape Wind development found that residents most frequently based their decisions to support or oppose the wind farm on perceived impacts to marine life, the environment, electricity rates, aesthetics, fishing and boating.[37]