Office of the President of Croatia

Office of the President of Croatia 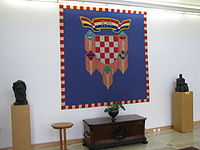 Tapestry in the Office of the President, flanked by a bust of Ante Starčević and a statue of King Tomislav

The Office of the President was created by a presidential decree by Franjo Tuđman on January 19, 1991.[3] The Office is headed by a Chief of Staff (Croatian: Predstojnik ureda), who is appointed by the president. As of November 2011, no Office of the President of the Republic Act has been enacted, even though the constitution requires so. Instead, the presidents declare bylaws regulating composition of the office.[4] The office employs advisors to the president and comprises eight departments, four councils, presidential pardon commission and two decorations and awards commissions.[5] Since February 2010, Joško Klisović is the chief of staff.[6] Net monthly salary of the chief of staff is 19,966 kuna (c. 2,670 euro), while the head of the personal office of the president's salary is 18,198 kuna (c. 2,460 euro) per month..[7][8]

The Presidential Palace (Croatian: Predsjednički dvori, also referred to by the metonym Pantovčak) in Zagreb is the official residence of the president. The president does not actually live in the building as it is used to house the Office of the President of Croatia rather than as a residence. The structure covers 3,700 square metres (40,000 square feet). It is used as the official residence since then president Franjo Tuđman moved there following October 1991 bombing of Banski dvori. In addition to the original building, there is also a 3,500 square metres (38,000 square feet) annex built in 1993, an ancillary structure housing office security services and bomb shelter predating the 1990s.[2] The building, formerly known as Villa Zagorje or Tito's Villa, was designed by architects Vjenceslav Richter and Kazimir Ostrogović and completed in 1964 for the former Yugoslav president Josip Broz Tito.[17][2]