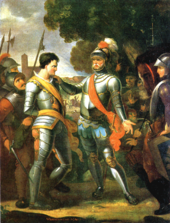 Following his capture in the Battle of the Wild Fields Ocko tom Brok is brought before Focko Ukena. Romanticised history painting by Tjarko Meyer Cramer, 1803

After the early death of his father, Ocko II tom Brok (1407–1435) was Chieftain of the Brokmerland and the Auricherland in East Frisia (initially under the guardianship of his grandmother, Foelke).

Ocko was born in 1407 to Keno II tom Brok, son of Ocko I tom Brok. He was the last East Frisian chieftain from the tom Brok line. Under his reign there was a revolt by the other Frisian chieftains against tom Brok. A conflict with his ally, Focko Ukena, in 1424, led to open conflict in 1426. Ocko married Ingeborg of Oldenburg, and therefore, supported by the counts, asked them for assistance. They sent an army of knights, which was defeated by Focko Ukena and his peasant army on 27 September 1426 in the Battle of Detern. A year later on 28 October 1427, Ocko II was finally defeated at the Battle of the Wild Fields and fell into captivity. He was taken to Leer and imprisoned for four years. In 1435 he died, powerless, as the last of his line in Norden.