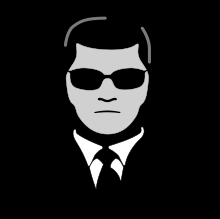 A stylized depiction of a Man in Black.

Men in Black (MIB), in popular culture and in UFO conspiracy theories, are men dressed in black suits who claim to be government agents who harass or threaten UFO witnesses to keep them quiet about what they have seen. It is sometimes implied that they may be aliens themselves. The term is also frequently used to describe mysterious men working for unknown organizations, as well as to various branches of government allegedly designed to protect secrets or perform other strange activities. The term is a generic one, used to refer to any unusual, threatening or strangely behaved individual whose appearance on the scene can be linked in some fashion with a UFO sighting.[1]

Early reports of Men in Black often described them as men of short stature with swarthy complexions, as if they were deeply tanned. Some reported them as Gypsies. Sunglasses, black suits and black cars have been a feature for the entire period since modern sightings began in 1947, but according to UFO historian Jerome Clark, "All MIB are not necessarily garbed in dark suits."

According to the accounts of those reporting encountering them, Men in Black always seem to have detailed information on the persons they contact, as if the individual had been under surveillance for a long period of time. They have been described as seeming confused by the nature of everyday items such as pens, eating utensils or food, as well as using outdated slang, though accounts on the behavior of Men in Black vary widely. Accounts indicate that they often claim to be from an agency collecting information on the unexplained phenomenon their subject has encountered. In other accounts, they seem to be trying to suppress information by, for instance, trying to convince their subject the phenomenon never existed. They have been described as behaving in either an exceedingly furtive manner or a completely outgoing one, with wide grins and disconcerting giggles.[2] In the UFO research community the Men in Black often claim to be from the U.S. Air Force or the CIA. Those who have encountered them say they produce identification, but when verification is later sought, the people described either do not exist, have been dead for some time, or do exist but have a different rank.

Some ufologists[who?] believe that Men in Black are in fact either aliens or androids controlled by aliens. According to this theory, they are sent out in order to cover up alien activity on Earth. All oddities in their appearance and/or behavior may be explained by the Men in Black's extraterrestrial origin and their unfamiliarity with norms of the human society.[citation needed]

Although the phenomenon was initially and most frequently reported in the 1950s and 1960s, some researchers—John Keel and others—have suggested similarities between Men in Black reports and earlier demonic accounts. Keel suggests that MiBs are a modern-day manifestation of the same phenomena that were earlier interpreted as the devil or encounters with fairies. Similarly, folklorist Peter Rojcewicz[3] noted that many Men in Black accounts parallel tales of people encountering the devil: Neither Men in Black nor the devil are quite human, and witnesses often discover this fact midway through an encounter. The meaning of this parallel, however, has been the subject of debate. Even so, the term "the black man" was used for centuries in reference to the Devil,[citation needed] up until contemporary times when "black man" was used to replace the term "Negro" and the satanic sense was lost. In witchcraft trials "The Black Man" was often reported as meeting with the accused and having sexual intercourse with them. In Washington Irving's story "The Devil and Tom Walker" set in 1727, Irving tells how Tom asks "the black man" who he is. The man says he goes by many names and is called the black miner sometimes or the black woodsman. He says that since the Indians are gone, he presides over the persecutions of various religious sects, supports slave-dealers and is the master of the Salem witches. Tom replies that he must be "Old Scratch", which is another name for the devil, and the black man acknowledges that he is Old Scratch. In 1932, H. P. Lovecraft also used the figure of The Black Man in his tale "The Dreams in the Witch-House" as a synonym for the Devil, but also uses the term and description for Nyarlathotep, a malevolent entity of his own creation. In the Middle Ages The Black Man was not a man with African features, but rather a man colored black and dressed in black.

More prosaically, Clark cites Bill Moore, who asserts that "the Men in Black are really government agents in disguise ... members of a rather bizarre unit of Air Force Intelligence known currently as the Air Force Special Activities Center (AFSAC) ... As of 1991, the AFSAC, headquartered in Fort Belvoir, Virginia," and "under the operational authority of Air Force Intelligence Command centered at Kelly Air Force Base in Texas." (Clark, 321–22) Curiously, Moore also reports that AFSAC was inspired by the tales of Men in Black from the 1950s, and had nothing to do with those early accounts. Similarly, Clark notes that Dr. Michael D. Swords has speculated that the Barker/Bender Men in Black case (occurring shortly after the CIA-directed Robertson Panel issued its recommendations to spy on civilian UFO groups) might have been a psychological warfare experiment.

In his article, "Gray Barker: My Friend, the Myth-Maker," John C. Sherwood claims that at age 18, he cooperated when Gray Barker urged him in the late 1960s to develop a hoax - which Barker subsequently published - about what Barker called "blackmen," three mysterious UFO inhabitants who silenced Sherwood's pseudonymous identity, "Dr. Richard H. Pratt."[4]

Men in Black (1997), starring Tommy Lee Jones and Will Smith as Agent K and Agent J, was based on Lowell Cunningham's comic book about a secret organization that monitors and suppresses paranormal activity on Earth - The Men in Black from Aircel Comics. The film was followed by Men in Black: The Series and its 2002 sequel Men in Black II. Men in Black III is scheduled to be released in 2012.[5] Scott Mitchell Rosenberg, who published the comic book, took the property to Sony to become a billion-dollar film franchise.[6] Will Smith made a song called "Men in Black" for the movie Men in Black in 1997.