The occupation and annexation of the Baltic states by the Soviet Union covers the period from the Soviet–Baltic mutual assistance pacts in 1939, to the illegal annexation in 1940, to the mass deportations of 1941. In September and October 1939 the Soviet government compelled the much smaller Baltic states to conclude mutual assistance pacts which gave the Soviets the right to establish military bases there. In the summer of 1940, through intimidation and the presence of the Red Army, the Baltic governments were compelled to resign. Under Soviet surveillance, new governments of Communists and fellow travelers arranged rigged elections. Soon the new puppet governments requested admission into the Soviet Union. The presidents of Estonia and Latvia were imprisoned and later died in Siberia. In June 1941 the new Soviet governments carried out mass deportations of "enemies of the people". Consequently, at first many Balts greeted the Germans as liberators when they occupied the area.[1]

Main article: Background of the occupation and annexation of the Baltic states

After the Soviet invasion of Poland on 6 October, the Soviets pressured Finland and the Baltic states to conclude mutual assistance treaties. The Soviets questioned the neutrality of Estonia following the escape of a Polish submarine from Tallinn on 18 September. A week after on 24 September, the Estonian foreign minister was given an ultimatum in Moscow. The Soviets demanded the conclusion of a treaty of mutual assistance to establish military bases in Estonia.[2][3] The Estonians had no choice but to accept naval, air and army bases on two Estonian islands and at the port of Paldiski.[2] The corresponding agreement was signed on 28 September 1939. Latvia followed on 5 October 1939 and Lithuania shortly thereafter, on 10 October 1939. The agreements permitted the Soviet Union to establish military bases on the Baltic states' territory for the duration of the European war[3] and station 25,000 Soviet soldiers in Estonia, 30,000 in Latvia and 20,000 in Lithuania from October 1939.

In 1939 Finland had rejected similar Soviet demands for military bases on Finnish territory. Consequently, the Soviet Union attacked Finland, starting the Winter War in November. The war ended in March 1940 with Finnish territorial losses, but Finland kept its sovereignty. The Baltic states were neutral in the Winter War and the Soviets praised their relations with the USSR as exemplary.[4] 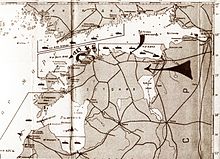 The Soviet troops allocated for possible military actions against the Baltic states numbered 435,000 troops, around 8,000 guns and mortars, over 3,000 tanks, and over 500 armoured cars.[5] On June 3, 1940 all Soviet military forces based in Baltic states were concentrated under the command of Aleksandr Loktionov.[6] On June 9 the directive 02622ss/ov was given to the Red Army's Leningrad Military District by Semyon Timoshenko to be ready by 12 June to a) capture the vessels of the Estonian, Latvian and Lithuanian navies in their bases or at sea; b) capture the Estonian and Latvian commercial fleets and all other vessels; c) prepare for an invasion and landing in Tallinn and Paldiski; d) close the Gulf of Riga and blockade the coasts of Estonia and Latvia in the Gulf of Finland and Baltic Sea; e) prevent an evacuation of the Estonian and Latvian governments, military forces and assets; f) provide naval support for an invasion towards Rakvere; and g) prevent Estonian and Latvian airplanes from flying either to Finland or Sweden.[7]

On June 12, 1940, according to the director of the Russian State Archive of the Naval Department Pavel Petrov (C.Phil.) referring to the records in the archive,[8][9] the Soviet Baltic Fleet was ordered to implement a total military blockade of Estonia. On June 13 at 10:40 AM Soviet forces started to move to their positions and were ready by June 14 at 10 PM: Four submarines and a number of light navy units were positioned in the Baltic Sea, in the Gulfs of Riga and Finland to isolate the Baltic states by the sea; a navy squadron including three destroyer divisions was positioned to the west of Naissaar in order to support the invasion; the 1st marine brigade's four battalions were positioned on the transport ships Sibir, 2nd Pjatiletka and Elton for landings on the islands Naissaare and Aegna; the transport ship Dnester and destroyers Storozevoi and Silnoi were positioned with troops for the invasion of the capital Tallinn; the 50th battalion was positioned on ships for an invasion near Kunda. 120 Soviet vessels participated in the naval blockade, including one cruiser, seven destroyers, and seventeen submarines, along with 219 airplanes including the 8th air-brigade with 84 DB-3 and Tupolev SB bombers and the 10th brigade with 62 airplanes.[10]

On June 14, 1940, the Soviets issued an ultimatum to Lithuania. The Soviet military blockade of Estonia went into effect while the world's attention was focused on the fall of Paris to Nazi Germany. Two Soviet bombers downed the Finnish passenger airplane "Kaleva" flying from Tallinn to Helsinki carrying three diplomatic pouches from the U.S. legations in Tallinn, Riga and Helsinki. The US Foreign Service employee Henry W. Antheil, Jr. was killed in the crash.[11]

On June 15, the USSR invaded Lithuania[12] and Soviet troops attacked the Latvian border guards at Masļenki.[13] On June 16, 1940, the USSR invaded Estonia and Latvia.[12] According to a Time magazine article published at the time of the invasions, in a matter of days around 500,000 Soviet Red Army troops occupied the three Baltic nations—just one week before the Fall of France to Nazi Germany.[14]

Molotov accused the Baltic states of conspiracy against the Soviet Union and delivered an ultimatum to all Baltic countries for the establishment of Soviet-approved governments. Threatening invasion and accusing the three states of violating the original pacts as well as forming a conspiracy against the Soviet Union, Moscow presented ultimatums, demanding new concessions, which included the replacement of their governments and allowing an unlimited number of troops to enter the three countries.[15][16][17][18] Hundreds of thousands Soviet troops entered Estonia, Latvia, Lithuania.[19] These additional Soviet military forces far outnumbered the armies of each country.[20]

The Baltic governments had decided that, given their international isolation and the overwhelming Soviet forces on their borders and already on their territories, it was futile to actively resist and better to avoid bloodshed in an unwinnable war.[21] The occupation of the Baltic states coincided with a communist coup d'état in each country, supported by the Soviet troops.[22]

Most of the Estonian Defence Forces and the Estonian Defence League surrendered according to the orders of the Estonian Government and were disarmed by the Red Army.[23][24] Only the Estonian Independent Signal Battalion stationed in Tallinn at Raua Street showed resistance to the Red Army and "People's Self-Defence" Communist militia,[25] fighting the invading troops on 21 June 1940.[26] As the Red Army brought in additional reinforcements supported by six armoured fighting vehicles, the battle lasted several hours until sundown. Finally the military resistance was ended with negotiations and the Independent Signal Battalion surrendered and was disarmed.[27] There were two dead Estonian servicemen, Aleksei Männikus and Johannes Mandre, and several wounded on the Estonian side and about ten killed and more wounded on the Soviet side.[28][29] The Soviet militia that participated in the battle was led by Nikolai Stepulov.[30]

Sovietization of the Baltic states 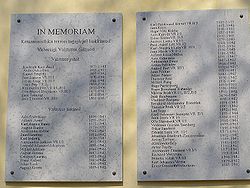 Plaque on the building of Government of Estonia, Toompea, commemorating government members killed by communist terror

Political repressions followed with mass deportations carried out by the Soviets. The Serov Instructions, "On the Procedure for carrying out the Deportation of Anti-Soviet Elements from Lithuania, Latvia, and Estonia", contained detailed procedures and protocols to observe in the deportation of Baltic nationals.

The Soviets began a constitutional metamorphosis of the Baltic states by first forming transitional "People's Governments."[31] Led by Stalin’s close associates,[32] and local communist supporters as well as official brought in from the Soviet Union, they forced the presidents and governments of all three countries to resign, replacing them with the provisional People's Governments.

On July 14–15, following illegal amendments to the electoral laws of the respective states, rigged parliamentary elections for the "People's Parliaments"[33] were conducted by local Communists loyal to the Soviet Union. Because of new election restrictions in the amended electoral laws, only the Communists and their allies were effectively allowed to run.[33][34] The election results were completely fabricated: the Soviet press service released them early, with the result that they had already appeared in print in a London newspaper a full 24 hours before the polls closed.[35][36]

The new Soviet-installed governments in the Baltic states began to align their policies with current Soviet practices.[37] According to the prevailing doctrine in the process, the old "bourgeois" societies were destroyed so that new socialist societies, run by loyal Soviet citizens, could be constructed in their place.[37]