For other uses see Bento (disambiguation). 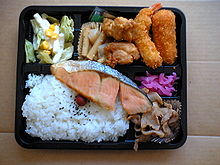 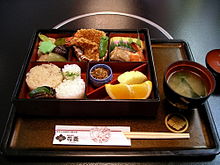 Bento served at a restaurant in Japan

Bento (弁当, bentō?)[1] is a single-portion takeout or home-packed meal common in Japanese cuisine. A traditional bento consists of rice, fish or meat, and one or more pickled or cooked vegetables, usually in a box-shaped container. Containers range from disposable mass produced to hand crafted lacquerware. Although bento are readily available in many places throughout Japan, including convenience stores, bento shops (弁当屋, bentō-ya?), train stations, and department stores, it is still common for Japanese homemakers to spend time and energy for their spouse, child, or themselves producing a carefully prepared lunch box.

Bento can be very elaborately arranged in a style called kyaraben or "character bento". Kyaraben is typically decorated to look like popular Japanese cartoon (anime) characters, characters from comic books (manga), or video game characters. Another popular bento style is "oekakiben" or "picture bento", which is decorated to look like people, animals, buildings and monuments, or items such as flowers and plants. Contests are often held where bento arrangers compete for the most aesthetically pleasing arrangements.

There are similar forms of boxed lunches in the Philippines (Baon), Korea (Dosirak), Taiwan (Biandang), and India (Tiffin). Also, Hawaiian culture has adopted localized versions of bento featuring local tastes after over a century of Japanese influence in the islands.

In the 20th century, the term was imported to modern Mandarin, rendered as 便當, where it retains its older meaning of "convenient" and also refers to bento in mainland China and generic boxed lunches in Taiwan. 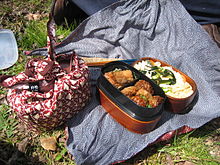 Two typical home made Bento (one open, one wrapped) - note the furoshiki cloths

The origin of bento can be traced back to the late Kamakura Period (1185 to 1333), when cooked and dried rice called hoshi-ii (糒 or 干し飯, literally "dried meal") was developed. Hoshi-ii can be eaten as is or boiled with water to make cooked rice, and is stored in a small bag. In the Azuchi-Momoyama Period (1568 to 1600), wooden lacquered boxes like today's were produced and bento would be eaten during a hanami or a tea party.

In the Edo Period (1603 to 1867), bento culture spread and became more refined. Travelers and sightseers would carry a simple koshibentō (腰弁当, "waist bento"), consisting of several onigiri wrapped with bamboo leaves or in a woven bamboo box. One of the most popular styles of bento, called makuno-uchi bentō ("between-act bento"), was first made during this period. People who came to see Noh and Kabuki ate specially prepared bento between maku (acts). Numerous cookbooks were published detailing how to cook, how to pack, and what to prepare for occasions like Hanami and Hinamatsuri.

In the Meiji Period (1868 to 1912), the first ekibentō or ekiben (駅弁当 or 駅弁, "train station bento") was sold. There are several records that claim where ekiben was first sold, but it is believed that it was sold on 16 July 1885, at the Utsunomiya train station, and contained two onigiri and a serving of takuan wrapped in bamboo leaves. As early schools did not provide lunch, students and teachers carried bento, as did many employees. A "European" style bento with sandwiches also went on sale during this period.

In the Taishō period (1912 to 1926), the aluminum bento box became a luxury item because of its ease of cleaning and its silver-like appearance. Also, a move to abolish the practice of bento in school became a social issue. Disparities in wealth spread during this period, following an export boom during World War I and subsequent crop failures in the Tohoku region. A bento too often reflected a student's wealth, and many wondered if this had an unfavorable influence on children both physically, from lack of adequate diet, and psychologically, from a clumsily made bento or the richness of food. After World War II, the practice of bringing bento to school gradually declined and was replaced by uniform food provided for all students and teachers.

Bento regained its popularity in the 1980s, with the help of the microwave oven and the proliferation of convenience stores. In addition, the expensive wood and metal boxes have been replaced at most bento shops with inexpensive, disposable polystyrene boxes. However, even handmade bento have made a comeback, and they are once again a common, although not universal, sight at Japanese schools. Bento are still used by workers as a packed lunch, by families on day trips, for school picnics and sports days etc. The bento, made at home, is wrapped in a furoshiki cloth, which acts as both bag and table mat.

Bento is also popular in Taiwan. Bendong (Taiwanese: piān-tong) or Biendang (便當, "convenience pack") made its way to Taiwan in the first half of the 20th century from Japan, where it remains very popular to the present day. The term is a loan word from the Japanese word in Taiwanese Hokkien and Taiwanese Mandarin.

Airports also offer an analogous version of the ekiben: bento filled with local cuisine, to be eaten while waiting for an airplane or during the flight. 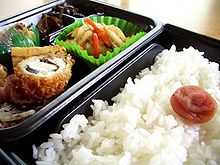 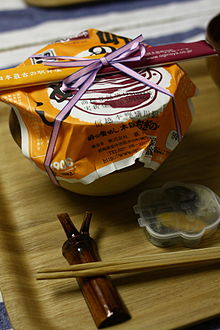