The Bush tax cuts refers to changes to the United States tax code passed during the presidency of George W. Bush that generally lowered tax rates and revised the code specifying taxation in the United States. These were the:

While each act has its own legislative history and effect on the tax code, the JGTRRA amplified and accelerated aspects of the EGTRRA. Moreover, since 2003 the two acts have often been spoken of together, especially in terms of analyzing their effect on the U.S. economy and population and in discussing their political ramifications.

The Bush tax cuts had sunset provisions that made them expire at the end of 2010, since otherwise they would fall under the Byrd Rule. Whether to renew the lowered rates and how became the subject of extended political debate, which was resolved during the presidency of Barack Obama by a two-year extension that was part of a larger tax and economic package, the Tax Relief, Unemployment Insurance Reauthorization, and Job Creation Act of 2010.

Implications for the Alternative Minimum Tax

The 2001 act and the 2003 act significantly lowered the marginal tax rates for nearly all U.S. taxpayers. One byproduct of this tax rate reduction was that it brought to prominence a previously lesser known provision of the U.S. Internal Revenue Code, the Alternative Minimum Tax (AMT). The AMT was originally designed as a way of making sure that wealthy taxpayers could not take advantage of "too many" tax incentives and reduce their tax obligation by too much. It is a parallel system of calculating a taxpayer's tax liability that eliminates many deductions. However the applicable AMT rates were not adjusted to match the lowered rates of the 2001 and 2003 acts, causing many more people to face higher taxes. This reduced the benefit of the two acts for many upper-middle income earners, particularly those with deductions for state and local income taxes, dependents, and property taxes.

The AMT exemption level aspects of the 2001 and 2003 tax cuts, as well as the sunsetting year of capital gains and dividends, were among the tweaks made to the tax code in the Tax Increase Prevention and Reconciliation Act of 2005.

Debate over effect of cuts 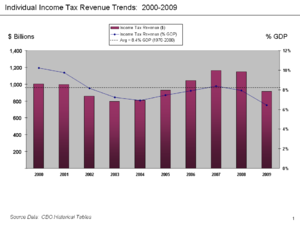 There was and is considerable controversy over who benefited from the tax cuts and whether or not they have been effective in spurring sufficient growth. Supporters of the proposal and proponents of lower taxes claimed that the tax cuts increased the pace of economic recovery and job creation. Further, proponents of the cuts asserted that lowering taxes on all citizens, including the rich, would benefit all and would actually increase receipts from the wealthiest Americans as their tax rates would decline without resort to tax shelters. The Wall Street Journal editorial page states that taxes paid by millionaire households more than doubled from $136 billion in 2003 to $274 billion in 2006 because of the JGTRRA.[1]

The Heritage Foundation alleges that the Bush tax cuts led to the rich shouldering more of the income tax burden and the poor shouldering less;[2] while the Center on Budget and Policy Priorities (CBPP) has shown that the tax cuts have conferred the "largest benefits, by far on the highest income households."[3] The underlying policy has been criticized by Democratic Party congressional opponents for giving tax cuts to the rich with capital gains tax breaks while acknowledging some benefit extended to middle and lower income brackets as well.[4]

Suggestion or speculation by Bush, Vice President Dick Cheney, and Senate Majority Leader Bill Frist that these tax cuts effectively "paid for themselves" has been met with refutations to the contrary from the CBPP,[5] the U.S. Treasury Department and the CBO.[6][7][8][9] Economist Paul Krugman wrote in 2007: "Supply side doctrine, which claimed without evidence that tax cuts would pay for themselves, never got any traction in the world of professional economic research, even among conservatives."[10] Since 2001, federal income tax revenues have remained below the 30-year average of 8.4% of GDP with the exception of 2007, and did not regain their 2000 dollar peak until 2006 (see chart at right).[11]

Some policy analysts and non-profit groups such as OMBWatch,[12] Center on Budget and Policy Priorities,[13] and the Tax Policy Center[14] have attributed much of the rise in income inequality to the Bush administration's tax policy. In February 2007, President Bush addressed the rise of inequality for the first time, saying "The reason is clear: We have an economy that increasingly rewards education and skills because of that education."[15]

Critics state that the tax cuts, including those given to middle and lower income households, failed to spur growth. The cuts also increased the budget deficit, shifted the tax burden from the rich to the middle and working classes, and further increased already high levels of income inequality.[16][17][18][19][20] Economists Peter Orszag and William Gale described the Bush tax cuts as reverse government redistribution of wealth, "[shifting] the burden of taxation away from upper-income, capital-owning households and toward the wage-earning households of the lower and middle classes."[21] Supporters countered that the tax brackets were still more progressive than the brackets from 1986 until 1992, with higher marginal rates on the upper class, and lower marginal rates on the middle class than established by either the Tax Reform Act of 1986 or the Omnibus Budget Reconciliation Act of 1990.

Economist Simon Johnson wrote in 2010: "The U.S. government doesn’t take in much tax revenue—at least 10 percentage points of GDP less than comparable developed economies—and it also doesn’t spend much except on the military, Social Security and Medicare. Other parts of government spending can be frozen or even slashed, but it just won’t make that much difference. That means older Americans are going to get squeezed, while our ability to defend ourselves goes into decline. Just because there’s a bipartisan consensus on an idea, such as tax cuts, doesn’t mean it makes sense. Today’s tax cutters have set us up for tomorrow’s fiscal crisis and real damage to U.S. national security."[22]

Debate over continuation of cuts 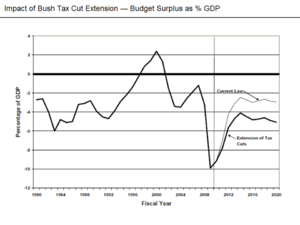 Most of the tax cuts were scheduled to expire December 31, 2010. Debate over what to do regarding the expiration became a regular issue in the 2004 and 2008 U.S. presidential elections, with Republican candidates generally wanting the cut rates made permanent and Democratic candidates generally advocating for a retention of the lower rates for middle-class incomes but a return to Clinton-era rates for high incomes. During his presidential election campaign, then candidate Obama stated that couples with incomes less than $250,000 would not be subjected to tax increases. This income level later became a focal point for debate over what defined the middle class. [23][not in citation given]

In August 2010, the Congressional Budget Office (CBO) estimated that extending the tax cuts for the 2011-2020 time period would add $3.3 trillion to the national debt, comprising $2.65 trillion in foregone tax revenue plus another $0.66 trillion for interest and debt service costs.[24]

The non-partisan Pew Charitable Trusts estimated in May 2010 that extending some or all of the tax cuts would have the following impact under these scenarios:

The non-partisan Congressional Research Service has estimated the 10-year revenue loss from extending the 2001 and 2003 tax cuts beyond 2010 at $2.9 trillion, with an additional $606 billion in debt service costs (interest), for a combined total of $3.5 trillion.[26]

In late July 2010, analysts at Deutsche Bank said letting the Bush tax cuts for those earning more than $250,000 expire would greatly slow economic recovery. However, Treasury Secretary Timothy Geithner said allowing the expiration would not cause such a slowing. The Obama administration proposed keeping tax cuts for couples making less than $250,000 per year.[27] Economist Mark Zandi predicted that making the Bush tax cuts permanent would be the second least stimulative of several policies considered. Making the tax cuts permanent would have a multiplier effect of 0.29 (compared to the highest multiplier of 1.73 for food stamps).[28]

The issue came to a head in late 2010, during a lame-duck session of the 111th Congress.

At the "Slurpee Summit" of November 30, President Barack Obama appointed Treasury Secretary Tim Geithner and Office of Management and Budget chief Jack Lew to help Republicans and Democrats hammer out an agreement on extending the Bush tax cuts.[29] All 42 Republican Senators pledged to block all legislation in the lame-duck session until the tax matter was settled.[30][31]

Congressional Democrats offered two attempts to extend the Bush-era rates for "middle income" families but restore the previous, higher rates for "high income" people. The first proposal had a cutoff at $250,000, while the second raised the dividing line to $1 million. Both proposals were able to pass in the House, but on December 4, 2010, both fell short in the Senate, getting only 53 votes and not the 60 needed for cloture.[32]

On December 6, 2010, President Barack Obama announced a compromise tax package proposal had been reached, centered around a temporary, two-year extension of the Bush tax cuts.[33] In particular, the framework included key points such as:

Administration officials like Vice President Joe Biden then worked to convince wary Democratic members of Congress to accept the plan, notwithstanding a continuation of lower rates for the highest-income taxpayers.[38] The compromise proved popular in public opinion polls, and allowed Obama to portray himself as a consensus-builder not beholden to the liberal wing of his party.[39] The bill was opposed by some of the most conservative members of the Republican Party as well as by talk radio hosts such as Rush Limbaugh and some groups in the Tea Party movement.[40][39] It was also opposed by several leading potential candidates for the Republican nomination in the 2012 presidential election, including Sarah Palin and Mitt Romney,[39] typically on the grounds that it did not make the Bush tax cuts permanent and that it would overall increase the national deficit.[41]

In an interview during these debates, former President Bush said, "I wish they would have called it something other than the 'Bush tax cuts'. There'd probably be less angst amongst some to pass it."[42] He argued strongly for maintaining the rates: "I do believe it's very important to send the signal to our entrepreneurs and our families that the government trusts them to spend their own money. And I happen to believe lower taxes is what stimulates economic growth and what we need now in our country is economic growth."[42]

On December 15, 2010, the Senate passed the compromise package with an 81–19 vote, with large majorities of both Democrats and Republicans supporting it.[43] Near midnight on December 16, the House passed the measure on a vote of 277–148, with only a modest majority of Democrats but a large majority of Republicans voting for the package.[44][45] Before that, an amendment put forward by Democratic Representative Earl Pomeroy and the progressives among the Democratic caucus to raise the estate tax – the ultimate sticking point of the deal for them and the cause of a minor revolt among those against it – failed on a 194–233 vote.[46][44][39] The Washington Post called the approved deal "the most significant tax bill in nearly a decade".[45] President Barack Obama signed the Tax Relief, Unemployment Insurance Reauthorization, and Job Creation Act of 2010, on December 17, 2010.