Oatley railway station is located on the Illawarra line of Sydney's CityRail network, and serves the southern Sydney suburb of Oatley. It consists of an island platform with entry via a subway linking Oatley Parade and Mulga Road at the northern end. There are two sets of points at the city end of the station allowing trains to be terminated on either platform, although these are not currently used in regular timetabled service. Heading south from the city, Oatley is the last station before crossing the Georges River into the Sutherland Shire. 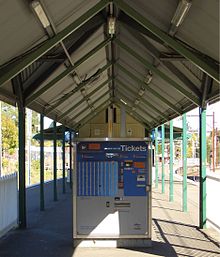 The railway station opened in 1886.[1] Oatley is notable as the end point of the first section of track to be electrified for regular passenger services from Sydney Central in 1926.

The station is served by two trains per hour each way, with additional trains during weekday peak hours.

The station does not have Easy Access for wheelchairs despite a local campaign to achieve this. [2]

Track arrangement at Oatley. Crossovers north of station allow trains to terminate on either platform.