The Oakland General Strike of 2011 was a strike held in Oakland, California on November 2, 2011 as part of the larger Occupy Oakland movement.

Thousands of protesters gathered at Frank Ogawa Plaza to participate in rallies, marches, and teach-ins designed to empower citizens and to draw attention to economic inequity and corporate greed. [1][2] The last general strike in the United States was in Oakland in 1946. Local unions expressed solidarity for the strike including Oakland's largest union, Service Employees International Union Local 1021, Oakland Education Association, International Longshore and Warehouse Union Local 10, and United Brotherhood of Carpenters. While none of the unions were officially on strike, many urged their members to take a personal day, vacation day or to participate after work. [3] 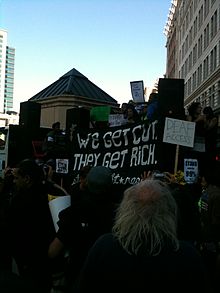 Speakers on the flatbed truck stage

A flatbed truck with a sound system was parked in the middle of the intersection of 14th Street and Broadway and used as a make-shift stage. The morning's rally began at 9 a.m. and a range of people addressed the audience including the scholar/activist Angela Davis and musician Boots Riley.[4] Live musical performances occurred simultaneously in the plaza amphitheater including local hip hop group BRWN BFLO.[5] 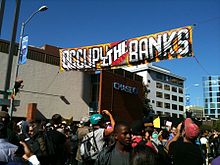 A banner hung in downtown Oakland during a bank march

While most of the day-time activities were peaceful, Oakland Police chief Howard Jordan reported that a small group of "anarchists" vandalized a Whole Foods storefront, and broke windows and ATMs of Bank of America and Wells Fargo banks in the afternoon. [6] [7] Many buildings were vandalized, including some businesses that displayed signs of support for the General Strike. After the incidents of vandalism, members of Occupy Oakland organized to guard local businesses, board up broken windows, and clean graffiti caused by the black bloc vandals. Oakland mayor Jean Quan described the vandals as "a small and isolated group" that "shouldn't mar the overall impact of the demonstration and the fact that people in the 99 percent movement demonstrated peacefully and, for the most part, were productive and very peaceful."[8] 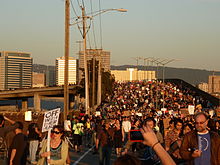 Thousands of protesters marched from Frank Ogawa Plaza to the Port of Oakland, the fifth busiest port in the United States, in two separate groups leaving the plaza at 4:00 pm and 5:00 pm. The number of protesters marching to the port has not been confirmed. While police estimate 7,000 people marched, local organizers [9] and participants [10] put the number somewhere between 20,000 and 100,000. As protesters completely filled Middle Harbor Road, the main road leading to the port, all truck traffic entering or exiting the port was halted. Port operations were "effectively shut down" a couple hours later. [11] During the march a frustrated driver of a Mercedes struck two pedestrians who were taken to the hospital with minor injuries. The driver was questioned by BART police and released. [12]

Later in the evening, a group of protesters took over a vacant building that once served as the headquarters of the Traveler's Aid Society, a non-profit organization that provided services to the local homeless population. Police soon arrived to break up the protesters gathered outside of the building. Some protesters fled while others set a barricade on fire. [13] Police used teargas and flash bangs to try to clear protesters. At least one man was carried away injured after protesters said he was shot in the leg by a rubber bullet. [14] Clashes continued past midnight. 103 people were arrested.

Shortly before 1am, Oakland resident Scott Campbell was shot by police using a less-lethal round while he was filming a stationary line of police in riot gear. The apparently-unprovoked shooting was documented by the resulting point-of-view video from Campbell's own camera.[15] Geoffrey Alpert, a criminal justice professor from the University of South Carolina said watching a video of the incident left him "astonished, amazed and embarrassed" and that "unless there's something we don't know, that's one of the most outrageous uses of a firearm that I've ever seen."[16]

Kayvan Sabeghi, a former U.S. Army Ranger who served in the Iraq War and the War in Afghanistan, was seriously injured while being arrested by police that evening. He was walking away from the late evening protest when he was stopped by police. [17] The organization Iraq Veterans Against the War issued a statement saying that "police struck Sabeghi with nightsticks on his hands, shoulders, ribs and back, and that in addition to a lacerated spleen he suffered from internal bleeding." After 18 hours of being denied medical treatment while in police custody he was transferred to Highland Hospital and put into the intensive care unit. [18] [19]

Journalist Susie Cagle was arrested in the early hours of November 3, jailed, and ultimately charged with a misdemeanor. Cagle subsequently reported having observed mistreatment of protestors during their imprisonment.[20]