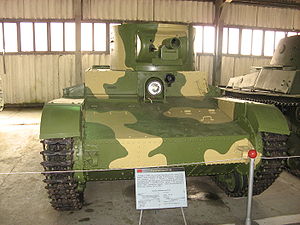 More than 50 different modifications and experimental vehicles based on the T-26 light infantry tank chassis were developed in the USSR in the 1930s, with 23 modifications going into series production. The majority were armoured combat vehicles: flame tanks, artillery tractors, radio-controlled tanks (teletanks), military engineering vehicles, self-propelled guns and armoured personnel carriers. They were developed at the Leningrad Factory of Experimental Mechanical Engineering (from 1935 known as the Factory No. 185 named after S.M. Kirov) by talented Soviet engineers P.N. Syachentov, S.A. Ginzburg, L.S. Troyanov, N.V. Tseits, B.A. Andryhevich, M.P. Zigel and others. Many Soviet tank engineers were declared "enemies of the nation" and repressed during Stalin's Great Purge from the middle of the 1930s. As a result work on self-propelled guns and armoured personnel carriers ceased in the USSR during that time. T-26 light tanks were also modified into armoured combat vehicles in the field during wartime. 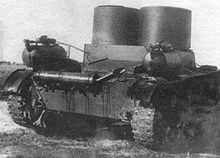 KhT-26 flame-throwing tank. This vehicle was produced in 1935 and partially modernized between 1938 and 1940, when new road wheels with removable bands and an armoured headlight were installed. Kubinka proving ground, 1940.

Flame-throwing tanks formed around 12% of the series production of T-26 light tanks.[1] It should be mentioned that the abbreviation "OT" (Ognemetniy Tank which stands for Flame-throwing Tank) appeared only in post-war literature; these tanks were originally called "KhT" (Khimicheskiy Tank which stands for Chemical Tank), or BKhM (Boevaya Khimicheskaya Mashina; Fighting Chemical Vehicle) in the documents of 1930s. All chemical (flame-throwing) tanks based on the T-26 chassis (KhT-26, KhT-130, KhT-133) were designated BKhM-3. The vehicles were intended for area chemical contamination, smoke screens and for flame-throwing.

The TKhP-3 chemical equipment for smoke screens and chemical contamination was developed in 1932. This equipment could be easily installed on any T-26 light tank and was produced by the "Compressor" Factory, (introduced for smoke screening as the TDP-3 from summer 1934; 1,503 such sets were produced to the end of 1936).[1] 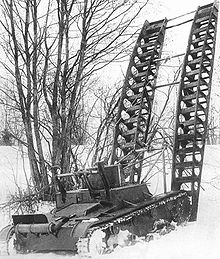 ST-26 engineer tank with a cable system of bridge laying during tests. March 1933.

Additional variants of the ST-26 (with a sliding system of bridge laying and with a tipping system of bridge laying) were also tested from 1932. The first had a massive guide frame and a special boom (the bridge could be laid in 3 min 20 sec, the raise operation took 6-7 min), while the second was equipped with a special swinging-boom with a rack-and-pinion drive. All three variants of the ST-26 participated in military maneuvers of the Leningrad Military District in the summer of 1933; subsequently series production of the ST-26 with a cable system of bridge laying was begun as it proved to be more reliable and less complicated to maintain. The Defence Committee of the USSR ordered the production of 100 ST-26 to the end of 1933, but only 44 vehicles were assembled by the Factory No. 174 by 1934, and 20 in 1935. The delay was attributed to the manufacture of the metal bridges, carried out by the Gipstalmost Factory and several workshops using semi-handicraft techniques.

The Armoured Engineering Section of the Red Army's Research Institute of Engineer Equipment (NIIIT RKKA) in co-operation with the Gipstalmost Factory developed an improved engineer tank at the end of 1936, with a lever hydraulic system of bridge laying (similar to the UST-26, see below) and a small turret of new design. The bridge could be laid in 45 sec and the raise operation took 1.5 min (both processes did not require crew exit). The vehicle was assembled by the Podolsk Machine Factory named after S. Ordzhonikidze in July 1937, and was successfully tested at the NIIIT Proving Ground (85 bridge layings were performed and 70 light tanks passed over the bridge). This ST-26 prototype was also tested at the Kubinka Tank Proving Ground, and participated in military exercises of the Leningrad Military District in 1938. A decision was made in 1939 to produce a batch of engineer tanks with the lever hydraulic system, but the Podolsk Machine Factory could assemble only one. The Stalingrad Tractor Factory probably also produced two such vehicles the same year.

An experimental multispan bridge was developed in 1934 which allowed for the coupling together of three or more ST-26 bridges, using special automatic grips in the end of each bridge section. The multispan bridge employed 250 kg metal columns 2.5 m (8.2 ft) high and was intended for crossings by T-26 and BT light tanks of water obstacles up to 20–50 m (66–160 ft) wide and 3 m (9.8 ft) deep. The launching of each bridge section took 20-30 min. The bridge had no development after testing.

Engineer Alexandrov from the Research and Technology Division of the Red Army's Engineer Directorate (NTO UNI RKKA) developed a wooden tracked bridge 6.5 m (21 ft) long. The bridge was mounted on standard T-26 light tanks as well as on ST-26 engineer tanks and could be laid in 30-60 sec without crew exit. Trials carried out in July–August 1934 were successful and 20 such bridges were issued to the armed forces.

Ten ST-26 engineer tanks were used on the Karelian Isthmus during the Winter War (9 with a cable system and 1 with a lever system); they were included in engineer groups for obstacle clearing that were established in each tank brigade during the war. Three ST-26 tanks of the 35th Light Tank Brigade had the most success (in particular they launched two bridges over a trench and then an antitank ditch for a tank battalion during an assault on the fortified High Point 65.5 (Hottinen area) of the Mannerheim Line on February 18th 1940). The ST-26 with the lever system of bridge laying demonstrated good results and that vehicle was used quite actively during the Winter War, while tanks with the cable system were less reliable and had limited use. There were no losses of ST-26 engineer tanks during the Winter War.

BSNP reconnaissance vehicle. Note the hand-rail radio antenna and two windows for an optical rangefinder on the front side of the armoured cabin. Anti-tank training of soldiers of People's Militia rifle divisions, Leningrad area. July 1941.

an experimental observation version based on the T-26T artillery tractor chassis and intended for reconnaissance of front lines and enemy firing-points; also for correction of artillery fire. Developed by the Design Office of the Military Supply Depot No. 37 in Moscow in September 1934. The single vehicle was built by the Factory No. 185 named after S.M. Kirov in Leningrad and tested with some success in 1935 (nevertheless, the further work was stopped). The TN had an armoured cabin instead of a tank turret, armed with a bow DT tank machine gun (4,980 rds.). Equipment consisted of a 71-TK-1 radio station with a hand-rail antenna around the cabin, a Zeiss optical rangefinder (with a 500 mm base length), a PTK tank commander panoramic sight, gyrocompass, course plotter, field dead-reckoning analyzer, predictor, map-board, SPVO signalling lamp and two UNAF telephones with a cable spool.

The TN, stored at the Factory No. 185, was subsequently rebuilt as the BSNP (bronirovanniy samokhodniy nablyudatel'niy punkt - "armoured self-propelled observation post"), developed by the Artillery Advanced Courses for Command Staff and the Research Institute No. 22 in 1939. The BSNP was equipped with a 71-TK radio station, an Invert optical rangefinder (with 700 mm base length), PTK tank commander panoramic sight, tank magnetic compass, PDN retractable periscope of long-range observation (with 10x optical magnification and 5° angle), two field telephones with two cable spools and a real-time course plotter developed by the Research Institute No. 22. The vehicle was tested in summer 1939 at the Luga Artillery Proving Ground. The inspection commission came to the conclusion that the BSNP was a very useful vehicle for artillery general-purpose reconnaissance and for co-ordination of artillery with tank and infantry units on the battlefield, but that the quality of equipment and its installation was not a successful use of the vehicle. It was recommended to improve the vehicle but all further work was stopped.

An experimental reconnaissance vehicle based on the T-26 mod. 1933 tank chassis, the T-26FT was intended for filming and photography of enemy defensive positions (both at a halt and while on the move). The T-26FT had the usual cylindrical tank turret with a hand-rail antenna, but the 45 mm gun was removed (replaced with a dummy wooden gun); armament consisted of the DT tank machine gun (441 rds.) only. On the left side of the turret two small holes (80 mm in diameter) with electrically-driven armoured lids were fitted for camera lenses. There were two special compartments inside the vehicle: one for filming and photography (equipped with a Kinamo heavy semi-automatic photographic camera, a motion-picture camera, a periscope synchronized with both cameras and a radio station), and one for photographic development (equipped with an Anschütz gyrocompass navigation device, magnifier and developing apparatus). The crew consisted of 3 men (a driver and two camera operators). The single vehicle was built by the Military Supply Depot No. 37 in Moscow in 1937 and tested at the Kubinka Tank Proving Ground in January–February 1938. The vehicle had no further development.

One hundred and eighty three T-26T were produced in 1933. Fourteen more with a high-powered engine and improved towing device were produced in 1936 (including 10 with an armoured cabin). The manufacturer was the Factory No. 174 named after K.E. Voroshilov in Leningrad (a plan to produce 200 T-26T with a canvas cover and 150 T-26T with an armoured cabin annually was not carried out due to increases in tank production). Tests and army service showed that T-26T artillery tractors were underpowered for cross-country towing of trailers weighing more than 5 tonnes (5.5 short tons), so these vehicles had no further development. Also around 20 T-26 light tanks of early models were converted into artillery tractors by army units in 1937-1939. A transfer of overhauled old twin-turreted T-26 tanks (without turrets and armament) from some tank units of western military districts for use as artillery tractors for anti-tank and regimental guns in mechanized corps began in May 1941.

Tank and mechanized infantry units of the Red Army had 211 artillery tractors based on the T-26 chassis on June 1st 1941. Almost all T-26T artillery tractors of border and some inner military districts were lost during the first weeks of the Great Patriotic War. A few remained in front-line service until 1942 at least (for example, the 150th Tank Brigade of the Bryansk Front had a T-26T with an armoured cabin on May 15th 1942, which was used as a command vehicle).

No less than 50 old twin-turreted T-26 tanks of the Transbaikal Military District were converted into artillery tractors from 1941; these vehicles participated in combat with the Japanese Kwantung Army in August 1945.[10]

Many different attached implements for the T-26 light tank were developed in the USSR in the 1930s. Among these were mine sweeps, equipment for swimming, snorkels for deep fording, wooden and brushwood fascines for trench crossing, special extra-wide swamp tracks and mats, wire cutters, dozer blades and many others. All of them were tested but despite often excellent test results none (except some mine sweeps) passed into army service.

Design work started again when the Winter War began: Leningrad factories Kirov Factory, Factory No. 185 and Factory No. 174 developed new models of mine sweeps for the T-26 and T-28 tanks in December 1939. Kirov Factory produced 93 new mine sweeps and Factory No. 174 produced an additional 49. These disc mine sweeps (metal discs 700–900 mm in diameter with a thickness of 10–25 mm on a common axis; the weight of the whole construction was 1,800-3,000 kg) were issued to army field forces in February and March 1940. Despite low explosion resistance (the discs would bend after the first mine explosion), these mine sweeps were used successfully by the 35th tank brigade and tank battalions of the 8th Army during the Winter War.