AmigaOS 4, (abbreviated as OS4 or AOS4), is a line of Amiga operating systems which runs on PowerPC microprocessors. It is mainly based on AmigaOS 3.1 source code, and partially on version 3.9 developed by Haage & Partner.[2] "The Final Update" was released on 24 December 2006 (originally released in April 2004[3]) after five years of development by the Belgian company Hyperion Entertainment under license from Amiga, Inc. for AmigaOne registered users.[4]

During the five years of development, purchasers of AmigaOne machines could download Pre-Release versions of AmigaOS 4.0 from Hyperion's repository as long as these were made available.

On 20 December 2006, Amiga, Inc abruptly terminated[5] the contract with Hyperion Entertainment to produce or sell AmigaOS 4. Nevertheless, AmigaOS 4.0 was released commercially for Amigas with PowerUP accelerator cards in November 2007[6] (having been available only to developers and beta-testers until then). The Italian computer company ACube Systems has announced Sam440ep[7] and Sam440ep-flex motherboards, which are AmigaOS 4 compatible. Also, a third party bootloader, known as the "Moana", was released on torrent sites; it allows installation of the Sam440ep version of OS4 to Mac Mini G4's. However this is both unofficial and unsupported as of today, and very incomplete, especially regarding drivers. During the judicial procedure (between Hyperion and Amiga, Inc),[8] OS4 was still being developed[9] and distributed.[10]

On 30 September 2009, Hyperion Entertainment and Amiga, Inc reached a settlement agreement where Hyperion is granted an exclusive right to AmigaOS 3.1 and market AmigaOS 4 and subsequent versions of AmigaOS (including AmigaOS 5 without limitation).[11] Hyperion has assured the Amiga community that it will continue the development and the distribution of AmigaOS 4.x (and beyond), as it has done since November 2001.[12]

AmigaOS 4 can be divided into two parts; the Workbench and the Kickstart.

The Workbench is the GUI of OS4, a graphical interface file manager and application launcher for the Operating System. It also includes some general purpose tools and utility programs such as a Notepad for typing text, MultiView for viewing images and Amigaguide documents, Unarc for unpacking Archives, a PDF reader, a number of small preferences programs for changing settings of the GUI and OS etc., etc.

The Kickstart contains many of the core components of the OS. Prior to version 4 of AmigaOS the Kickstart had been released mostly on a ROM (included with the computer). In OS4 the Kickstart is instead stored on the hard disk. It consists mainly of:

There have been many different versions of the AmigaOS operating system (OS) during its three decades of history.

The first AmigaOS was introduced in 1985 and developed by Commodore International. It was nicknamed Workbench from the name of its Graphical user interface (GUI), due to an error of Commodore Marketing and Sales Department, which labeled the OS disk just with the name "Workbench Disk" and not with the correct name "AmigaOS Disk (Workbench)". The first versions of AmigaOS (1.0 and up to 1.3) are here indicated with the name of their original disks to preserve original custom.

Workbench 2.0 improvements introduced a lot of major advances to the GUI of Amiga operating system. The blue and orange colour scheme was replaced with a grey and light blue with 3D aspect in the border of the windows. The Workbench was no longer tied to the 640×256 (PAL) or 640×200 (NTSC) display modes, and much of the system was improved with an eye to making future expansion easier. For the first time, a standardised "look and feel" was added. This was done by creating the Amiga Style Guide, and including libraries and software which assisted developers in making conformant software. Technologies included the GUI element creation library gadtools, the software installation scripting language Installer, and the AmigaGuide hypertext help system. 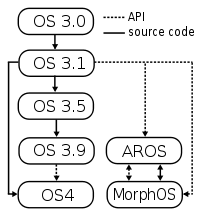 After the demise of Commodore, the later owners of the Amiga trademark granted a license to a German company called Haage & Partner to update the Amiga's operating system. Along with this update came a change in the way people referred to the Amiga's operating system. Rather than specifying "Kickstart" or "Workbench", the updates were most often referred to as simply "AmigaOS". Whereas all previous OS releases ran on vanilla Amiga 500 with 68000 and 512 kB RAM, release 3.5 onwards required a 68020 or better and at least 4 MB fast ram.

In 2001 Amiga Inc. signed a contract with Hyperion Entertainment to develop the PowerPC native AmigaOS 4 from their previous AmigaOS 3.1 release.[14] Unlike the previous versions which were based on the Motorola 68k central processor, OS4 runs only on PowerPC computer systems. Amiga, Inc.'s (current Amiga trademark owners) distribution policies for AmigaOS 4.0 and any later versions required that OS4 must be bundled with all new third-party hardware "Amigas", with the sole exception of Amigas with Phase5 PowerPC accelerator boards, for which OS4 is sold separately. This requirement was overturned in the agreement reached between Amiga, Inc. and Hyperion in the settlement of a lawsuit over the ownership of AmigaOS 4.

Prominent features compared to other operating systems or previous versions of AmigaOS:[15] 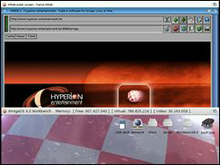 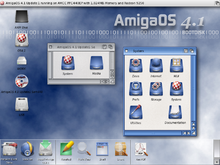 A visit from the Grim Reaper.

The developer pre-release version was a snapshot of AmigaOS 4.0 for AmigaOne. It contained HTML installation guide in English, German, French and Italian and the AmigaOS 4.0 SDK. 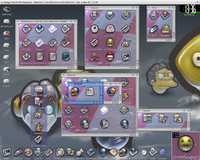 AmigaOS 4.0 Developer Pre-release Update[29] came in the form of a free download for registered users. The update featured a USB stack update (i.e. mass storage support) and numerous bug fixes and enhancements to core components of the system.

The most prominent features of the fourth AmigaOS 4.0 Developer Pre-release Update were the return of the screen dragging ability and the Petunia just-in-time 68k emulator.

The new features in this pre-release include: 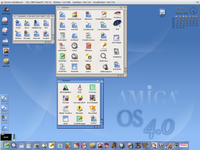 AmigaOS 4.0 Final Update introduced a new memory system based on a slab allocator.[34]

AmigaOS 4.0 for Amiga 1200, Amiga 3000(T) and Amiga 4000(T) series of computers equipped with Phase5 PowerUP PowerPC accelerator cards was put on sale in November 2007. The feature set was equal to the July 2007 update with drivers for Amiga expansion cards and devices[37] and some minor improvements (e.g. AmigaInput).

Update of AmigaOS 4.0 for classic Amiga computers addressed some issues and compatibility problems.

This is a new version and not just a simple update as it features, among others:

On 21 June 2009, Hyperion Entertainment announced the immediate availability of a "Quick Fix" package for AmigaOne, SAM/SAM Flex and Pegasos II.[40] 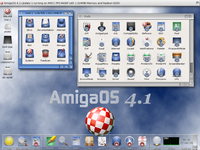 On 14 January 2010, Hyperion Entertainment announced the immediate availability of AmigaOS 4.1 Update 1, the first full update to AmigaOS 4.1. Its features include upgrades to the following:[41]

On 30 April 2010, Hyperion Entertainment announced the immediate availability of Update 2 for AmigaOS 4.1 for AmigaOne, SAM440EP and Pegasos II for registered users.[42]

On August 29 2011 Hyperion Entertainment made availabile [44] Update 3 for AmigaOS 4.1 for AmigaOne, SAM440EP, SAM 460, Classic Amigas with PPC cards and Pegasos II for registered users Final bugfixes and updates for AmigaOS 4.1, new features are reserved for OS 4.2

For the future beyond the recent update to AmigaOS 4.1, Hyperion Entertainment will be working on improving USB support and on improving tools such as the Shell.[45] Some of these new features and improvements will become available in further updates once testing is complete. Such ongoing improvements will continue alongside specific working goals linked to the recently revealed AmigaOne X1000 project, which Hyperion Entertainment has undertaken in partnership with A-Eon Technology. These goals include the introduction of a multiprocessing solution to make full use of the X1000's dual core processor,[46] and may include special support for the Xena customisable co-processor. Other goals in the long term include Java support[citation needed] and improvements to the graphics subsystem to overcome documented limitations in the AmigaOS and its 3D capabilities.

In October 2010, at the yearly Amiga show, AmiWest, AmigaOS 4's future and anticipated features were planned/discussed and/or announced including:[46]