Out of the Ordinary Festival

Out of the Ordinary Festival 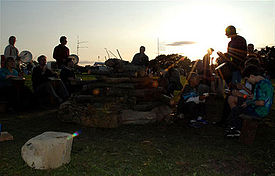 Out of the Ordinary Festival is a family and eco friendly festival near Hailsham- Grid reference TQ 569 088) [1] in the Sussex countryside. The festival celebrates the Autumn Equinox in England.[2] It features a variety of live music, talks and workshops, performances, activities for children with green and ethical businesses, many powered by solar panels and wind generators.[3] It originally started out as a development of The Antiquarian Society in Brighton. The annual festival takes place in England for three days in the Autumn and now has a capacity of 5,000 people. The festival's home for the last four years has been Knockhatch Park, a setting which comprises an ex-landfill site (Arlington Landfill Site, near Hailsham- Grid reference TQ 569 088) [4] in Hailsham, Sussex.[2]

The Out of the Ordinary Festival was started by Stuart Mason and his partner Emily in 2007 on the Sussex Downs near the vale of the Long Man of Wilmington.[5] The festival is now run by director Jim Mitchell and many other dedicated OOTOpians. The Festival has recently (Sept 2011) relocated to a new field, a beautiful tree lined organic pasture backing on to ancient woodland. Filling at the adjacent farm site at Knockhatch ceased in 1974, but to date East Sussex County Council continue to monitor the site for landfill gas and remove leachate to waste water treatment works. The current annual volume of leachate is approximately 200,000 gallons. Festival workshops and talks include such topics as prehistoric culture, ancient knowledge and earth mysteries. This has included yoga, meditation, alternative healing and the chance to use a variety of telescopes, a planetarium and laser guided tours of the constellations. Notable speakers include Professor Gordon Hillman, Jonathan Cainer, Andy Thomas, Edmund Marriage, Leo Rutherford and Robert Bauval.[6]

The festival was divided into seven areas named after each of the seven chakras. The music area was appropriately named the throat chakra with two stages; the Ootopia and Peace Stage, as well as an indoor bar and the Conscious Cabaret. In 2011 the site will feature a new, simplified layout comprising the four elements, though still paying tribute to the seven chakras that define its inner workings. The festival features an eclectic mix of music ranging from Folk to Reggae and Electronic and DJs. Sussex Downs College co-sponsored a solar-powered music stage at the festival in 2010.[6]

Out of the Ordinary Festival has featured many acts that are well known in the alternative scene. Some notable performers include: