King's Highway 28, commonly referred to as Highway 28, is a provincially maintained highway in the Canadian province of Ontario. The route travels in a southwest–northeast from Highway 7 east of Peterborough, to Highway 41 in Denbigh.

Highway 28 north of its southern terminus at Highway 7

Highway 28 begins at an intersection with Highway 7 approximately 7 kilometres (4.3 mi) east of Peterborough. The road that carries Highway 28 continues south as Peterborough County Road 34 (Heritage Line). Proceeding north, Highway 28 crosses the Peterborough Drumlin Field, an area dominated by undulating terrain oriented in a southwest–northeast direction. Despite this, the highway progresses due north without regard for the terrain; numerous cuts and fills have since flattened the route for easier travel. Passing east of Lakefield, the straight path of the route is interrupted by the Otonabee River; it curves northeast and intersects Peterborough County Road 29 (Queen Street) and Road 6 while travelling south of the river. At Young's Point, the southern tip of Stony Lake, the highway crosses the river and serves cottages along the western shore of the lake. Approximately 1 kilometre (0.62 mi) south of Burleigh Falls, the route descends a hill and enters the Canadian Shield; south of this point, the terrain is underlain by limestone and covered by deciduous forests, whereas north of it the terrain is dominated by exposed granite bedrock and coniferous forests.[2] 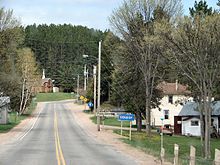 The north-eastern end of Highway 28 in Denbigh

Within Burleigh Falls, Highway 28 encounters the eastern terminus of the former Highway 36. From there it continues northeast through the rugged shield to Highway 118, at which point it has curved fully to the east. The highway passes through Bancroft, where it encounters Highway 62. East of Bancroft, there is relatively little human inhabitation, with the exception of a select group of communities located on or nearby the highway. At the community of Denbigh, Highway 28 ends at a junction with Highway 41.[2]

Highway 28 was assigned in 1928, when the entirety of Highway 12A was renumbered. Highway 12A was one of the original provincial highways assumed in 1919 and 1920.[3] The Port Hope – Peterborough Road was assumed by the Department of Highways on August 11, 1920, extending from Highway 2 (Walton Street) in Port Hope to Highway 7 (George Street North) in downtown Peterborough.[4] The route received the 12A numbering during the summer of 1925.[5] 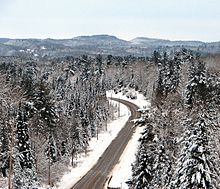 During the 1936 fiscal year, preparations were made for the upcoming merger of the Department of Northern Development and Department of Highway, which occurred on April 1, 1937.[8] The town of Bancroft was chosen as the location of the first operations centre for the new Central District of the department. Consequently, it was decided to extend Highway 28 to the town along the remainder of the Burleigh Falls Road.[9]

The following table lists the major junctions along Highway 28, as noted by the Ministry of Transportation of Ontario.[1][2]