Oracle Financial Software Limited in Citicorp (now Citigroup), wholly owned subsidiary called Citicorp Overseas Software Ltd. (COSL) in 1991. Mr. Ravi Apte carved out a separate company Citicorp Information Technologies Industries Ltd. (CITIL) out of COSL and named Mr. Rajesh Hukku to head CITIL. While COSL's mandate was to serve Citicorp’s internal needs globally and be a cost center, CITIL's mandate was to be profitable by serving not only Citicorp but the whole global financial software market. COSL was the brain child of Mr. Ravi Apte, who convinced Citicorp, while working for Citibank, to start COSL as the offshore captive.

Many of the executive management of Oracle Financial Services, including Rajesh Hukku, R.Ravisankar and NRK Raman were at COSL and moved to CITIL when it was formed.

CITIL started off with the universal banking product MicroBanker (which became successful in some english speaking parts of Africa and other developing regions over the next 3–4 years) and the retail banking product Finware. In the mid-90s, CITIL developed FLEXCUBE at its Bangalore development center after a significant development effort spanning more than 18 months. After the launch of FLEXCUBE, all of CITIL's transactional banking products were brought under a common brand umbrella.

CITIL changed its name to i-flex solutions to reflect its growing independence from Citicorp and to strengthen its FLEXCUBE brand.[3] The name CITIL also made the prospective client banks hesitant about trusting the company with their data, since the name alluded to a close link with Citibank which could be one of their competitors.

The first version of MicroBanker was created at COSL by Ravi Sankaran who migrated to Australia before CITIL was formed. COSL started selling MicroBanker to non-Citi banks in Africa. Ravi Apte the founder CEO of COSL decided to carve out CITIL to focus on non-Citi business. Because non-Citi was the primary target for MicroBanker, MicroBanker was moved to CITIL. Rajesh Hukku was in the United States managing COSL's business development in North America during the time CITIL was formed. It was Mr. Apte who decided to get Hukku back to India to head the newly formed CITIL. 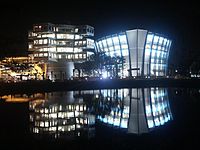 On August 14, 2006, i-flex solutions announced it would acquire Mantas, a US-based anti-money laundering and compliance software company for US$122.6 million. The company part-funded the transaction through a preferential share allotment to majority shareholder Oracle Corporation.

Following its acquisition by Oracle, i-flex has begun an expansion plan reportedly to capitalize on its owner's brand and financial strength.[citation needed] It has invested to expand capacity at its existing locations in India which is reportedly sufficient to accommodate 17,000 employees compared with over 10000 staff already employed by the company in August 2007.[citation needed]

On January 12, 2007, after an open offer price to minority shareholders, Oracle increased its stake in i-flex to around 83%.[4]

On April 4, 2008, the board of directors of i-flex solutions approved a proposal to change the name of the company to Oracle Financial Services Limited, subject to regulatory and shareholder approvals. A press release issued by the company said that "The proposed new name reflects the company's close strategic and operational alignment with its parent, Oracle Corporation, which owns 81 percent of the company." It added that the current management team under N.R.K. Raman, CEO and Managing Director, will continue to run the operations of the company.[5]

On October 24, 2010, Oracle announced the appointment of Chaitanya M Kamat (Chet Kamat) as Managing Director and Chief Executive Officer of Oracle Financial Services Software Limited. Mr. Kamat has also joined the Board of Directors. The outgoing CEO and MD, N.R.K.Raman retired from these posts after 25 distinguished years of service.

On 31st January 2011, Irish banking group AIB launched an €84m legal action against Oracle Financial Services Software in respect of provision of retail banking software. According to High Court admission hearing, "...the implementation of the software product Flexcube was beset with serious technical problems and project management shortcomings between March 2007 and March 2010. By the end of 2009, only 3,000 out of a total of 5m customer accounts had been switched over to the new system. In March 2010, work on implementing the Flexcube product stopped and the bank have had to continue using its existing retail banking system."[6]

The company promotes its BPO business process outsourcing business via its subsidiary Equinox Corporation which is based in Irvine, California.