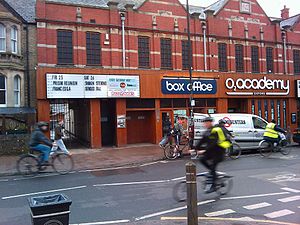 The O2 Academy in Oxford.

'The Zodiac' was a club on the Cowley Road in southeast Oxford. It was known for performances by underrated and up-and-coming bands and was Oxford's main music venue from its reopening in 1995 until 2007, when it was renamed the Carling Academy Oxford.[citation needed] Prior to being The Zodiac it was called the CO-OP Dining Hall and then The Venue. The Zodiac was owned by Nick Moorbath, a local keyboardist who has played with Ride and Hurricane #1; in 2006 he sold the venue to the Academy Music Group.

Although the band have rarely played there, the club has had a long history and association with local band Radiohead. The 1995 refit was partly funded by Radiohead and the video for their early song "Creep" was shot there. More recently[when?] Nick Moorbath was partly responsible for organising Radiohead’s homecoming performance in South Park, Oxford.

The atmosphere was described in Nightshift Magazine as:

"Where it all happens apparently. Unless you're a Uni student straight out of public school in which case it's where all the scary drug pushers, muggers and lefty bohemians hang out. A myth we're more than happy to perpetuate to keep bastards out."

The Zodiac has also been host to many different club nights, including Source (a drum and bass night), Slide (a house night), Smashdisco (a post-punk indie electronight on Thursdays), Transformation (an indie rock night), Trashy (a Retro Pop night) and also several student nights including Fuzzy Ducks and Pop Ya Cherry.

Saturday nights were very popular with the local students and features various genres of music depending on the month. The month of March features Cheese downstairs and Indian upstairs. It had two separate rooms; the downstairs room had a capacity of 350, the upstairs room a capacity of 450 (with a maximum of 750 at any one point)

In late 2006, the Academy Music Group bought the club and spent £3 million pounds on a refurbishment that lasted several months after which it took the name "The Carling Academy Oxford", with three rooms, one larger room for bigger bands that would otherwise bypass the city.

The Zodiac closed its doors with a massive party on May 17th 2007. The last night featured several legendary Oxford bands reformed for the night, including The Candyskins, Dustball, The Nubiles and Unbelievable Truth. The commercial takeover of the city's largest independent music venue prompted the creation of Anyone Can Play Guitar, a documentary film about the Oxford music scene.

Since re-opening as the Carling Academy Oxford, the club has gained the nickname of "The Cardiac"[citation needed]

The venue has welcomed these bands, amongst others, to its stages: