The Name of the Game

The Name of the Game

Infobox Single
Name = The Name of the Game 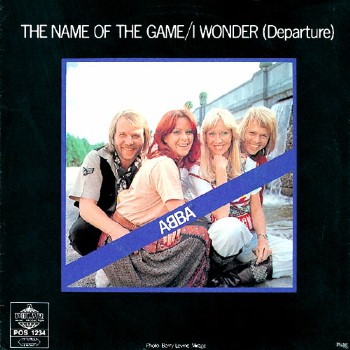 
"The Name of the Game" is the title of a 1977 song by Swedish pop group , and was released as the first single from the group's album, "", their fifth for Polar and their fourth for Epic and Atlantic.

"The Name of the Game", first called "A Bit of Myself", was the first song to be recorded for ABBA's fifth studio album. It was their most complex composition yet — with and sharing the lead vocals but with solo passages from both women — and contained the influences of the laid-back California sound of the day.

The opening riff on bass and synthesiser is inspired by Stevie Wonder's "" from 1976 album "", and both Andersson and Ulvaeus have acknowledged being influenced and inspired by Wonder's music during this era of ABBA's career.

A preliminary version of "The Name of the Game" was worked into the 1977 feature film "". The song had not yet reached its complete version, but when it was eventually finished, it was released as the lead single from "The Album" in October 1977. Originally, another track entitled "Hole in Your Soul" was intended for release, but those plans were soon shelved. "The Name of the Game" was released with "I Wonder (Departure)" as the B-side. This B-side was one of several songs written for the mini-musical "The Girl with the Golden Hair", written by and and originally performed by ABBA on their 1977 world tour.

"The Name of the Game" was not as successful as ABBA's previous singles since 1975. It was more of a top 10 success than a number one-smash, hence why it only topped the UK charts.

It did reach the top 10 almost everywhere else where ABBA were successful, including , , and so on, while in the , where ABBA had arguably not been embraced as strongly as elsewhere, "The Name of the Game" peaked at number 12.

An edited version of "The Name of the Game", which omitted the entire second verse of the song, reducing the length of the track from its original 4:51 to 3:58, was released on a promotional single in the USA. The U.S. radio edit of "The Name of the Game" then apparently - by mistake - found its way onto the 1982 compilation ', and then onto a number of hits packages issued on both vinyl and CD in the 1980s and early 1990s. It also appears on the original 1992 version of the group's ' album. Not until the 1999 remastered edition of "ABBA Gold" did the song appear in its entirety on that compilation.

When released the first digitally remastered CD version of "The Album" in 1997, the fact that one of the nine tracks was nearly a minute shorter than it was supposed to be somehow managed to elude the remastering engineers - the U.S. edit was again used by mistake and the first edition was subsequently withdrawn. ["ABBA - The Complete Studio Recordings", Palm, Carl Magnus, pg126.]

"The Name of the Game" was sampled in 1996 by the for their hit "Rumble in the Jungle", the first time that an ABBA song had been legally sampled by another act. [http://www.imdb.com/name/nm0880744/news]

* A cover of the song was featured on the 1977 album , using uncredited studio musicians and singers. The same recording was later featured on the ABBA tribute album Knowing Me, Knowing You, credited to "Top of the Poppers".
* On the 1995 New Zealand compilation "" the song is covered by Shaynie & Fifi '95.
* The SAS Band - 's All Stars - covered the song on their 1997 debut album with English singer on lead vocals.
* Swedish pop group covered the song on their debut album in 1999, "". Their version, like the U.S. release, omits the second verse.
* The 1999 album, "ABBA: A Tribute - The 25th Anniversary Celebration", includes a rendition by Swedish singer Irma which also eliminates the second verse.
* A dance cover by Abbacadabra was released through in the late 1990s.
* Musician/songwriter recorded a slow ballad version of the song on her "Tribute To ABBA" album, which was produced by her husband .
* On the tribute album "ABBAlicious", which features ABBA covers performed by U.S. , the song is covered by June Bug.
* A /dance version was recorded by Euphorica on the album "ABBA Dance" in 2003. However, this version omits some of the lyrics from the verses.
* American-born German singer covered the song for the German compilation "ABBA Mania".
* Swedish musician Nils Landgren includes a cover on his album "Funky ABBA".
* A cover of the song by Eurosonic can be found on the 2006 compilation "ABBA Chill Out".
* Studio 99 did a full version on their "Studio 99 Perform A Tribute To ABBA, Vol. 1" album.
* In the stage musical "", the song is performed by the characters of Sophie and Bill. In the context of the musical, the song is sung, mainly, by Sophie, who is trying to persuade Bill not to talk to Donna about his possible paternity to Sophie. They come to the possible conclusion that he might be her father and he decides to walk her down the aisle at the wedding. Some of the lyrics in the song are altered to suit the story. In the 2008 movie adaptation of "Mamma Mia!", in (the role of Sophie) performs the song in a deleted scene with .