Ruyi (Chinese: 如意; pinyin: rúyì; Wade–Giles: ju-i; literally "as [one] wishes; as [you] wish") is a curved decorative object that is a ceremonial sceptre in Chinese Buddhism or a talisman symbolizing power and good fortune in Chinese folklore. A traditional ruyi has a long S-shaped handle and a head fashioned like a fist, cloud, or lingzhi mushroom. Ruyi are constructed from diverse materials. For example, the Palace Museum in Beijing has nearly 3000 ruyi that are variously made from valuable materials like gold, silver, iron, bamboo, wood, ivory, coral, rhinoceros horn, lacquer, crystal, jade, and precious gems. The "ruyi" image frequently appears as a motif in Asian art.

The Chinese term ruyi is a compound of ru 如 "as; like; such as; as if; for example; supposing; be like; be similar; accord with" and yi 意 "wish; will; desire; intention; suggestion; thought; idea; meaning; imagination".

Standard Chinese uses ruyi either as a stative verb meaning "as one wishes, as one likes; according to one's wishes; following your heart's desires", or as an adjective meaning "satisfied, pleased, happy, comfortable". The word is combined with suanpan 算盤 "abacus" in the expression ruyi suanpan "wishful thinking; smug calculations".

Chinese classic texts from the Former Han Dynasty (206 BC - 24 AD) have the earliest usages of the word ruyi. For example, the Shiji history uses it both literally for "as one wishes" and for the given name of Liu Ruyi 劉如意 (d. 195 BC), who was the son of Emperor Gaozu of Han and Concubine Qi.

Scholars have proposed two basic theories for the origin of the ruyi, writes Kieschnick (2003:141). The former is that ruyi originated from Sanskrit anuruddha "a ceremonial scepter" used by Buddhist monks in India, who later brought it to China, transliterated as analu 阿那律 or translated as ruyi. The latter theory is that ruyi originated as a backscratcher in early China, and was amalgamated with the Buddhist symbol of authority.

During the Later Han Dynasty (25-220 AD) and Jin Dynasty (265-420 AD), literati and nobles often held ruyi during conversations and other social occasions. It was called a tanbing 談柄 "conversation baton" (cf. the Native American talking stick) and was used much like zhuwei 麈尾 "fly-whisk", which practitioners of the qingtan 清談 "pure conversation" movement popularized during the Six Dynasties period (220-589 AD).

The ca. 554 AD Weishu history records a story that when Emperor Xiaowen of Northern Wei (r. 471-499 AD) wanted to retire from the throne, he tested his sons by letting them choose among a number objects, and the one who selected a bone ruyi (symbolizing political rule) became Emperor Xuanwu of Northern Wei (r. 500-515). Kieschnick (2003:144) concludes "that by the end of the sixth century, now only was the ruyi common at court, but it had even begun to take on emblematic significance as the mark of a ruler." Although the ruyi symbolized imperial political power, it differed from the Western royal scepter because Chinese officials and monks commonly used it.

The ca. 886 AD Duyang zabian 杜陽雜編, which is a collection of Tang Dynasty (618-907 AD) stories, records that Emperor Wenzong presented an ivory ruyi to the scholar Li Xun (d. 835 AD) and said (tr. Kieschnick 2003:145), "The ruyi may serve you as a lecture baton (tanbing)." Ruyi were both emblems of power and tools of discourse.

The ruyi was used in ancient times to give directions or to protect oneself from the unexpected. It was for this reason that it was made or iron, and not on the basis of strictly aesthetic considerations. If you can obtain an old iron ruyi inlaid with gold and silver that sparkle now and them, and if it has an ancient dull color, this is the best. As for ruyi made of natural branches or from bamboo and so on, these are all worthless. (tr. Kieschnick 2003:151)

During the Qing Dynasty (1644-1912 AD), ruyi scepters became luxuriant symbols of political power that were regularly used in imperial ceremonies, and were highly valued as gifts to and from the Emperor of China. Since 3 and 9 are considered lucky numbers in Chinese culture, Qing craftsmen elaborated the traditional handle and head type ruyi into two-headed sanjiang-ruyi 三鑲如意 "3-inlay ruyi" with precious stones set in both heads and middle of the handle and jiujiu-ruyi 九九如意 "9-9 ruyi" presentational sets of nine. The Qianlong Emperor presented a ruyi to the British ambassador George Macartney in 1793, and in his description (quoted by Kieschnick 2003:139-140), "It is a whitish, agate-looking stone, about a foot and a half long, curiously carved, and highly prized by the Chinese, but to me it does not appear in itself to be of any great value." 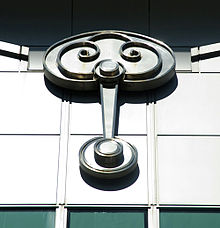 A modern ruyi figure on Taipei 101

During the historical evolution of Chinese ruyi "as one wishes", they have been used as backscratchers, ritual objects in Buddhism and later Daoism, pointers for public speakers, prized icons of political power and wealth, and auspicious gifts expressing best wishes.

In art, ruyi scepters often appear as attributes of Buddhist saints and Daoist xian. The god of prosperity Cai Shen 財神 is often depicted holding a ruyi. Stylized repetitions of the shape are incorporated as a motif in the depiction of heavenly clouds. Ruyi symbolize achieving prosperity in fengshui practice. The ruyi shape appears as a motif in decorative knots, Oriental rug patterns, folk artifacts, and even modern corporate logos. Stylized ruyi often function as a kind of ante-fixae or palmette in traditional and modern architecture.

A maṇi-jewel; magical jewel, which manifests whatever one wishes for (Skt. maṇi, cintā-maṇi, cintāmaṇi-ratna). According to one's desires, treasures, clothing and food can be manifested, while sickness and suffering can be removed, water can be purified, etc. It is a metaphor for the teachings and virtues of the Buddha. … Said to be obtained from the dragon-king of the sea, or the head of the great fish, Makara, or the relics of a Buddha.

There lived in Northern India a Buddhist abbot, "Buddha's vow" by name, who for the sake of mankind sought the "Precious pearl which grants all desires". He went on board a ship and, when in the midst of the sea, by Buddha's power called up the Dragon-king. After having bound him by means of mystic formulae (tantras), he required the pearl from him, whereupon the dragon, unable to escape, took the pearl from his head and prepared to hand it over to the priest. The latter stretched out his left hand, at the same time making the "sword-sign"', a mudrā (mystic finger-twisting), with his right hand. The Dragon-king, however, said: "In former times, when the Dragon-king Sāgara's daughter gave a precious pearl to Cākyamuni, the latter received it with folded hands; why should a pupil of the Buddha accept it with one hand?" Then the priest folded his hands, giving up the mudrā, and was about to take the pearl, when the Dragon-king, no longer suppressed by the mystic sign, freed himself from his bands and ascended to the sky, leaving the abbot behind with empty hands, and destroying his boat. The only man who was saved was the priest himself. Afterwards the same abbot met Bodhidharma, the patriarch, who came across the sea from Southern India (in 526), and together they went to Japan. (tr. de Visser 1913:189)

Erik Zürcher (1997:407) suggests that association between ruyi and the legendary ruyibao "wish-fulfilling gem" explains the dichotomy between it being both a mundane backscratcher and a Buddhist symbol.

In some schools of Zen like Sanbo Kyodan, the ceremonial scepter of a roshi is called kotsu 骨 "bone; relic" instead of nyoi.

The scepter has a slight S-shaped curve, like a human spinal column. The rōshi uses the kotsu, for example, to emphasize a point in a teishō, to lean on when sitting, or also occasionally to strike a student. (Diener, Erhard, and Fischer-Schreiber 1991:119)

Other usages in Chinese 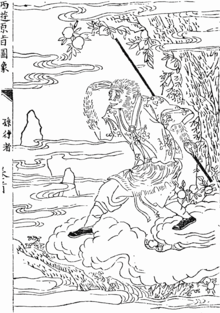 In addition to its use in Buddhist terminology, the Chinese word has other meanings. Ruyi can be a proper noun.

Besides Prince Liu Ruyi (above), Ruyi is used in other personal names.

Ruyi can also be a place name.

Other usages in Japanese 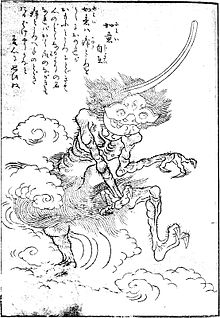 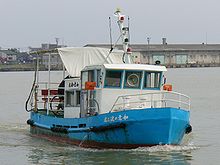 Nyoi no Watashi ferry in Toyama

Besides the Japanese Buddhist temple names above, some other proper names include