Critical mass
This article is about nuclear fission reactions. For other uses, see Critical mass (disambiguation). 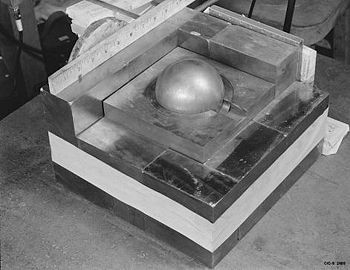 As part of a re-creation of a 1945 criticality accident, a plutonium pit is surrounded by blocks of neutron-reflective tungsten carbide. The original experiment was designed to measure the radiation produced when an extra block was added. Instead, the mass went supercritical.

A critical mass is the smallest amount of fissile material needed for a sustained nuclear chain reaction. The critical mass of a fissionable material depends upon its nuclear properties (e.g. the nuclear fission cross-section), its density, its shape, its enrichment, its purity, its temperature and its surroundings.

When a nuclear chain reaction in a mass of fissile material is self-sustaining, the mass is said to be in a critical state in which there is no increase or decrease in power, temperature or neutron population.

A numerical measure of a critical mass is dependent on the effective neutron multiplication factor k, the average number of neutrons released per fission event that go on to cause another fission event rather than being absorbed or leaving the material. When k = 1, the mass is critical, and the chain reaction is barely self-sustaining.

A subcritical mass is a mass of fissile material that does not have the ability to sustain a fission chain reaction. A population of neutrons introduced to a subcritical assembly will exponentially decrease. In this case, k < 1. A steady rate of spontaneous fissions causes a proportionally steady level of neutron activity. The constant of proportionality increases as k increases.

A supercritical mass is one where there is an increasing rate of fission. The material may settle into equilibrium (i.e. become critical again) at an elevated temperature/power level or destroy itself, by which equilibrium is reached. In the case of supercriticality, k > 1.

Changing the point of criticality

The point and therefore the mass where criticality occurs may be changed by modifying certain attributes such as fuel, shape, temperature, density and the installation of a neutron-reflective substance. These attributes have complex interactions and interdependencies. This section explains only the simplest ideal cases.

It is possible for a fuel assembly to be critical at near zero power. If the perfect quantity of fuel were added to a slightly subcritical mass to create an "exactly critical mass", fission would be self-sustaining for one neutron generation (fuel consumption makes the assembly subcritical).

A mass may be exactly critical at a particular temperature. Fission and absorption cross-sections increase as the relative neutron velocity decreases. As fuel temperature increases, neutrons of a given energy appear faster and thus fission/absorption is less likely. This is not unrelated to doppler broadening of the U238 resonances but is common to all fuels/absorbers/configurations. Neglecting the very important resonances, the total neutron cross section of every material exhibits an inverse relationship with relative neutron velocity. Hot fuel is always less reactive than cold fuel (over/under moderation in LWR is a different topic). Thermal expansion associated with temperature increase also contributes a negative coefficient of reactivity since fuel atoms are moving farther apart. A mass that is exactly critical at room temperature would be sub-critical in an environment anywhere above room temperature due to thermal expansion alone.

In a bomb, a dense shell of material surrounding the fissile core will contain, via inertia, the expanding fissioning material. This increases the efficiency. Because a bomb relies on fast neutrons (not ones moderated by reflection with light elements, as in a reactor) the tamper in a bomb is not functioning as a neutron reflector. Also, if the tamper is (e.g. depleted) uranium, it can fission due to the high energy neutrons generated by the primary explosion. This can greatly increase yield, especially if even more neutrons are generated by fusing hydrogen isotopes, in a so-called boosted configuration.

Critical mass of a bare sphere

Top: A sphere of fissile material is too small to allow the chain reaction to become self-sustaining as neutrons generated by fissions can too easily escape.

Middle: By increasing the mass of the sphere to a critical mass, the reaction can become self-sustaining.

Bottom: Surrounding the original sphere with a neutron reflector increases the efficiency of the reactions and also allows the reaction to become self-sustaining.

The shape with minimal critical mass and the smallest physical dimensions is a sphere. Bare-sphere critical masses at normal density of some actinides are listed in the following table.

The critical mass is inversely proportional to the square of the density. If the density is 1% more and the mass 2% less, then the volume is 3% less and the diameter 1% less. The probability for a neutron per cm travelled to hit a nucleus is proportional to the density. It follows that 1% greater density means that the distance travelled before leaving the system is 1% less. This is something that must be taken into consideration when attempting more precise estimates of critical masses of plutonium isotopes than the approximate values given above, because plutonium metal has a large number of different crystal phases which can have widely varying densities.

Note that not all neutrons contribute to the chain reaction. Some escape and others undergo radiative capture.

Let q denote the probability that a given neutron induces fission in a nucleus. Let us consider only prompt neutrons, and let ν denote the number of prompt neutrons generated in a nuclear fission. For example, ν ≈ 2.5 for uranium-235. Then, criticality occurs when ν·q = 1. The dependence of this upon geometry, mass, and density appears through the factor q.

Given a total interaction cross section σ (typically measured in barns), the mean free path of a prompt neutron is

where n is the nuclear number density. Most interactions are scattering events, so that a given neutron obeys a random walk until it either escapes from the medium or causes a fission reaction. So long as other loss mechanisms are not significant, then, the radius of a spherical critical mass is rather roughly given by the product of the mean free path

Note again, however, that this is only a rough estimate.

In terms of the total mass M, the nuclear mass m, the density ρ, and a fudge factor f which takes into account geometrical and other effects, criticality corresponds to

which clearly recovers the aforementioned result that critical mass depends inversely on the square of the density.

Alternatively, one may restate this more succinctly in terms of the areal density of mass, Σ:

where the factor f has been rewritten as f' to account for the fact that the two values may differ depending upon geometrical effects and how one defines Σ. For example, for a bare solid sphere of Pu-239 criticality is at 320 kg/m2, regardless of density, and for U-235 at 550 kg/m2. In any case, criticality then depends upon a typical neutron "seeing" an amount of nuclei around it such that the areal density of nuclei exceeds a certain threshold.

Aside from the math, there is a simple physical analog that helps explain this result. Consider diesel fumes belched from an exhaust pipe. Initially the fumes appear black, then gradually you are able to see through them without any trouble. This is not because the total scattering cross section of all the soot particles has changed, but because the soot has dispersed. If we consider a transparent cube of length L on a side, filled with soot, then the optical depth of this medium is inversely proportional to the square of L, and therefore proportional to the areal density of soot particles: we can make it easier to see through the imaginary cube just by making the cube larger.

Several uncertainties contribute to the determination of a precise value for critical masses, including (1) detailed knowledge of cross sections, (2) calculation of geometric effects. This latter problem provided significant motivation for the development of the Monte Carlo method in computational physics by Nicholas Metropolis and Stanislaw Ulam. In fact, even for a homogeneous solid sphere, the exact calculation is by no means trivial. Finally note that the calculation can also be performed by assuming a continuum approximation for the neutron transport. This reduces it to a diffusion problem. However, as the typical linear dimensions are not significantly larger than the mean free path, such an approximation is only marginally applicable.

Finally, note that for some idealized geometries, the critical mass might formally be infinite, and other parameters are used to describe criticality. For example, consider an infinite sheet of fissionable material. For any finite thickness, this corresponds to an infinite mass. However, criticality is only achieved once the thickness of this slab exceeds a critical value. 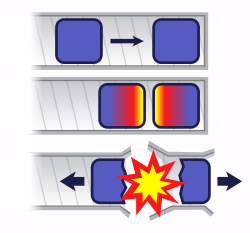 If two pieces of subcritical material are not brought together fast enough, nuclear predetonation (fizzle) can occur, whereby a very small explosion will blow the bulk of the material apart.

Until detonation is desired, a nuclear weapon must be kept subcritical. In the case of a uranium bomb, this can be achieved by keeping the fuel in a number of separate pieces, each below the critical size either because they are too small or unfavorably shaped. To produce detonation, the uranium is brought together rapidly. In Little Boy, this was achieved by firing a piece of uranium (a 'doughnut'), down a gun barrel onto another piece, (a 'spike'), a design referred to as a gun-type fission weapon.

A theoretical 100% pure Pu-239 weapon could also be constructed as a gun-type weapon, like the Manhattan Project's proposed Thin Man design. In reality, this is impractical because even "weapons grade" Pu-239 is contaminated with a small amount of Pu-240, which has a strong propensity toward spontaneous fission. Because of this, a reasonably-sized gun-type weapon would suffer nuclear reaction before the masses of plutonium would be in a position for a full-fledged explosion to occur.

Instead, the plutonium is present as a subcritical sphere (or other shape), which may or may not be hollow. Detonation is produced by exploding a shaped charge surrounding the sphere, increasing the density (and collapsing the cavity, if present) to produce a prompt critical configuration. This is known as an implosion type weapon.