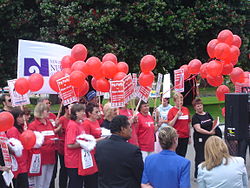 New Zealand originally had nurse education as a part of the hospital system, but, as early as the 1900s, post registration and post graduate programs of study for nurses were in existence. Reforms in the 1970s disestablished the original hospital-based schools and moved these into the tertiary education sector, namely polytechnics and universities. Within the hospital system were an array of titles and levels, which often focused upon clinical specialty rather than generic nursing knowledge.

Today all nurses in New Zealand are educated to degree level via a three year, two semesters per annum, program, with an approximate 50/50 mix of theory to practice. All current students graduate as a registered comprehensive nurse. Legislation exists keeping the number of schools to no more than 21, although some schools run courses in more than one geographical location. Recently, attempts were made to reintroduce the title enrolled nurse with this causing some disagreement between trade unions, the registering body, and health providers.[1]

All nurses in New Zealand are expected to maintain both professional knowledge and clinical competence in order to receive an annual practicing certificate from the Nursing Council of New Zealand (NCNZ). Recent legislation (the 2004 Health Practitioners Competency Assurance Act) sets standards for both scope of practice and requirements in terms of ongoing development.[2]

Similarly the NCNZ caused minor controversy when they gave the title nurse practitioner, thus preventing those with the title from using it. As a nurse practitioner, the nurse must undertake an approved course of study and present a portfolio of evidence to NCNZ for approval. There are now approximately 20 NP's in New Zealand with a smaller number of granted prescribing rights.

New Zealand has historically provided many nurses for the global market place; the salaries in overseas countries (notably Australia, USA, United Kingdom and the Middle East) have proved attractive to NZ nurses. This has resulted in a drop in the number of NZ-educated nurses practicing within New Zealand; recently the flow has been decreased by a substantial pay award for hospital based nurses. This pay award was given to those employed within district health boards but not other public sector providers which caused a degree of conflict within the profession and a return to hospital practice for many in the primary healthcare sector. There has also been an increase in nurses from the United Kingdom, India, South Africa and Philippines migrating to New Zealand.