Apostolic Nunciature to the United States

Apostolic Nunciature to the United States 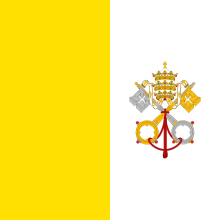 Flag of the Vatican City

The Apostolic Nunciature of the Holy See is the diplomatic mission of the Holy See to the United States. It is located at 3339 Massachusetts Avenue Northwest, Washington, D.C., in the Embassy Row neighborhood.[1] The current Apostolic Nuncio is His Excellency, Archbishop Carlo Maria Viganò, who was named to the position by Pope Benedict XVI on 19 October 2011.

The physical building which houses the offices of the apostolic nuncio and his staff is also called the Nunciature to the United States of America. It is exempt from the jurisdiction of the Archdiocese of Washington (canon 366 1°).

The nunciature was established as the Delegation to the United States of America on January 24, 1893 with offices in the City of Washington in the District of Columbia led by an apostolic delegate. It was the result of an effort by the Holy See to establish communication between the Pope (Leo XIII) and the President of the United States (Benjamin Harrison). Formal relations however were not established until January 10, 1984 when the delegation was elevated to the rank of nunciature. The establishment of an embassy in the City of Washington was the result of an increased friendship of Pope John Paul II and President Ronald Reagan.

The staff of the nunciature includes the permanent and alternative observer to the Organization of American States, given that the OAS headquarters are in Washington.

The Holy See did not have official ties with the United States and its mission was headed by an apostolic delegate without the rank of ambassador. Apostolic delegates, unlike apostolic nuncios, exercise only ecclesiastical functions of oversight over the Catholic hierarchy of the country to which they were sent, while apostolic nuncios have the added responsibility of also acting as ambassadors of the Holy See before the government of the country where they serve. There were instances in which two official delegates served at the same time.

In 1990 and 1991 the Vatican quietly began to use the title of nuncio instead of pro-nuncio for its ambassadors who were not the deans of a country's ambassadorial corps, but it retained the pro-nuncio title for all those already appointed. In 1998, when President Bill Clinton accepted the credentials of Archbishop Gabriel Montalvo Higuera as the third Vatican ambassador to the United States, he held the title of Apostolic Nuncio. Since 1993 the official Vatican yearbook, the Annuario Pontificio, has included an asterisk behind the title of those nuncios "che (per ora) non sono Decani del Corpo Diplomatico" -- "who (for now) are not deans of the diplomatic corps."