Numismatic history of the United States

Numismatic history of the United States

The numismatic history of the United States began with Colonial coins and paper money; most notably the foreign but widely accepted Spanish piece of eight [1], ultimately descended from the Joachimsthaler and the direct ancestor of the U.S. Dollar [1].

The Spanish Piece of Eight, used widely as currency in Colonial America and the ancestor of American coinage

Paper money would not be printed by the United States until 1917. [2]

The then-fledgling United States Government under the Washington administration minted the first coins in 1792, the half disme, according to legend minted from Martha Washington's silverware. [3]

In the early days, often years went by without a certain denomination being minted.

Seated Liberty era and introduction of the Double Eagle, Nickel and small cent (1836 - 1891) 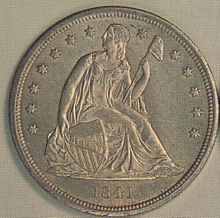 In 1849, in the wake of the California Gold Rush, the Double Eagle, or $20 gold denomination was added [4] This coin contains nearly a pure ounce of gold and were minted in large quantities; many still exist today and are used as bullion coins and command only a modest premium over spot price, though many dates are rare as well. The Liberty Head Double Eagle was minted up to 1907.

Rising copper prices caused the reduction of the size of the cent. Originally, pennies were large and heavy. This changed between 1856 and 1857 when they were replaced by the small-sized Flying Eagle cent, which was made of 88% copper and 12% nickel, and had a somewhat pale brown color. In 1859 this was replaced by the Indian Head cent, and by 1864, the Civil War increased nickel and copper prices and the cent was made thinner and the nickel removed; the cent was thus now a small, thin bronze coin.

The five cent nickel coin was introduced in 1866, and gradually it made the half dime obsolete. To this day, the nickel, though the design has changed, retains the same metallic content it had from its inception.

The second half of the 19th century saw several odd coin denominations. The two cent piece was made from 1864 to 1873, and was the first American coin to display the term In God We Trust; a result of the increased wartime religiosity during the Civil War. three cent pieces made of silver, then copper-nickel were also made around this era. From 1875 to 1878, Twenty cent pieces were made in the Seated Liberty design. A Three-dollar piece of gold was minted from 1854 to 1889.

In 1878 the first Morgan Silver Dollars were minted; this series lasted until 1904 and was revived for several months in 1921.

Turn of the century American coinage, the introduction of paper money and the end of gold coins (1892 - 1932) 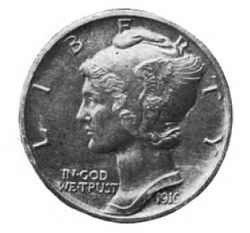 The year 1892 saw the designs of Charles E. Barber, also designer of the Morgan dollar, adorn the dime, quarter and half dollar. His Liberty Head nickel had debuted in 1883, and thus from the years 1892 to 1904, his designs were featured on every denomination from 5 cents up to one dollar. The Barber design would last on dimes and quarters up to 1916, on half dollars up to 1915, and on the nickel up to the extremely rare and famous 1913 Liberty Head nickels.

The United States minted paper money, called Federal Reserve Notes, for the first time in 1917. Originally, these were backed by gold, and a note could be, at least in theory, exchanged for gold coin at a bank until 1933 when gold was confiscated from the general public. Silver certificates were exchangeable for silver coin up to the year 1964.

The design of the American One dollar bill has stayed almost the same since 1935, and the other denominations had a similar appearance until their redesign in the late 1990s.

The Peace Dollar was minted from 1921 to 1933. After 1933, no more gold coins or silver dollars would be minted by the US Mint until the bullion and commemorative series that began in the 1980s and continue to the present day. 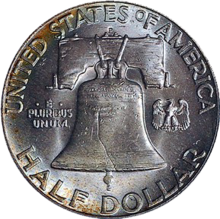 Reverse side of a Franklin Half Dollar

As there were no more gold coins or silver dollars after the Executive Order 6102 of 1933 minted in the United States, paper notes took place of the coin denominations above 50 cents. Up to 1964, dimes, quarters and half dollars were still minted in 90% silver; halves would contain 40% silver from 1965 to 1970.

The new tradition of placing past presidents and Founding Fathers on coins, began with the 1909 Lincoln cent, continued in the 1930s and 1940s, with the introduction of the Washington quarter in 1932, the Jefferson nickel in 1938, the Roosevelt dime in 1946, and the Franklin half dollar in 1948. The original Washington quarter design remained unchanged, aside from the removal of silver content and finer details, until 1998, the Jefferson nickel until 2003, and the Roosevelt dime to the present day. The Franklin half was replaced by the John F. Kennedy half dollar in 1964 to commemorate him after his murder.

The last silver coins are dated 1964 [5], though they were actually minted for several years later dated as 1964. In 1982, the penny had most of its copper content removed, and is now made primarily of zinc, with a thin copper plating.

The paper money of the United States was re-designed to deter counterfeit through the late 1990s and early to mid 2000s.

American coinage and paper money has gone through significant changes since the late 1990s. Up to the mid 1990s American money had changed little since the end of silver coins in the mid 1960s, and some of the denominations, including the paper notes and the nickel, had barely changed since the 1930s.

Beginning in 1996 with the $100 and $50 bills, paper money was redesigned to deter counterfeit. In 1999, the State Quarter program ended the classic design of the Washington quarter. Next came the 2004 nickels, meant to commemorate Lewis and Clark's 200th anniversary. The cent was re-designed in 2009 to commemorate Abraham Lincoln's 200th birthday.

The dollar coin returned in 1999, in a case very similar to the 1921 Morgan dollar, the Susan B. Anthony dollar returned in 1999, to fill in until the Sacagawea Dollar came about in 2000. Concurrent is the Presidential Dollar series. 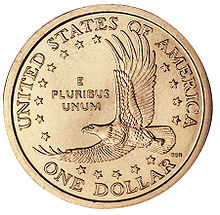