"Number 1" is an electronic–dance song performed by British group Goldfrapp. The song was written and produced by Alison Goldfrapp and Will Gregory for the duo's third album Supernature (2005). The song is based around a synthesizer and bass arrangement and was written about the importance and meaningfulness that somebody shares with another, despite that it might not necessarily last.[1]

The song was released as the album's second single in October 2005 to positive reviews from music critics. It was a commercial success, reaching the top forty on the majority of the charts it entered, and topped the U.S. dance chart. The song has been remixed a number of times and was featured in advertising campaigns for the U.S. retail company Target. The song was also used in the British TV show Ideal.

"Number 1" is a mid-tempo electronic love song about the importance and meaningfulness that somebody shares with another, despite that it might not necessarily last. The song was composed as a collaborative effort between Alison Goldfrapp and Will Gregory in late 2004 in the countryside of Bath, England.[1] The song was written and recorded while Goldfrapp and Gregory were jamming in the recording studio, bouncing song ideas off each other.[2] According to Goldfrapp, the song's lyrics are "a little bit more reflective and sensual" than those she had composed on Felt Mountain (2000) and Black Cherry (2003).[3]

"Number 1" is written in the common verse-chorus form and features instrumentation from synthesizers and a bass guitar. It contains a synth and bass arrangement that the duo would use frequently on the rest of Supernature. Most of the song was composed on an old Roland String synth keyboard because Goldfrapp enjoyed the sounds that it exudes.[2]

The music video for "Number 1" was directed by Dawn Shadforth and filmed in London, England in 2005.[4] The video is set in a plastic surgery clinic where the staff and the patients, except Alison Goldfrapp, have a dog's head and a human body. The video's theme is a reference to the song's lyrics in which Goldfrapp sings "I'm like a dog to get you". The video depicts the story of a white poodle who is being operated on by great dane and yorkshire terrier surgeons (the receptionist and attendant nurses are saluki). Scenes of Alison Goldfrapp acting like a dog and dancing with the clinic's staff are intercut throughout the video.

The video premiered in the UK in early October 2005.[4] The complete version of "Number 1" featured in the music video has been released commercially through CD singles and digital downloads, and some include remixes by Alan Braxe and Fred Falke. 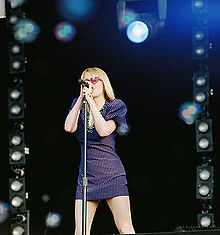 In October 2005, Goldfrapp performed "Number 1" on British television shows and toured Europe, playing the single and other new songs.[5] The duo performed only one concert in North America at the Nokia Theatre in New York City on 5 December 2005. The U.S. concert sold out rapidly, which overwhelmed Goldfrapp who did not expect the large turnout.[6] In late 2006, "Number 1" was featured in Christmas advertising campaigns for the U.S. retail company Target. The song, along with "Fly Me Away", was featured in six winter-themed television commercials.[7]

"Number 1" was released as a various formats throughout the world. While most territories received a CD single and digital download release, the single was released as a vinyl single in November 2005 in the UK.[8] A DVD single was also issued and included the "Postcards from the Summer" music video and a special performance film for "Satin Chic".[9]

"Number 1" received positive reviews from music critics. MusicOMH.com's Michael Hubbard described it as a "warmer, calmer and cosier" song than previous single "Ooh La La", and wrote that "it maintains those Numanoid synth riffs that Goldfrapp now do so well".[10] Allmusic gave the song a strong review, indicating it as a track pick from the album, commenting that "Number 1" "nails the laid-back sexiness that many of the other slower songs [on Supernature] attempt".[11] Stylus Magazine gave Supernature a C+ rating but called the song "refreshing and effective",[12] while About.com wrote that the track was "a stunning profession of love served up over electronic burbles and bouncy bass."[13]

"Number 1" entered the UK Singles Chart on 7 November 2005 at number nine, remaining on the chart for four weeks.[14] Outside of the UK, the song was also successful. It reached number twenty-nine in Ireland and became Goldfrapp's second top fifty single on the singles chart.[14] The song reached the top forty in Italy and the top one-hundred in Germany.[14]

In Canada, the song was released on 1 November 2005, and debuted at number twelve on the singles chart before rising to number seven eighteen weeks later.[15] Although the single sold considerably, "Number 1" did not chart on the Canadian BDS Airplay chart, receiving most of its sales from its fans in the dance clubs. Due to favourable reception, "Number 1" was released in the United States. Goldfrapp had previously found success in the dance clubs with "Strict Machine" (2003), and "Number 1" became their second consecutive release to reach the top of the Billboard Dance Chart.[16] The song also reached number one on the Hot Dance Airplay and Hot Dance Singles Sales charts.[17]

Alan Braxe and Fred Falke made the most well-known remix of the song, titled the "Alan Braxe and Fred Falke Main Mix", which was included on the CD single. The track, over seven minutes long, uses Goldfrapp's original vocals and features more prominent beats and synthesizers. The remix received mixed reviews from music critics. Stylus Magazine labeled it one of the "best club mixes",[18] while Pop Journalism Magazine called the remix "dismal" and a poor choice.[19] Braxe and Falk also created two other remixes, "Alan Braxe and Fred Falke Club Remix" and "Alan Braxe and Fred Falke Instrumental Remix", which appeared on the UK vinyl single. Icelandic electronic group Múm created the "Múm Remix", which provided the song with a minimalist ambient sound. The remix was included on Goldfrapp's remix album We Are Glitter in 2006, and the home console version of the dancing video game Dance Dance Revolution SuperNOVA 2 in 2007. A cover version by Jont appears on the 2007 compilation album, The Saturday Sessions: The Dermot O'Leary Show.

These are the formats and track listings of major single releases of "Number 1".

The following people contributed to "Number 1":[20]