The locus coeruleus (also spelled locus caeruleus or locus ceruleus), is a nucleus in the brainstem involved with physiological responses to stress and panic. It was discovered in the 18th century by Félix Vicq-d'Azyr.

The name is derived from the Latin words coeruleus and locus. Literally, this means "the blue spot", a name derived from its azure appearance in unstained brain tissue. The color is due to light scattering from melanin in noradrenergic (producing or activated by norepinephrine) nerve cell bodies. Caeruleus is the classical Latin spelling, but coeruleus is the more common spelling. The spelling ceruleus, formed by contraction of the digraph ae or oe into e, is an American English form. 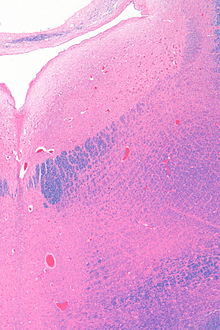 Micrograph showing the locus coeruleus (upper-right of image) in an axial section of the pons. The fourth ventricle (quasi-triangular white area) is in the upper left of the image. The midline is seen on the left. The large white area in the upper-left corner is where the cerebellum would be. HE-LFB stain.

The locus coeruleus (or "LC") is in the dorsal wall of the rostral pons in the lateral floor of the fourth ventricle. It is composed of mostly medium-size neurons. Melanin granules inside the neurons of the LC contribute to its blue color. Thus, it is also known as the nucleus pigmentosus pontis, meaning "heavily pigmented nucleus of the pons." The neuromelanin is formed by the polymerization of noradrenaline and is analogous to the black dopamine-based neuromelanin in the substantia nigra.

The projections of this nucleus reach far and wide. For example, they innervate the spinal cord, the brain stem, cerebellum, hypothalamus, the thalamic relay nuclei, the amygdala, the basal telencephalon, and the cortex. The norepinephrine from the LC has an excitatory effect on most of the brain, mediating arousal and priming the brain’s neurons to be activated by stimuli.

As an important homeostatic control center of the body, the locus coeruleus receives afferents from the hypothalamus. The cingulate gyrus and the amygdala also innervate the LC, allowing emotional pain and stressors to trigger noradrenergic responses. The cerebellum and afferents from the raphe nuclei also project to the LC, particularly the raphe pontis and raphe dorsalis.

The locus coeruleus receives inputs from a number of other brain regions, primarily:

Psychiatric research has documented that enhanced noradrenergic postsynaptic responsiveness in the neuronal pathway (brain circuit) that originates in the locus coeruleus and end in the basolateral nucleus of the amygdala is a major factor in the pathophysiology of most stress-induced fear-circuitry disorders and especially in posttraumatic stress disorder (PTSD). The LC neurons are probably the origin of the first or second “leg” of what has been recently termed the "PTSD candidate circuit." Combat-related PTSD (in a 2005 study of deceased American army veterans from World War II) was shown to be associated with a postmortem diminished number of neurons in the locus coeruleus (LC) on the right side of the brain.[3] The role of the LC in PTSD may explain the dramatic effectiveness of two generic medications, propranolol and prazosin for the secondary prevention and treatment of PTSD, respectively.[citation needed]

The locus coeruleus is responsible for mediating many of the sympathetic effects during stress. The locus coeruleus is activated by stress, and will respond by increasing norepinephrine secretion, which in turn will alter cognitive function (through the prefrontal cortex), increase motivation (through nucleus accumbens), activate the hypothalamic-pituitary-adrenal axis, and increase the sympathetic discharge/inhibit parasympathetic tone (through the brainstem). Specific to the activation of the hypothalamo-pituitary adrenal axis, norepinephrine will stimulate the secretion of corticotropin-releasing factor from the hypothalamus, which induces adrenocorticotropic hormone release from the anterior pituitary and subsequent cortisol synthesis in the adrenal glands. Norepinephrine released from locus coeruleus will feedback to inhibit its production, and corticotropin-releasing hormone will feedback to inhibit its production, while positively feeding to the locus coeruleus to increase norepinephrine production.[4]

The LC's role in cognitive function in relation to stress is complex and multi-modal. Norepinephrine released from the LC can act on α2 receptors to increase working memory, or an excess of NE may decrease working memory by binding to the lower affinity α1 receptors.[5]

The genetic defect of the transcriptional regulator MECP2 is responsible for Rett syndrome.[7] A MECP2 deficiency has been associated to catecholaminergic dysfunctions related to autonomic and sympathoadrenergic system in mouse models of Rett Syndrome (RTT). The Locus Coeruleus is the major source of noradrenergic innervation in the brain and sends widespread connections to rostral (cerebral cortex, hippocampus, hypothalamus) and caudal (cerebellum, brainstem nuclei) brain areas[8] and.[9] Indeed, an alteration of this structure could contribute to several symptoms observed in MECP2-deficient mice. Changes in the electrophysiological properties of cells in the locus ceruleus were shown. These Locus Coeruleus cell changes include hyperexcitability and decreased functioning of its noradrenergic innervation.[10] Interestingly, a reduction of the tyrosine hydroxylase (TH) mRNA level, the rate-limiting enzyme in catecholamine synthesis, was detected in the whole pons of MECP2-null male as well as in adult heterozygous female mice. Using immunoquantification techniques, a decrease of TH protein staining level, number of locus coeruleus TH-expressing neurons and density of dendritic arborization surrounding the structure was shown in symptomatic MECP2-deficient mice.[11] However, locus coeruleus cells are not dying but are more likely losing their fully mature phenotype since no apoptotic neurons in the pons were detected.[11] Researchers have concluded that "Because these neurons are a pivotal source of norepinephrine throughout the brainstem and forebrain and are involved in the regulation of diverse functions disrupted in Rett Syndrome, such as respiration and cognition, we hypothesize that the locus ceruleus is a critical site at which loss of MECP2 results in CNS dysfunction. Restoration of normal locus ceruleus function may therefore be of potential therapeutic value in the treatment of Rett Syndrome.[10] This could explain why a norepinephrine reuptake inhibitor (desipramine, DMI) which enhances the extracellular NE levels at all noradrenergic synapses ameliorated some Rett syndrome symptoms in a mouse model of Rett syndrome.[11]

There is up to 70% loss of locus ceruleus neurons in Alzheimer's disease.[12] Mouse models of Alzheimer's disease show accelerated progression after chemical destruction of the locus ceruleus [13] The norepinephrine from locus ceruleus cells in addition to its neurotransmitter role locally defuses from "varicosities". As such it provides an endogenous antiinflammatory agent in the microenvironment around the neurons, glial cells, and blood vessels in the neocortex and hippocampus.[14] It has been shown that norepinephrine stimulates mouse microglia to suppress Aβ-induced production of cytokines and their phagocytosis of Aβ.[14] This suggests that degeneration of the locus ceruleus might be responsible for increased Aβ deposition in AD brains.[14]