According to a 2010 survey of energy accidents, there have been at least 56 accidents near nuclear reactors in the United States (defined as incidents that either resulted in the loss of human life or more than US$50,000 of property damage). The most serious of these was the Three Mile Island accident in 1979. Davis-Besse Nuclear Power Plant has been the source of two of the top five most dangerous nuclear incidents in the United States since 1979.[1] Relatively few accidents have involved fatalities.[2]

Globally, there have been at least 99 (civilian and military) recorded nuclear reactor accidents from 1952 to 2009 (defined as incidents that either resulted in the loss of human life or more than US$50,000 of property damage, the amount the US federal government uses to define major energy accidents that must be reported), totaling US$20.5 billion in property damages. Property damage costs include destruction of property, emergency response, environmental remediation, evacuation, lost product, fines, and court claims.[2] Because nuclear reactors are large and complex accidents onsite tend to be relatively expensive.[3]

At least 56 nuclear reactor accidents have occurred in the USA. Relatively few accidents have involved fatalities.[2] The most serious of these U.S. accidents was the Three Mile Island accident in 1979. According to the Nuclear Regulatory Commission, Davis-Besse has been the source of two of the top five most dangerous nuclear incidents in the United States since 1979.[1]

The Atomic Energy Act of 1954 encouraged private corporations in the United States to build nuclear reactors and a significant learning phase followed with many early partial core meltdowns and accidents at experimental reactors and research facilities.[4] This led to the introduction of the Price-Anderson Act in 1957, which was "an implicit admission that nuclear power provided risks that producers were unwilling to assume without federal backing".[4]

Nuclear reactor accidents continued into the 1960s with a small test reactor exploding at the Stationary Low-Power Reactor Number One in Idaho Falls in January 1961 resulting in three deaths which were the first fatalities in the history of U.S. nuclear reactor operations.[5] There was also a partial meltdown at the Enrico Fermi Nuclear Generating Station in Michigan in 1966.[4]

The large size of nuclear reactors ordered during the late 1960s raised new safety questions and created fears of a severe reactor accident that would send large quantities of radiation into the environment. In the early 1970s, a highly contentious debate over the performance of emergency core cooling systems in nuclear plants, designed to prevent a core meltdown that could lead to the "China syndrome", received coverage in the popular media and technical journals.[6][7]

In 1976, four nuclear engineers -- three from GE and one from the Nuclear Regulatory Commission—resigned, stating that nuclear power was not as safe as their superiors were claiming.[8][9] These men were engineers who had spent most of their working life building reactors,[10][11] and they testified to the Joint Committee on Atomic Energy that:

"the cumulative effect of all design defects and deficiencies in the design, construction and operations of nuclear power plants makes a nuclear power plant accident, in our opinion, a certain event. The only question is when, and where.[8] 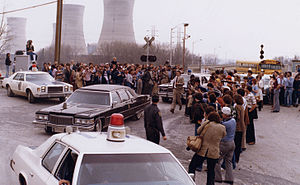 On March 28, 1979, equipment failures and operator error contributed to loss of coolant and a partial core meltdown of Unit 2's pressurized water reactor at the Three Mile Island Nuclear Power Plant in Pennsylvania. [12] The scope and complexity of this reactor accident became clear over the course of five days, as a number of agencies at the local, state and federal levels tried to solve the problem and decide whether the ongoing accident required an emergency evacuation, and to what extent.

The World Nuclear Association has stated that cleanup of the damaged nuclear reactor system at TMI-2 took nearly 12 years and cost approximately US $973 million.[13] Benjamin K. Sovacool, in his 2007 preliminary assessment of major energy accidents, estimated that the TMI accident caused a total of $2.4 billion in property damages.[14] The health effects of the Three Mile Island accident are widely, but not universally, agreed to be very low level.[15][13]

The TMI accident forced regulatory and operational improvements on a reluctant industry, but it also increased opposition to nuclear power.[16] The accident triggered protests around the world.[17]

This list is incomplete; please help to expand it.

Nuclear safety in the U.S. is governed by federal regulations and continues to be studied by the Nuclear Regulatory Commission (NRC). The safety of nuclear plants and materials controlled by the U.S. government for research and weapons production, as well those powering naval vessels, is not governed by the NRC.[19][20]

Following the Fukushima Daiichi nuclear disaster, according to Black & Veatch’s annual utility survey that took place after the disaster, of the 700 executives from the US electric utility industry that were surveyed, nuclear safety was the top concern.[21] There are likely to be increased requirements for on-site spent fuel management and elevated design basis threats at nuclear power plants.[22][23] License extensions for existing reactors will face additional scrutiny, with outcomes depending on the degree to which plants can meet new requirements, and some of the extensions already granted for more than 60 of the 104 operating U.S. reactors could be revisited. On-site storage, consolidated long-term storage, and geological disposal of spent fuel is "likely to be reevaluated in a new light because of the Fukushima storage pool experience".[22]