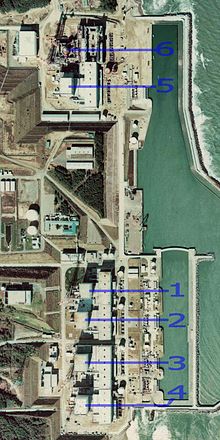 Fukushima 50 is the alias given by the media to a group of employees at the crippled Fukushima I Nuclear Power Plant. Following the 2011 Tōhoku earthquake and tsunami, a related series of nuclear accidents resulted in a serious fire at the plant's unit 4 on 15 March 2011, these 50 employees remained on-site after 750 other workers were evacuated.[1][2]

After TEPCO management proposed withdrawing all its employees from the plant on 14 March,[3] additional manpower was deployed from around Japan.[4] Some workers traveled on clear roads by convoy from Tokyo.[4] When they arrived, hundreds of firemen, SDF personnel and employees of TEPCO, convened 20 km from the plant and debated how to best stabilize the plant.[4] On the night of the 15th of March, these workers joined the original Fukushima 50. In the following days, extra workers continued to be added, and the Fukushima 50 remained the name used by media to refer to the group of workers at Fukushima.

The number of the workers involved rose to 580 on the morning of 18 March[1] as staff from the Kashiwazaki-Kariwa Nuclear Power Plant and workers installing the new power line joined in. More than 1,000 workers, firefighters and soldiers were toiling at the site on 23 March.[5][6] The Fukushima 50 were drawn from Toshiba, Hitachi, Kajima, firefighters from Tokyo, Osaka[7] , Yokohama,[8] Kawasaki, Nagoya and Kyoto, TEPCO and its subsidiaries such as Kandenko,[9] TEP Industry and TEP Environmental Engineering, and many small-to-mid-size companies that have contracts with these big companies.[1][10]

Over 20 workers had been injured by 18 March, including one who was exposed to a large amount of ionizing radiation when the worker tried to vent vapour from a valve of the containment building.[1] 3 more workers were exposed to radiation over 100 mSv, and 2 of them were sent to a hospital due to beta burns on 24 March.[11] Two other workers, Kazuhiko Kokubo, 24, and Yoshiki Terashima, 21, were killed by the tsunami while conducting emergency repairs immediately after the quake. Their bodies were found on March 30.

The workers and volunteers were assigned the mission of stabilizing the reactors. Their activities included assessing the damage and radiation levels caused by the explosions, cooling stricken reactors with seawater and preventing any risk of fire. These workers remained on-site despite risks of radiation poisoning.[12] Levels of radiation on site are far higher than in the 20 km exclusion zone and media outlets reported that the severity of the situation could have grave implications on their future health, with possibly fatal consequences for the workers.[13] On March 18, according to Prime Minister Naoto Kan the workers were "prepared for death".[14]

A day before the unit 4 fire, a complete withdrawal proposed by TEPCO was rejected by the prime minister,[15][16][17] to continue attempts at bringing the reactors under control during the Fukushima Daiichi nuclear disaster.

The workers are reported to be taking turns eating and sleeping in a two-story earthquake-resistant building at the center of the complex constructed in July last year,[2] with ABC News reporting the refuge area was about "the size of an average living room."[18]

A daily schedule at Fukushima I nuclear plant[19] according to the article on 28 March.

During some work, in high radiation areas, the workers are limited to 15-minute sessions inside the damaged buildings.[20]

The international limit for radiation exposure for nuclear workers is 20 millisievert (20 mSv, or 2 rem) per year, averaged over five years, with a limit of 50 mSv in any one year, however for workers performing emergency services United States Environmental Protection Agency (EPA) guidance on dose limits is 100 mSv when "protecting valuable property" and 250 mSv when the activity is "life saving or protection of large populations."[21]

Prior to the accident, the maximum permissible dose for Japanese nuclear workers was 100 mSv in any one year, but on 15 March 2011, the Japanese Health and Labor Ministry enforced the permitted 250 mSv limit, in light of the situation at the Fukushima Nuclear Power Plant.[22][23] However, the workers at Fukushima plant declined the elevated 250 mSv limit and kept adopting the previous 100 mSv.[24] Tokyo Enesys, a TEPCO's subsidiary, adopts 80 mSv to manage the radiation level monitoring with some buffer. Kandenko, Kajima and Taisei Corporation adopted 100 mSv. Hitachi rewrote internal rule as 200 mSv.[25] TEPCO decided to move workers around 200mSv to low-radiated site while its subsidiaries, Tokyo Enesys and Kandenko, adopted around 100mSv limit. One TEPCO worker has already been moved due to the radiation at 198 mSv.[26] Over 30 workers are radiated beyond 100 mSv by 23 April 2011.[26]

The workers wore hazmat suits and hazmat masks, carrying dosimeters that alerted at 80 millisieverts. Each worker had to stop the operation once the dosimeter alerted.[29] According to TEPCO, seven workers were exposed to radiation over the limit of 100 millisievert by the morning of March 20. All the workers were from TEPCO.[30]

In context, immediate symptoms become apparent if exposed to above 250 mSv per day. Symptoms include nausea and loss of appetite as well as damage to bone marrow, lymph nodes and the spleen. Generally, these symptoms become more severe and noticeable in the 1000 to 3000 mSv bracket with recovery probable, but not assured. New and more serious symptoms appear above 3000 mSv such as peeling of the skin, hemorrhaging and sterility with death if left untreated.

The Fukushima 50 were present when an explosion and fire occurred at the Unit 4 reactor.[31] There is confusion as to what extent radiation may have been released as a result of this incident with the Japanese Government appearing to be tight-lipped about the situation for fear of causing panic, while some suggested they are not being wholly transparent.[32]

Originally there were approximately 800 workers on 11 March 2011, the day the earthquake and tsunami struck. On 15 March, workers deemed non-essential were withdrawn by the Tokyo Electric Power Company totalling around 750 workers due to increased risk and consequently leaving around 50. It was on this day, the media started to call the remaining workers the "Fukushima 50".

However, on the morning of the 16 March the remaining workers had to be evacuated for a brief period of time due to a radiation spike which was detected which could be harmful to the workers health. It was reported that when they returned to the plant, a further 130 or so workers joined their colleagues to total of around 180 to stabilise the reactors.[33] The number of workers rose to 580 on the morning of the 18 March.[1] By 12 April, approximately 700 workers were working on-site.[34]

By 21 March 2011, Toshiba had sent a 100-strong team to two Fukushima plants as part of a task-force of 700 Toshiba workers organized at Toshiba's Isogo Engineering Centre to defuse the nuclear crisis, and Hitachi had dispatched 120 to Fukushima I and formed a 1000-strong task force.[35][36]

Referring to the original 50 workers, nuclear researcher Dr. Eric Hall opined that they were likely to be older, and unlikely to have further children, so the long-term effects of exposure to high-levels of ionizing radiation would be less likely to appear before a natural death.[37][38] Some younger workers have been injured[9] and young Osaka firefighters have been operating at the site.[7] Since then, a group of 250 skilled senior citizens has volunteered to work in the radioactive environment, citing reduced harm to them.[39][40]

Over 20 workers had been injured by 18 March.[1] 3 workers were exposed and 2 were rushed to hospital having up to 180 mSv, which is less than the maximum 250 mSv that the government is allowing for workers at the plant.[11] Both workers, one in his twenties and one in his thirties, were from Kandenko and were regular workers at Fukushima II nuclear power plant.[9] Another worker was from a contract company of Kandenko.[52]

Reaction of media and public

Media outlets lauded the remaining workers bravery as "heroes", and as a result they have become known in the media as the "Fukushima 50". France 24 called them "Japan's faceless heroes",[54] British newspaper, The Guardian wrote: "Other nuclear power employees, as well as the wider population, can only look on in admiration".[55] They have been compared to the 47 Ronin.[56] In Hong Kong, a group of netizens at HKGolden Forum dedicated Cantonese and Japanese lyrics based on a Cantopop song, entitled "福島烈士─向福島50人致敬" (Deadly Heroes of Fukushima - Tribute to the Fukushima Fifty), to the workers.[57][58][59]

According to Robert Hetkämper, a correspondent for the German television network ARD, the label "Fukushima 50" has been invented by a foreign newspaper, and then has been imported by the Japanese media. The "Fukushima 50" would include engineers as well as unskilled workers, and there would be grounds to suspect that many workers would not be really aware of the dangers of their assignment.[60]

On September 7, 2011, the "Fukushima Heroes" were honored with the Prince of Asturias Award for Concord.[61]